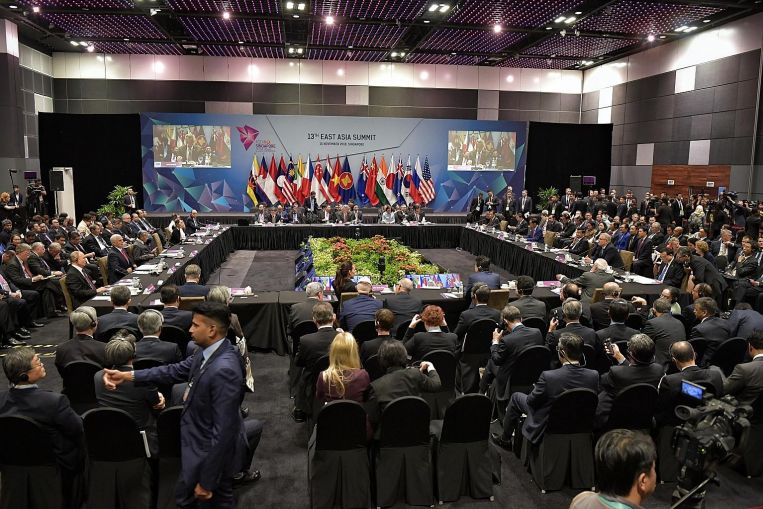 Thailand assumes ASEAN chairmanship amid challenges
(16 November 2018) Thailand unveiled the theme of its ASEAN chairmanship—Advancing Partnership for Sustainability—at the closing ceremony of the 33rd ASEAN Summit in Singapore. Thai Prime Minister Prayut Chan-o-cha acknowledged that while ASEAN is recognized internationally, much remains to be done as it still faces many challenges such as trade and political competition, disruptive technologies and transnational crime. Thailand’s priorities as the 2019 chair will include boosting infrastructure connectivity, rules and regulations, and people-to-people links to create a seamless ASEAN. He also promised to put sustainability at the centre of all issues and elevate ASEAN’s role in addressing global issues such as climate change.
Read more>>

Myanmar forms new investment ministry
(20 November 2018) Myanmar’s Union Parliament approved the establishment of a new Ministry of Investment and Foreign Economic Relations on November 19. According to Myanmar Attorney-General Tun Tun Oo, the new ministry will be a merger between the Foreign Economic Relations Department and the Directorate of Investment and Company Administration (DICA), both of which are presently under the Ministry of Planning and Finance. Further, the new ministry aims to bolster domestic and foreign investment and ensure that investments are socially and environmentally responsible. The new ministry will include solutions to enhance the flow of investment-related information and dispute resolution mechanisms for investors. Myanmar President U Win Myint also appointed the incumbent national security advisor and government office minister U Thaung Tun as the new ministry’s head.
Read more>>

Vietnam and Russia aim to nearly triple trade to US$10 billion by 2020
(20 November 2018) Vietnamese Prime Minister Nguyen Xuan Phuc and Russian Prime Minister Dmitri Medvedev announced several agreements to enhance bilateral cooperation during a meeting in Hanoi on November 19. The leaders agreed to increase bilateral trade to US$10 billion by 2020 from US$3.55 billion in 2017 and cooperate more closely to ensure more effective implementation with the Russian-led Eurasian Economic Union. Further, the two countries will facilitate bilateral trade in farm produce, seafood, and joint energy investment projects. Russia is Vietnam’s biggest weapons supplier and Russian companies are involved in numerous Vietnamese energy projects. Additionally, Vietnam was the fourth largest importer of Russian wheat after Egypt, Turkey and Bangladesh in the 2017/2018 marketing season.
Read more>>

Thailand plans to link EEC with southern corridor
(16 November 2018) Plans for a Southern Economic Corridor (SEC) to be connected to Thailand’s existing Eastern Economic Corridor (EEC) and form a massive trade hub linking the Pacific and Indian oceans, is in the works. According to minister in the Thai Prime Minister’s Office Kobsak Pootrakool, approval for a US$606 million investment package will be sought from the Cabinet for the project which will cover the four provinces of Chumphon, Ranong, Surat Thani and Nakhon Si Thammarat, plus a link to the EEC. The proposed development will comprise a seaport in Ranong province, double-track rail linking Chumphon and Ranong provinces, as well as road investments. The proposed investment budget will be submitted for Cabinet approval by early December. Meanwhile, the draft city plan for the EEC will also be ready for public input in early December.
Read more>>

Study to shed light on air connectivity in the Mekong region
(19 November 2018) A study on air connectivity between Cambodia, Laos, Myanmar and China will be carried out under the Mekong Lancang Cooperation Framework. According to the Cambodian State Secretariat for Civil Aviation (SSCA), the study will strengthen knowledge base on the Mekong region’s air transport industry thus helping industry players to enhance air connectivity and airport facilities which in turn, will boost economic and sectoral (such as tourism) growth. Cambodia’s three international airports received 8.5 million passengers—a 22% increase—from January to October 2018, with expectations of reaching 10 million visitors by year-end. According to the Pacific Asia Travel Association, the number of air links in the Mekong region is very limited and it hopes that the study will improve the current situation.
Read more>>