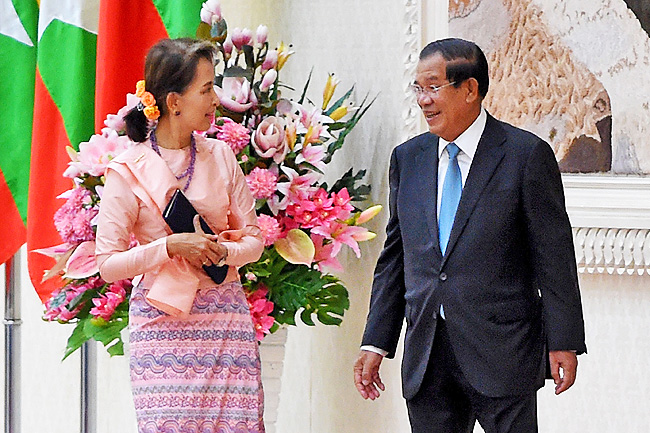 Myanmar State Councillor visits Cambodia to boost bilateral ties
(1 May 2019) Myanmar State Councillor Aung San Suu Kyi arrived in Cambodia on April 29 for a three-day visit to boost bilateral ties between the countries. The State Councillor held meetings with senior Cambodian officials including Prime Minister Hun Sen, during which they discussed elevating cooperation in sectors such as economics, tourism and education. Furthermore, Hun Sen also announced 10 scholarships for Myanmar students in the coming academic year. According to tourism figures from the Cambodian government, the country saw an 18% increase year-on-year in Myanmar visitors last year, reaching 22,500 visitors. However, trade and investment between the countries remain relatively weak.
Read more>>

Thailand, Laos governments sign MoC for development of BRI rail project
(26 April 2019) The Thai, Lao and Chinese governments inked a Memorandum of Cooperation (MoC) for the development of the Nong Khai-Vientiane rail line on the sidelines of the Belt and Road Forum (BRF) in Beijing. The rail line is part of China’s larger Belt and Road Initiative (BRI) and its rail bridge will be built near the existing Thai-Lao Friendship Bridge. According to Thai transport minister Arkhom Termpittayapaisith, Thailand and Laos will each bear 50% of the cost of constructing the bridge, while China will provide technical assistance for the construction. He added that they hope to complete the Thai-Lao rail bridge by 2023 so that it can be connected to the Sino-Thai high-speed railway’s Nakhon Ratchasima-Nong Khai route once the route is also completed.
Read more>>

Lao government issues new law for railway development
(30 April 2019) Lao President Bounnhang Vorachit announced on April 30 a new Law on Railways to govern the development and management of railways in the country. The 50-page legislation outlines principles and regulations to encourage effective, efficient and environmentally-friendly railway development. The law includes provisions that encourage local and foreign investors to invest in railway infrastructure through public-private partnerships and concessions; pre-construction requirements for developers such as creating a feasibility study, survey and plans; the compensation processes for stakeholders affected by railway development; and regulations for the management of railway services and related logistics services.
Read more>>

Industry players predict a bleak 2Q 2019 for Thai exports due to external factors
(1 May 2019) Thailand’s trade-related authorities expect the country’s exports to slow in the second quarter of 2019 against a backdrop of external risks and uncertainties, according to a report on a joint meeting held on April 30 between the Thai International Trade Promotion Department (ITPD), Thai Board of Trade, and the country’s top 10 exporting groups. The Board of Trade expects the value per unit of exports to fall and overall shipments to grow only 2.1% this year. According to the board’s vice chair Sanan Angubolkul, Thailand’s export competitiveness will also suffer once the EU-Vietnam free trade pact takes effect this year and the US trims the list of products under its Generalized System of Preferences (GSP). According to the Commerce Ministry, Thai exports saw a 1.6% year-on-year contraction to US$61.98 billion in the first quarter of the year, while its imports fell 1.2% year-on-year reaching only US$59.98 billion.
Read more>>

Vietnam’s April trade deficit estimated at US$700 million
(29 April 2019) The Vietnamese government’s General Statistics Office reported that the country recorded a US$700 million deficit in April, down from a US$1.63 billion surplus in March. According to the office, exports in April saw a 7.5% year-on-year increase reaching US$19.9 billion, while its imports during the same saw a 17.6% increase reaching US$20.6 billion. The country’s largest top export earners were smartphones, garments and electronic home appliances, while its key imports were electronics, machinery and fabrics. Meanwhile, the Vietnamese Foreign Investment Agency reported that Vietnamese firms invested almost US$150 million in 23 foreign markets in the first quarter of the year — the top investment destinations were Spain (US$59.8 million), Cambodia (US$37.9 million) and Malaysia (US$14 million).
Read more>>