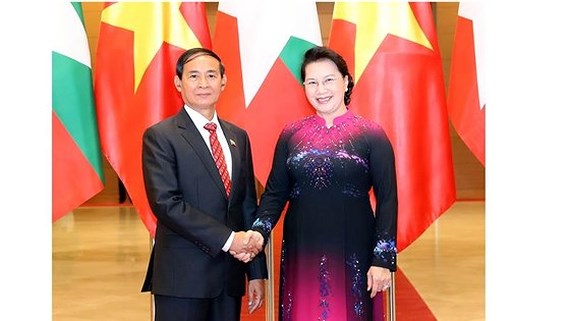 Vietnam and Myanmar strive to reach US$1 billion in trade turnover
(12 May 2019) Myanmar President Win Myint’s visit to Hanoi on May 11 concluded with leaders from both countries agreeing to aim for US$1 billion in bilateral trade turnover in the near future, up from the US$860 million turnover reached in 2018. To reach the target, Vietnamese Prime Minister Nguyen Xuan Phuc suggested increased cooperation in the agricultural and seafood industry, as well as in the development of land and maritime transport infrastructure. On the same day, Win Myint also met with Vietnamese parliamentary chair Nguyen Thi Kim Ngan, who expressed her country’s hope for continued support from Myanmar as Vietnam assumes the role of ASEAN Chair and President of the ASEAN Inter-Parliamentary Assembly (AIPA) in 2020.
Read more>>

EXIM Thailand plans to finance more investments into Myanmar
(10 May 2019) The Export-Import (EXIM) Bank of Thailand will soon offer more loans to Thai companies venturing into Myanmar as part of its plan to capitalise on what the bank sees as Myanmar’s inevitable economic boom, said EXIM Bank president Pisit Serewiwattana. According to him, the bank has loaned almost US$650 million for projects in Myanmar over the past two decades, primarily for infrastructure projects such as power plants, airports, roads and transmission lines. Moving forward, the bank intends to provide more loans to businesses engaged in bilateral trade, especially those that plan to use “a wide range of Thai products in their commercial operations in Myanmar.” He added that the opening of a representative office in Yangon in 2017 has so far led to business volumes increasing by over 30%.
Read more>>

Thailand invests US$3 billion in bid to become Mekong subregion transportation hub
(13 May 2019) Thai transport minister Arkhom Termpittayapaisith revealed to reporters on May 10 the government’s plan to position Thailand as a major transportation hub for the Greater Mekong Subregion (GMS). To that end, the Thai government has invested over US$3 billion to develop infrastructure in border provinces in order to create economic corridors that will allow the country to be a major transit country in the GMS. This includes investments in a US$2.6 billion double-track railway at the Chiang Khong border checkpoint in the northern Chiang Rai province and a US$43 million goods transport hub. Furthermore, the Thai government is building a bridge on its eastern border with Cambodia, a US$31 million bridge in the Nong Khai province bordering Laos, and a US$34 million bridge to link Mae Sot with Yangon in Myanmar.
Read more>>

Myanmar to get new international port container terminal in Yangon
(9 May 2019) The Myanmar Investment Commission (MIC) has approved the development of the new Ahlone International Port Terminal 2 (AIPT) in the Ahlone township on the Yangon River. The terminal will be developed by Adani Myanmar, which will also operate and maintain the 54-acre project and 630-metre jetty for the initial concession period of 50 years. The project will likely be developed in two phases, with a total cost of US$290 million. According to the Myanmar Port Authority, Yangon already has 12 port terminals, but the decision to build another terminal was made since port traffic has increased by almost 13% in the past four years, and the government expects this number to grow in the coming years. Myanmar’s overseas trade reached US$19.9 billion for the 2018-2019 fiscal year, an increase of US$700 million over the same period last year.
Read more>>

Rubber exports from Myanmar expected to rise on the back of improved production
(13 May 2019) Myanmar will likely export approximately 300,000 tonnes of rubber this year as output by local plantations continue to rise, according to the Myanmar Rubber Planters and Producers Association (MRPPA). The MRPPA’s forecast is slightly higher than the government’s, which stands at 260,000 tonnes. The association’s projections were made based on the rise in rubber exports in recent years and the local industry’s hope for Myanmar to become a major rubber exporter in time to come. The MRPPA said the country exported 140,000 tonnes of rubber in 2017, up 56% from 2016. Only 8% of locally-produced rubber is used for domestic consumption, and of the 92% exported, 70% is sold to China. According to the Myanmar Times, Thailand is presently the world’s leading rubber producer with an annual yield of 4.6 million tonnes, followed by Indonesia with 2.4 million tonnes, and Malaysia with 2.2 million tonnes.
Read more>>