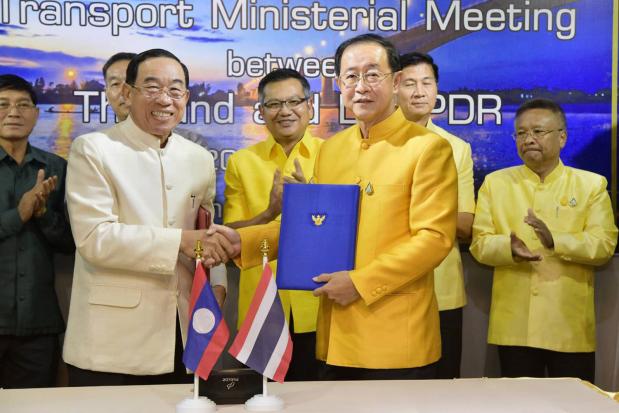 Thailand may build two more bridges linking with Laos worth US$125 million
(21 May 2019) Two more bridges over the Mekong river worth around US$125 million linking Thailand and Laos may be approved by the Thai cabinet in the near future, with one set to be approved as early as next week, said Thai transport minister Arkhom Termpittayapaisith. The minister was speaking at the Thai-Lao transport ministerial meeting in Nong Khai province in Thailand on May 20, which was also attended by Lao public works and transport minister Bounchanh Sinthavong. According to Termpittayapaisith, the bridges would be the 5th Thai-Lao Friendship Bridge connecting Thailand’s Bung Kan with Laos’ Borikhamsay, and the 6th Thai-Lao Friendship Bridge connecting Thailand’s Ubon Ratchathani with Laos’ Salavan. Other matters discussed during the meeting included repair works for the third and fourth Thai-Lao bridges (expected to be carried out in June), the second phase of the Thai-Lao rail link, as well as designs for the bridge connecting the Thailand-Laos-China rail lines.
Read more>>

Vietnamese, Lao provinces to enhance cooperation in investments and capacity-building
(21 May 2019) The governor of Laos’ Oudomxay province Khamphan Phoinhavong’s working visit to Vietnam’s northern Ha Nam province concluded with both sides agreeing to enhance cooperation. During his visit, Phoinhavong asked Ha Nam for investments and capacity building support, especially in farming and tourism development. The vice chair of the Ha Nam People’s Committee Truong Minh Hien, for his part, said that the Lao delegation’s visit will help deepen relations between both countries and provinces. According to Hien, Ha Nam province’s economy has recorded over 10% in annual growth in the past decade, with per capita income in 2018 crossing the US$2,500 mark. He attributed the province’s growth to its focus on developing its agricultural, manufacturing, trade and services, and medical industries.
Read more>>

Laos’ trade deficit falls in Q1 2019 to US$143 million
(21 May 2019) Laos’ recorded a US$143 million trade deficit in the first quarter of 2019, down from the US$374 million recorded during the same period last year. Figures from the Lao Ministry of Industry and Commerce show that the quarter’s total trade saw a 1.53% year-on-year decline reaching only US$2.32 billion, of which imports accounted for US$1.23 billion while exports accounted for US$1.09 billion. According to the Vientiane Times, the smaller trade deficit could be attributed to the rise in imported materials for infrastructure development, hydropower projects, and domestic production. The Lao government has committed to meeting its goal of US$11.29 billion in total trade this year, with exports worth US$5.52 billion and imports worth US$5.78 billion.
Read more>>

Myanmar aims to attract US$5.8 billion in FDI in 2019
(20 May 2019) Myanmar hopes to attract US$5.8 billion in foreign direct investment (FDI) this year and it has so far already received US$2.5 billion, according to Ministry of Investment permanent secretary Aung Naing Oo. According to the secretary, while some companies remain hesitant to invest in the country, the government remains confident that the Myanmar Investment Promotion Plan (MIPP) will be able to attract large investments, especially in labour-intensive industries. Their focus, he said, is on attracting investments that boost job creation, skills development and infrastructure development. Additionally, Myanmar also hopes to benefit from the shift in production investments to CLMV (Cambodia, Laos, Myanmar, Vietnam) markets due to the ongoing US-China trade war, while developing new industrial zones in areas bordering Thailand in order to create jobs for citizens in those areas.
Read more>>

Trade at Cambodia Securities Exchange reaches new high due to Sihanoukville Autonomous Port stocks
(21 May 2019) The Cambodia Securities Exchange (CSX) recorded its highest-ever trade volume on May 21, with almost 10 million shares worth over US$30 million traded. According to the CSX, most of the shares traded were Sihanoukville Autonomous Port stocks, which accounted for around US$29.7 million of the US$30 million traded. A senior CSX official said most of the buyers who contributed to the record-high trading volume were Japanese institutional investors. The CSX also noted that most of the shares were traded using the Negotiated Trading Method (NTM), a form of trading facilitated by a broker. The first CSX deal executed through NTM this year was the US$1.5 million trade of Phnom Penh Special Economic Zone shares in March.
Read more>>