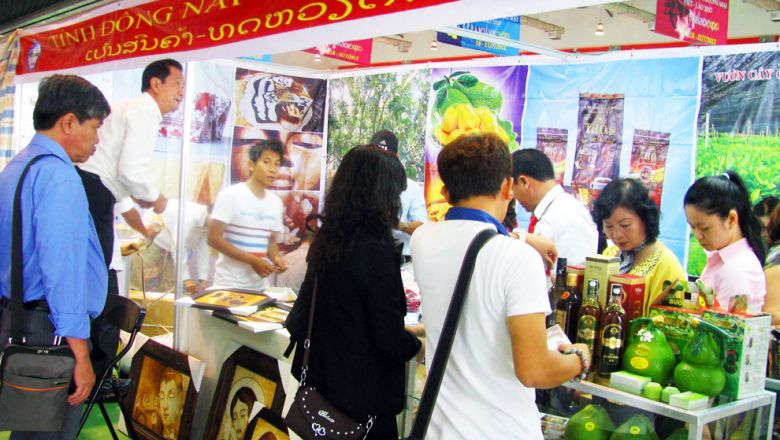 Laos aims to lower trade deficit with Vietnam to US$227 million in 2019
(24 May 2019) The Lao government hopes to lower its trade deficit with Vietnam to around US$227 million, down from last year’s US$496.2 million. According to Laos’ Ministry of Industry and Commerce, this year’s target can be achieved if it lowers its import volume to US$985.3 million from last year’s US$1.38 billion, and reaches exports of at least US$757.9 million compared with last year’s US$885.3 million. Laos primarily exports drinking water, minerals, wood products, agricultural products and cattle to Vietnam. It mainly imports petroleum, fertilisers, steel, machinery, electrical equipment, construction materials and spare parts. Furthermore, Vietnam has 409 investment projects in Laos, primarily in the areas of energy, mining, transportation, industrial tree plantations and services. The country’s investments in Laos in 2018 reportedly totalled US$4.1 billion.
Read more>>

Vietnam’s Vinamilk builds US$500 million organic milk farm in Laos
(28 May 2019) Vietnamese dairy company Vinamilk commenced construction on a US$500 million organic dairy cow farming complex in Laos’ Xiengkhouang province recently. The project, which is financed by Lao-Jagro Development Xiengkhouang Co (Lao-Jagro), will eventually span 20,000 to 25,000 hectares and house 124,000 dairy cows. Speaking at the opening ceremony, Xiengkhouang province chairman Bontone Chanthaphone said that the project will boost the local economy and improve farmers’ livelihoods. Vinamilk head Mai Kieu Lien, for his part, said that the project would leverage high-tech agriculture that could make the province the “milk capital” of Laos. Vinamilk is one of two of Vietnam’s dairy heavyweights, holding 59% of the domestic market share. The company also announced earlier this year that it has invested in its first factory in Myanmar to meet the growing demand for dairy products there.
Read more>>

Wood exports reach nearly US$3.12 billion in the first four months of 2019
(28 May 2019) Exports of wood and wood products saw a turnover of almost US$3.12 billion in the first four months of the year, the Vietnamese General Department of Customs said. According to the department, the sharp rise was fuelled by stronger demand from key markets such as the US, which saw a 34.6% rise in demand year-on-year during the period reaching US$1.42 billion. The department also foresees the wood and wooden product exports in the first half of 2019 to grow by 16% to 18% compared to the same period last year. According to the Handicraft and Wood Industry Association, Vietnam generated US$9.4 billion in revenue from wood and wooden products last year, accounting for over 23% of the agriculture sector’s total export turnover. Furthermore, the local wood processing sector also recorded a trade surplus of over US$7 billion.
Read more>>

Foreign trade crosses US$21 billion in first seven months of 2018-19 fiscal year
(23 May 2019) Myanmar recorded US$21.2 billion in trade with foreign countries in the first seven months of the 2018-2019 fiscal year, according to latest figures from its Commerce Ministry. Of the sum, US$10.15 billion were from exports and US$11.05 billion were from imports. The report further stipulates that US$14.8 billion were generated through maritime trade, while US$6.3 billion was generated through border trade. Meanwhile, the Directorate of Investment and Company Administration (DICA) announced that the country recorded US$2.41 billion in new investments during the period. Furthermore, the Myanmar Investment Commission (MIC) has so far approved 150 foreign projects in the current fiscal year. The investments primarily went to the transport and communication sector (US$1.16 billion) and manufacturing sector (US$668.3 million).
Read more>>

Digital economy minister hopes for policy continuity
(28 May 2019) Thai digital economy and society minister Pichet Durongkaveroj expressed his hope that his successor in the new government will continue implementing the government’s digital economy development roadmap that was rolled out in 2016. According to the minister, the five key areas under the roadmap are the development of digital laws, digital government, cybersecurity, technology innovation and digital talent development. This includes the development of infrastructure projects such as the Digital Park in the Eastern Economic Corridor’s Chon Buri province that aims to develop “S-curve” industries such as robotics, aviation, digital enterprise, biofuels and biochemicals. Furthermore, the ministry also hopes to create 10,000 startups in the country by 2037, of which the majority should involve new connectivity technologies such as the Internet of Things. Pichet also highlighted the Net Pracharat project which aims to provide all villages with broadband access so that they can sell their products through online marketplaces. According to him, the project will be completed by November this year.
Read more>>