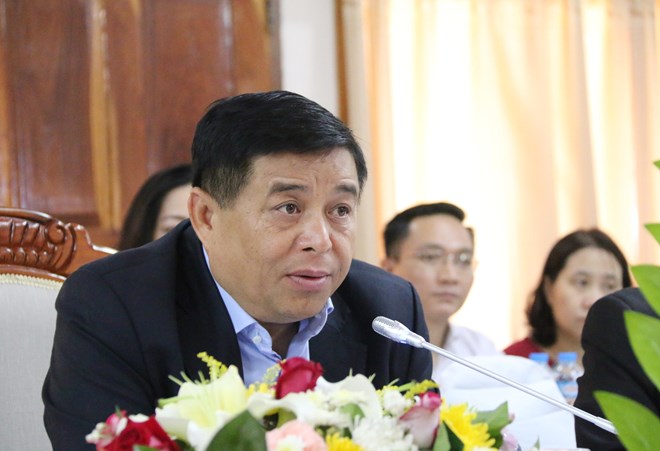 Laos, Vietnam investment ministries to enhance cooperation
(22 June 2019) Vietnamese planning and investment minister Nguyen Chi Dung’s working visit to Laos concluded with the signing of a bilateral cooperation agreement for the 2019-2021 period with his Lao counterpart Suphan Keomixay on June 22. Under the agreement, both ministries will work closely to help facilitate the investment environment, boost bilateral enterprise connectivity, and diversify trade activities in order to meet the targeted bilateral trade growth rate of 10-15% per year. Both sides also agreed to push for speedier investment progress, especially for projects related to transport connectivity. During his trip, the Vietnamese minister also met Lao Prime Minister Thongloun Sisoulith on June 21, during which the premier reaffirmed the country’s commitment in ensuring favourable conditions for Vietnamese investors, especially in the tourism and organic agriculture sectors.
Read more>>

Prime Ministers meet in Bangkok on the sidelines of the ASEAN Summit
(23 June 2019) Vietnamese Prime Minister Nguyen Xuan Phuc, Lao Prime Minister Thongloun Sisoulith and Cambodian Prime Minister Hun Sen’s working session held on the sidelines of the 34th ASEAN Summit in Bangkok on June 23 concluded with the three leaders noting the progress made by each country in developing their economy and their efforts to “reform and integrate into the world.” According to Vietnamese media, the three premiers also agreed to enhance cooperation both through the Cambodia-Laos-Vietnam (CLV) Development Triangle Area and as part of the Mekong subregion, with plans to “soon build a blueprint for connecting the three economies.” Furthermore, Prime Minister Nguyen Xuan Phuc reaffirmed Vietnam’s commitment in helping Laos and Cambodia’s socio-economic and human capital development. The Lao and Cambodian premiers, for their part, congratulated Vietnam on being named a non-permanent member of the United Nations Security Council 2020-2021, and pledged to support Vietnam when it serves as ASEAN Chair next year.
Read more>>

Myanmar, Vietnam to deepen investment and trade ties
(20 June 2019) Vietnamese Deputy Prime Minister Vuong Dinh Hue led a working visit to Myanmar on June 16-17 where he met several senior government officials in Nay Pyi Taw to discuss enhancing bilateral trade and investment ties. DPM Hue expressed his hope for more trade and investment between the countries, particularly through the Bank for Investment and Development of Vietnam (BIDV). According to BIDV chair Phan Duc Tu, BIDV has US$130 million in assets with US$46.5 million in mobilised capital and US$20 million in loans in Myanmar as at the end of May 2019. The bank, which first opened a representative office in April 2010, has partnerships with three major local banks and hopes for longer economic ties between both countries. Trade between Myanmar and Vietnam totalled US$860 million last year. Vietnam is also Myanmar’s seventh largest investor, with over 200 projects worth US$2.2 billion.
Read more>>

Vietnamese PM invites Thai investors to invest in high-tech and environmentally-friendly fields
(23 June 2019) Vietnamese Prime Minister Nguyen Xuan Phuc hosted a reception for Thai investors on June 23 on the sidelines of the 34th ASEAN Summit, during which he invited the Thai companies present to increase their investments in Vietnam. However, he stressed that Vietnam will not accept foreign direct investments blindly, but will seek to ensure that projects are “high-tech, environmentally-friendly and energy-saving.” To this end, he said that the government will also work to ensure that Thai investors are provided the best conditions to do business in Vietnam. In response to the Prime Minister’s remarks, Thai beverage company ThaiBev said that it will consider the Vietnamese government’s suggestion to invest in related fields such as waste and plastic treatment, while Amata Group expressed their interest in the development of smart cities, and Siam Cement Group said that they will consider investing in high-technology sectors.
Read more>>

Laos, Vietnam Deputy Prime Ministers agree to promote sustainable bilateral cooperation
(24 June 2019) Vietnamese Deputy Prime Minister (DPM) Trinh Dinh Dung’s working visit to Laos on June 24-25 concluded with both sides agreeing to continue enhancing cooperation between the countries, particularly in the areas of trade and defence. During a meeting with his Lao counterpart Sonexay Siphandone, DPM Dung expressed his wish for more favourable conditions for Vietnamese enterprises looking to invest in Laos, especially in border zones. DPM Sonexay Siphandone, for his part, said that he hoped that a bilateral agreement on the development of border trade infrastructure can be signed this year, alongside the review and adjustments of their existing bilateral trade and border trade agreements which were signed in 2015. Trade between Laos and Vietnam saw a 13.4% year-on-year increase in the first five months of 2019, reaching US$493 million. Vietnam also remains Laos’ third largest investor with 410 projects worth US$4.22 billion at present.
Read more>>