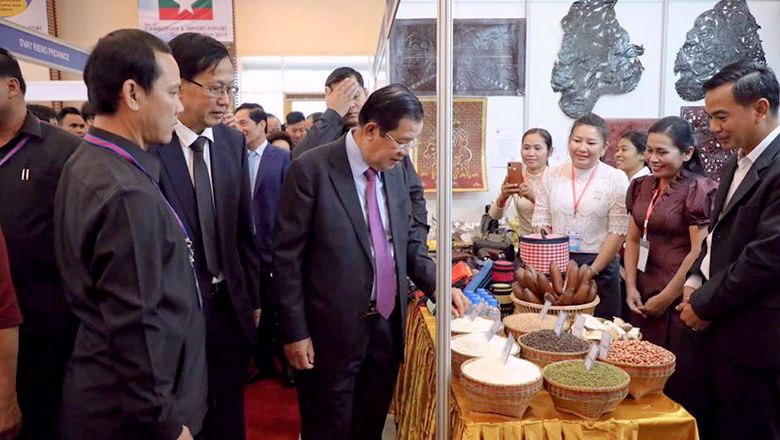 Cambodia-Vietnam trade likely to have exceeded US$5 billion mark
(15 December 2019) Trade between Cambodia and Vietnam may have already exceeded US$5 billion, said Cambodian Prime Minister Hun Sen. He believes the trade volume, targeted for 2020, may have already been reached due to trade figures not reflected in official data. According to him, exports of goods such as rice and farm produce along the border are not registered on the trade list. On another note, Vietnam invested in 206 projects in Cambodia last year worth a total of US$3.02 billion. Vietnam’s investment in Cambodia is largely concentrated in agriculture and forestry, accounting for nearly 70.0% of total registered capital while investment in finance, banking and insurance accounted for 9.4%.
Read more>>

Cambodia responds to the EU over human rights concern
(12 December 2019) The Cambodian government said last week that it has responded to the European Union’s (EU) threat to suspend its Everything But Arms (EBA) trade privileges with a “comprehensive report on the actions and measures undertaken by the Royal Government to respond to all the areas of concerns” and that they expect the EU to take into consideration the potential impact that the EBA withdrawal would have “on nearly one million female workers” and their families, as well as the “principles of sovereignty and non-interference into Cambodia’s internal affairs.”
Read more>>

Laos to work with US on improving its business environment
(16 December 2019) Laos’ Ministry of Industry and Commerce announced that they will cooperate with the US Agency for International Development (USAID) to implement a five-year “New Lao Business Environment Project” that aims to improve the country’s business environment through capacity building and advisory services. This would include improving the country’s trade-related laws, policies and regulations, in addition to boosting the competitiveness of Laos’ small and medium enterprises. According to US ambassador to Laos Rena Bitter, the US has invested US$22 million in recent years to help boost the Lao economy.
Read more>>

Taco Bell keen to expand in the Mekong region
(12 December 2019) Siam Taco, the Thai franchisee of American fast-food chain Taco Bell, is in talks with the US franchiser to acquire the rights to expand the chain to Cambodia, Laos, Myanmar and Vietnam. The company, which received the right to launch the first Taco Bell restaurant in Thailand in 2018, opened its first branch in Thailand in January 2019 and currently has four branches in Bangkok and one in Nonthaburi. Taco Bell currently has stores in 11 countries in the Asia Pacific region, including Thailand and the Philippines. New restaurants are scheduled to open in Indonesia and Malaysia in 2020.
Read more>>