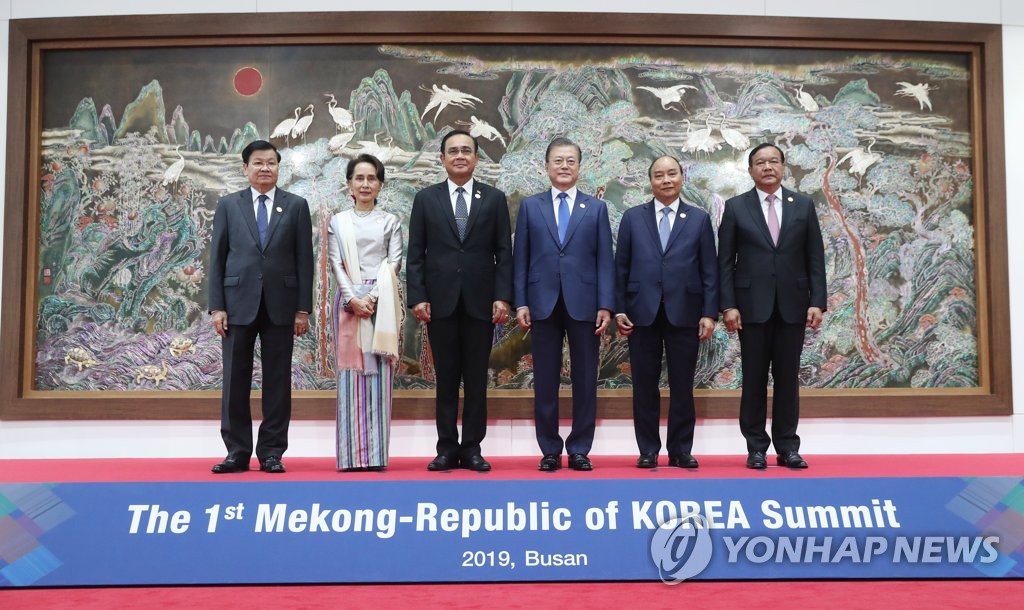 South Korea, Mekong nations to prioritise seven cooperation sectors
(27 November 2019) The inaugural Mekong-Republic of Korea Summit held in Seoul concluded with the leaders of South Korea and the five Mekong countries agreeing to push for greater cooperation in seven key sectors as outlined in the new Mekong-Han River Declaration. This would include the creation of new biodiversity conservation and water resources research hubs, as well as the joint development of e-government and smart city projects. According to South Korean President Moon Jae-in, the country’s trade with Mekong nations grew 2.4 times in the past eight years, totalling US$84.5 billion in 2018.
Read more>>

Mekong countries approve new 5-year plan to manage drought
(27 November 2019) The Mekong River Commission (MRC) Council approved a five-year strategy to tackle the upcoming dry season as water levels in the subregion drop to their lowest points in the last 60 years. According to MRC data, Cambodia and Thailand will likely be the hardest hit among countries in the lower Mekong basin, which also include Laos and Vietnam. The new five-year strategy aims to tackle priority areas that require “immediate action” such as improving the governments’ capacity to monitor, forecast, mitigate, provide early warning and share information.
Read more>>

Thailand’s EGAT begins work on coal-fired power plant in Vietnam
(24 November 2019) The Electricity Generating Authority of Thailand (EGAT) broke ground on a 1,320 MW coal-fired thermal power plant in the central Vietnamese province of Quang Tri last week. The project, which the EGAT is developing under a build-operate-transfer contract, will have two 66 MW turbines that is expected to ultimately generate 7,200 kWh of electricity and over US$538 million in revenue annually. The Quang Tri Economic Zone Management also inaugurated a new US$30.2 million, 23.5-kilometre road connecting Quang Tri Southeastern Industrial Park with Cua Viet Port during the power plant’s ground-breaking ceremony.
Read more>>

Cambodia continues to attract Vietnamese investment
(21 November 2019) Cambodia remains one of Vietnam’s top investment destinations with Vietnamese firms having invested around US$50 million in the country in the first nine months of 2019. According to the Vietnamese investment ministry, this makes Cambodia the country’s fourth-largest destination of Vietnamese outbound investment during the period. Furthermore, there are over 200 Vietnamese companies operating in Cambodia, making Vietnam the country’s fifth-largest foreign investor. Bilateral trade totalled US$2.7 billion in the first half of 2019 and is expected to reach US$5 billion by year-end.
Read more>>

Cambodia approves US$8.2 billion national budget for 2020
(27 November 2019) Cambodia’s legislative arm passed the country’s draft Budget Law for 2020 which provides a 22% increase year-on-year in expenditure for next year totalling US$8.2 billion. More specifically, the US$4.8 billion will go to current expenditures and US$3.3 billion will be allocated for capital expenditures. To this end, the government expects to generate US$6.5 billion in revenue to cover its expenses and borrow the rest from development partners, though finance minister Aun Pornmoniroth stressed that the government will not borrow more than US$1.9 billion next year.
Read more>>