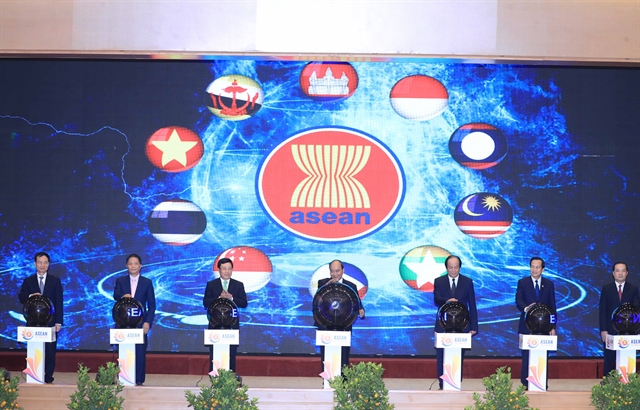 Vietnamese Prime Minister launches Vietnam’s 2020 ASEAN Chairmanship
(7 January 2020) Vietnamese Prime Minister Nguyễn Xuân Phúc chaired a ceremony in Hanoi on 6 January launching Vietnam’s 2020 ASEAN Chairmanship. The Prime Minister stated that Vietnam intends to build upon the achievements and efforts of previous ASEAN chairs and work to identify the future direction of the ASEAN Community until 2025 and beyond. The ASEAN 2020 theme of ‘Cohesive and Responsive’ will be centered on five priorities: strengthening ASEAN unity and regional centrality, intensifying economic integration, promoting the ASEAN identity, enhancing ASEAN’s global partnership for peace and stability, and developing the bloc’s institutional capacity and effectiveness.
Read more>>

Cambodia benefitted from US-China trade war, claims National Bank of Cambodia
(7 January 2020) The National Bank of Cambodia has claimed in its latest report that Cambodia benefited from the trade war through the relocation of production from China to the country to avoid US tariffs. A think tank quoted stated that while Cambodia may benefit from Chinese investors seeking to relocate their production base, in the long term the country will experience negative impact due to China possibly reducing investment if a global economic crisis occurs. However, neighbouring countries such as Vietnam and Thailand have absorbed more investments from relocating companies due to superior capacity and infrastructure.
Read more>>

195 MW of electricity from Laos dam linked to Cambodia’s national grid
(8 January 2020) Nearly 200 MW of electricity from the Dan Sahong Dam in Laos was linked to Cambodia’s national grid on 7 January after tests on the dam’s four electricity generators were completed. The power linkage between interim transmitters in Laos and transmitters in Cambodia’s Stung Treng province was carried out in preparation for the official importing of power from Laos to Cambodia in the first quarter of 2020. The US$500 million dam has an installed capacity of 260 MW. Cambodia and Laos had also reached an agreement for a 2,400MW power purchase scheduled to start in 2024.
Read more>>

Myanmar economy expected to remain flat at 6.5% growth in fiscal year 2019/2020
(8 January 2020) A British research firm projected in a recent report that Myanmar’s economy will remain flat at 6.5% growth in the fiscal year 2019/2020. The growth forecast was reportedly the lowest yet among other projections: the ASEAN+3 Macroeconomic Research Office forecasted 7.1% while the World Bank projected a 6.6% growth. Among the reasons attributed to the flat growth was poor access to credit for the country’s SMEs (which account for a third of the contribution to Myanmar’s GDP), and the poor business environment that deters foreign direct investment. High projected inflation of 6.5% in the fiscal year and uncertainty caused by an upcoming general election will also curtail growth. Nevertheless, sectors which are expected to grow include manufacturing, trade, transportation, and tourism.
Read more>>