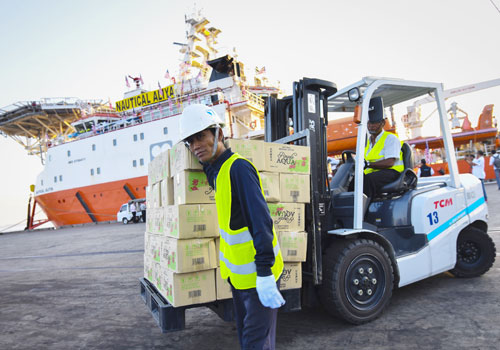 Government targets US$29 in trade in the next year
(13 July 2017) The Myanmar government aims to achieve trade worth US$29 billion with US$14 billion from exports and US$15 billion from imports in the 2017-2018 period. According to the Myanmar Assistant Secretary of the Ministry of Commerce U Khin Maung Lwin, the country has room to broaden exports in fisheries and the garment industry. However, there are doubts on the nation’s ability to achieve its target as the total trade volume since June only totaled up to US$7.78 billion with US$3.16 from exports. There has also been a decline in the number of containers at ports as well as the export of consumer products such as sugar and corn.
Read More >

Myanmar and Japan collaborate to increase quality of rice
(19 July 2017) Myanmar and Japan will work together to produce quality rice seeds for Myanmar. Currently, Myanmar exports between 1.5 million and 2 million tonnes of rice, according to the Myanmar Rice Federation, and it aims to export 2 million tonnes in the 2017-2018 period. Myanmar’s rice exports have declined due to inadequate quality, poor agricultural infrastructure and a lack of research. Myanmar’s Deputy Permanent Secretary of Ministry of Agriculture, Livestock and Irrigation U Myo Tint Tun said the project in collaboration with the Japan International Cooperation Agency (JICA) will begin implementation at the ministry-owned quality seed gardens. The project includes upgrading existing seed gardens and constructing Japanese technology laboratories to test the quality of rice.
Read More >

India approves US$252 million for upgrade of highway to link with Myanmar
(13 July 2017) The Indian cabinet approved a multi-million dollar upgrade to a highway that links Manipur state in India to Myanmar. The project will cost approximately US$252 million and according to India’s Road Transport and Highway Minister Mr Nitin Gadkari, the upgraded highway will reduce travel time from three-and-a-half hours to one-hour and 45 minutes. The project is of international importance to India as it will boost international trade and business, security as well as contributing to the development of the country’s northeast region.
Read More >

Sri Lanka offers to purchase rice from Myanmar
(18 July 2017) Sri Lanka wants to purchase 500,000 tonnes of rice from Myanmar via a government-to-government contract, according to Director General of Myanmar Trade Promotion Team under the Ministry of Commerce U Aung Soe. The negotiation of the contract is currently led by Sri Lankan Ambassador Mr K.W.N.D. Karunaratne and current discussions are centred on price of rice per tonne. Under the new National League for Democracy-led government, trade between the two countries has increased to US$24.5 million. In the first two months of the current fiscal year, trade between the countries stands at US$5.3 million.
Read More >

India and Myanmar further strengthen military ties
(18 July 2017) India wants to strengthen military cooperation with Myanmar. This was expressed by Indian Prime Minister Narenda Modi to Myanmar Chief General Min Aung Hlaing during the latter’s visit to New Delhi. Myanmar is seen as important for India to build relations with other East Asian neighbours. Modi said that India would improve military ties between the countries, by supplying arms, conducting joint exercises to upgrade defence, and through diplomatic and economic relations. India has consistently increased its defence cooperation with Myanmar and the two parties have also recently concluded a US$37.9 million deal for India to provide lightweight torpedoes to Myanmar.
Read More >