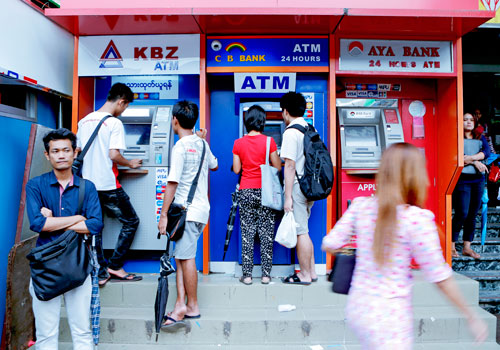 Myanmar moving towards interbank lending
(26 July 2017) Myanmar is moving towards interbank lending as its first repurchase agreement (repo) transaction of nearly US$400,000 was successfully made through the Central Bank of Myanmar’s new clearing and settlement system. This is a significant milestone in Myanmar’s financial sector where liquidity is insufficient and business are often cash strapped. According to Rajesh Ahuja CEO of ANZ bank in Myanmar the interbank market will also provide a balance between demand and supply of currency as it allows one bank to lend to another so funds can be extended to more businesses and channelled into the economy.
Read More >

Myanmar to put out tender to upgrade three domestic airports
(20 July 2017) The Myanmar Department of Civil Aviation (DCA) will issue a tender calling for developers to upgrade three domestic airports; Kawthaung airport in Tanintharyi Region, Mawlamyine airport in Mon State and Heho airport in Shan State, via public-private partnerships (PPPs). According to the Deputy Director of DCA U Ye Htut Aung, the government aims to transform two of the the airports into major domestic airports and one into an international airport to boost regional tourism. Based on Ministry of Hotels and Tourism statistics, more than 130,000 tourists landed at Kawthaung and over 140,800 in the entire region.
Read More >

World Bank provides US$100 million in assistance to control flooding in Yangon
(24 July 2017) Myanmar received US$100 million in aid from The World Bank to control Yangon’s floods. The city’s drainage system has become less efficient due to an increasing population and rainfall. Yangon Region Minister U Phyo Min Thein said the government will systematically utilise the money to repair drains and pavements as well as study new city projects to reduce the city’s population. He added that the Yangon Region tax increased to approximately US$147 million in the last fiscal year to help efforts to reduce floods in the area.
Read More >

Myanmar permits livestock export
(24 July 2017) Myanmar government lifted the ban on exporting livestock products and began to provide loans to farmers via the Myanmar’s Agricultural Development Bank to boost the country’s agriculture and animal husbandry industries. The Minister of Planning and Finance U Kaw Win said the government is currently preparing to support whole supply chains for the agricultural sector and will create designated agricultural trading zones in all regions of the country. He added that the permission to export livestock will be given after reporting to the National League of Democracy’s Economic Committee.
Read More >

‘Mini grids’ to provide electricity to rural Myanmar
(24 July 2017) The concept of “mini grids” is gaining traction in providing electricity to small villages in far reaching parts of Myanmar. While the government has erected poles in the villages electricity has yet to be supplied through them. Based on the 2014 census, only 32% of the households use electricity from the grid as a source of lighting. The project involves a joint venture between Yoma Strategic Holdings and a Norwegian government fund in which small power stations are built and will produce electricity through solar panels and diesel generators. It will begin trial operations in ten locations in 2017 and each site will supply electricity to nearby villages of 100 to 200 households.