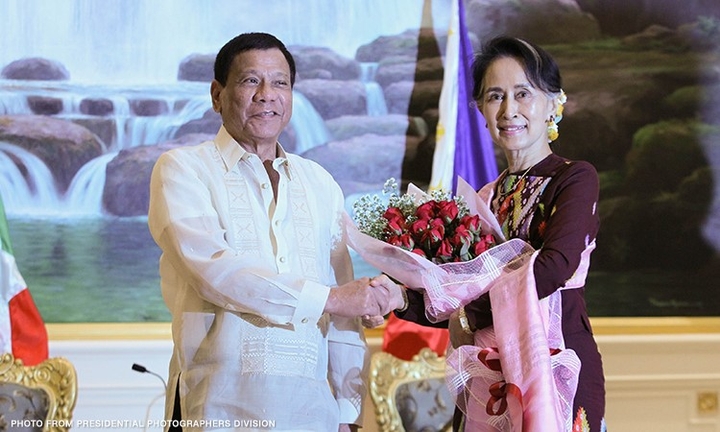 Philippines pledges US$300,000 for Rakhine State
Philippines President Rodrigo Duterte, on an official visit to Myanmar this week, met with President U Htin Kyaw and State Counsellor Aung San Suu Kyi at the Presidential Palace at Naypyidaw. During his visit Duterte also witnessed the signing of a memorandum of understanding on food security and agricultural cooperation. The memorandum was signed between the Philippines’ Department of Agriculture and Myanmar’s Ministry of Agriculture, Livestock and Irrigation. Duterte also pledged US$300,000 to Suu Kyi for humanitarian assistance to Myanmar’s Rakhine State. This is the biggest donation made by an ASEAN member this year.
Read More >

Myanmar struggles to keep foreign investors satisfied
While the World Bank projects Myanmar’s growth rate to be at 7 percent this year the country continues to struggle to keep its foreign investors satisfied. The World Bank pointed out in January this year that there is a lack of clarity in the government’s communication of economic policies. Furthermore many believe that the coalition government lacks a coherent economic strategy and regulatory framework that foreign investors look for. Some of the other problems currently faced by companies operating in the country are poor logistics such as lack of paved roads.
Read More >

Australian company pulls out of Myanmar
An Australian mining company, Eumeralla Resources, is set to divest from its operations in Myanmar citing “the relative lack of success in commercial development” in the country. The company had initially invested in Myanmar in July 2013, applying for a licence to explore tin and tungsten on a site in Kayah State, through its 70 percent stake in Mawsaki Mining Company. In October 2014 their licence had been approved state government approval for the permit, but it was still awaiting Union level permission.
Read More >

Myanmar praises China for blocking rebels bank account
The Myanmar government praised China for suspending a bank account being used by rebels who are fighting with the Myanmar military. Reuters revealed that the group was openly soliciting funds via China’s state-owned bank Agricultural Bank Of China (AgBank). The Chinese authorities suspended the account however there is no evidence that AgBank or other financial entities which handled transactions for the Myanmar National Democratic Alliance Army have broken Chinese law. According to experts a weakness in controls is what led to the rebels being able to maintain the account.
Read More >

China and Russia block statement on Myanmar;
China with the backing of Russia, stopped a short United Nations Security Council statement on Myanmar after the 15-member body met to discuss the situation in the Rakhine State. The meeting was called by Britain to discuss the Myanmar military’s security operations in the state and members were briefed by U.N. political affairs chief Jeffrey Feltman. The press statement, which was seen by Reuters, was to express concern over renewed fighting in the area and stress the importance of humanitarian access to all in the affected areas.
Read More >

EU calls for an international probe into accusations of abuse of Rohingya
In new developments the European Union has called for an international fact-finding mission to urgently investigate the situation in Rakhine state in Myanmar. There have been allegations of torture, rape and executions perpetrated by the Myanmar military against the Rohingya Muslim minority. The revised draft resolution was submitted to the U.N. Human Rights Council. The 47-member forum, is currently holding a four-week session and will vote on the resolution between 23-24 March.
Read More >