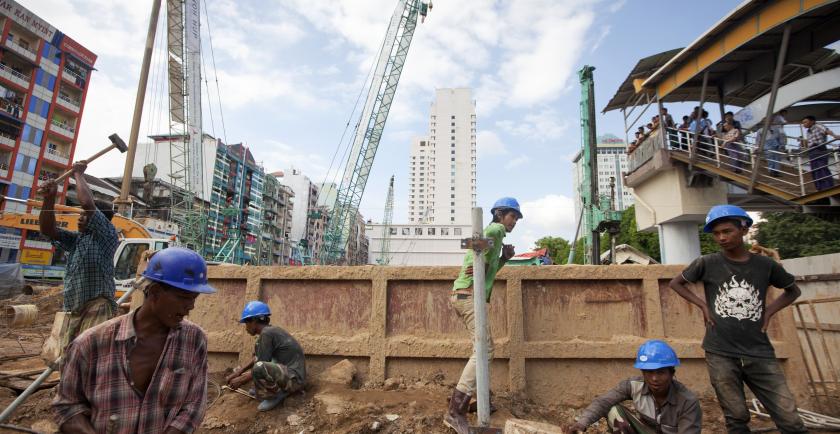 Withholding taxes to be removed by Myanmar government in April
(13 February 2018) All forms of withholding taxes will be removed starting 1 April 2018. Goods, services and leases procured currently are levied 2 percent of withholding tax, while a 10 percent withholding tax is levied on royalties paid. This measure was done in response to the complaints made by the local businesses, who said it was an unnecessary burden on cash flows and profits.
Read More >

Local banks struggling to cope with new banking regulations
(12 February 2018) Local banks in Myanmar are struggling to follow the new regulations set by the Central Bank of Myanmar (CBM). One of the new regulated rules that local banks find tough to adapt is to convert all overdraft loans to term loans within a given deadline of six months. Senior advisor at Kanbawza Bank and former CBM Vice governor said the regulations imposed by CBM are meant to align the Myanmar financial sector with the international banking industry. The new regulations were set in July 2017 to modernise the domestic financial sector and better attract foreign direct investment at a time of slower economic growth in the country.
Read More >

Myanmar to introduce its goods in the international market
(13 February 2018) Myanmar aims to enter the international market by holding an exhibition of its goods at the upcoming 123rd Spring Canton Fair of China. The government has encouraged its local entrepreneurs and traders to attend and participate in the exhibition. Director General of the Trading Department of the Myanmar Ministry of Commerce, U Yan Naing Tun said that the participation in the trade fair will not only prevent illegal trading but will also promote the country’s trading sector. Based on the statistic given by the Myanmar Ministry of Commerce, in the last fiscal year of 2016-17, bilateral trade between Myanmar and China recorded about US$10.7 billion.
Read More >

Myanmar’s citizen investment reached US$750 million
(10 February 2018) Myanmar citizens have made a total investment of over US$750 million (3.372 trillion kyats) up to February this year. On February 2nd, the Commission of the Directorate of Investment and Company Administration in Yangon, Myanmar had approved three citizen investments and one business. According to Myanmar Investment Commission (MIC), total foreign investments have reached US$5.4 billion (7.19 trillion kyats) as of the first week of February this fiscal year.
Read More >

Yangon Port calls for foreign investments to improve jetty
(11 February 2018) Myanmar Yangon port, which now handles 90 percent of sea-based goods transportation, is seeking for foreign investments to upgrade their jetties. The jetties are mainly used for handling domestic cargo to international-standard ports. Myanmar Deputy General Manager of the Ministry of Transport and Telecommunications Dr. Myo Nyein Aye said the new upgrade on the jetties will create an inflow of additional investments once it becomes an international port.
Read More >