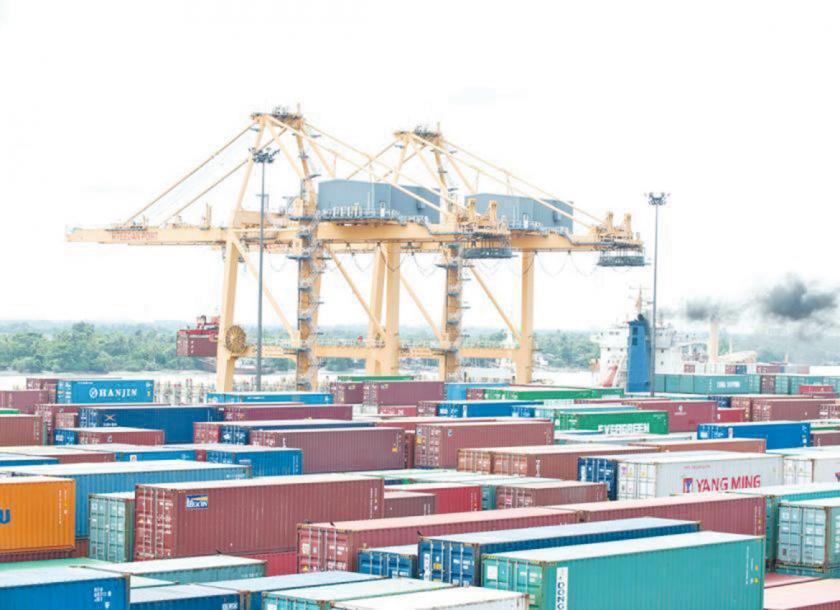 Myanmar government to come up with new National Logistic Master Plan
(26 March 2018) Myanmar’s Ministry of Transport and Communications, with the assistance from Japan International Cooperation Agency (JICA), is drafting a National Logistics Master Plan to enhance the current National Transport Master Plan. The new plan aims to create efficiency and competitive logistics system that supports multimodal transportation in the country, which targets to attract more foreign direct investments and enhance the industrial development in Myanmar. According to JICA, under the new logistic plan, a total of 167 projects have been included, of which 108 projects have been identified under the previous transport plan with the addition of 59 new logistics projects.
Read More >

India and Myanmar to explore partnership in business and investment
(22 March 2018) Vikram Misri, Indian Ambassador to Myanmar, during an introductory remark at the second edition of Myanmar-India Business Conclave that was held on 22 March in Yangon, said that it is now the right time for Indians to invest in Myanmar. Mr. Misri added that it is currently an opportune time as Myanmar at the time being is in a political and economic transition phase, therefore providing opportunities for the private sector to explore potential partnerships with local businesses in Myanmar. In addition, with the formation of India-Myanmar Chamber of Commerce, cooperation and communication for business communities of both countries will be enhanced, simultaneously improving the interaction between Myanmar and India. Union of Myanmar Federation of Chambers of Commerce and Industry (UMFCCI) also stressed that it is important for India to take part in the transformation of Myanmar given the country’s strategic position as an entry for India to ASEAN and GMS region.
Read More >

Myanmar FDI flow for the 2017-18 financial year exceeds target
(24 March 2018) Myanmar’s foreign direct investment (FDI) reached its expected targeted value of over US$6.11 billion a week before its targeted date for 2017 -2018 financial year that ends on 31 March 2018 with manufacturing, real estate, and services sectors coming in as the top three major investment areas in the country. Meanwhile, Myanmar Investment Commission (MIC) is expecting US$3 billion in foreign direct investments (FDI) for the six-month interim period between April 1 and September 30. In comparison, Myanmar’s total FDI value during the 2016-2017 financial year was US$ 6.64 billion. Singapore and China were the two largest investors in Myanmar, representing more than 60 percent of the total approved FDI into Myanmar during the 2017-2018 financial year, with both countries contributing US$2.1 billion and US$1.3 billion respectively. A year ago, Myanmar enacted a new Investment Law to attract more investment, stimulate the job market, and to improve the Myanmar economy.
Read More >

Top companies find doing business in Myanmar is still challenging
(26 March 2018) According to a study that has been released by Myanmar Center for Responsible Business (MCRB), Myanmar’s top companies find that doing business in Myanmar is still very challenging, citing family-run firms, lack of transparency and underground business as some of the few crucial factors that contributed to the sentiment. The study ranked 182 public, private and listed Myanmar companies based on factors such as auditing practices and ethics. The study pinpointed that cronyism and corruption in addition to a legacy of 50 years military rule, will continue to loom and hinder economic development in Myanmar, particularly in jade and mining industries.
Read More >

Foreign partnerships to boost transparency of Myanmar companies
(28 March 2018) Yangon-based Myanmar Centre for Responsible Business (MCRB) has launched the fourth Pwint Thit Sa report on Transparency in Myanmar Enterprises which assesses information disclosure on the corporate websites of 182 large domestic companies. The 2018 scoring on the report was done based on the ASEAN Corporate Governance Scorecard which was created by the ASEAN Capital Markets Forum (ACMF) and launched in 2011 as one of the initiatives in preparation for the ASEAN economic integration in 2015. According to the assessment, many of the companies in Myanmar still yet to have corporate websites. Even when the companies do have corporate websites, the transparency of corporate information still does not meet any criteria that are covered in the survey such as the companies’ biannual, annual, and financial reports, which should be released in accordance to the Companies Act.
Read More >