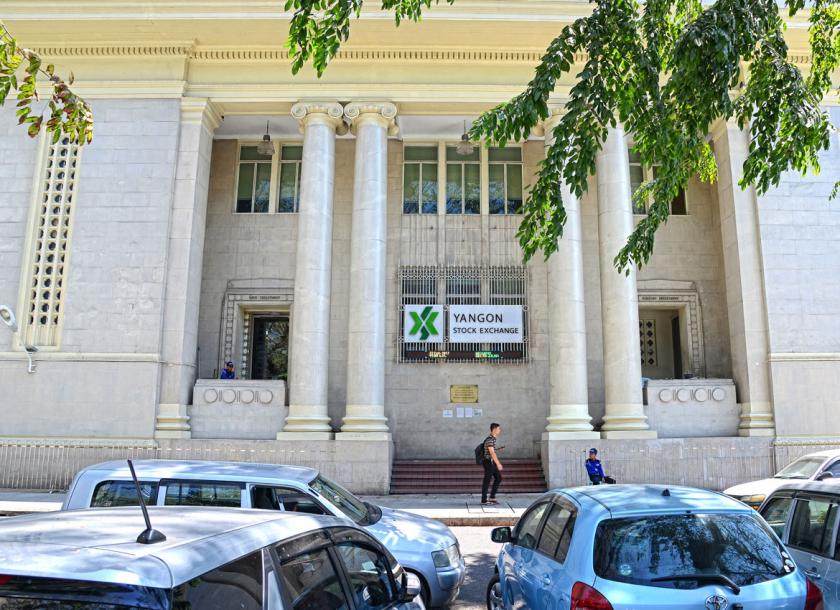 Myanmar to promote its local stock exchange to Japanese investors
(29 March 2018) The Government of Myanmar intends to attract investors from Japan by promoting its local stock exchanges in Tokyo before the country enforces a new law on foreign ownership by local firms. In order to provide more active foreign investment into Myanmar businesses, the new Myanmar Companies Law exempts foreign firms from various regulations unless they hold a stake of over 35 percent in local companies. U Maung Maung Win, Chair of Myanmar Securities and Exchange Commission cum Myanmar Deputy Minister of the Planning and Finance Ministry said Myanmar authorities target to vitalise the struggling bourse by increasing trade-matching sessions from the current two times to four times daily. In December 2015, with a capital investment of US$24 million (K32 billion), the first modern stock exchange in the emerging economy was established with Myanmar Economic Bank holding a 51 percent interest, Daiwa Securities 30.25 percent and Japan Exchange Group 18.75 percent.
Read More >

IMF embraces Myanmar’s economic recovery but cautions on downside risk
(29 March 2018) The International Monetary Fund (IMF) released the findings of its Article IV consultation with Myanmar, in which it welcomes the country’s economic recovery but warns about downside risks. Among the risks identified by IMF are the need for Myanmar’s banking sector to adjust to important new prudential regulations after a period of rapid credit growth, the humanitarian crisis in Rakhine state, commodity prices, potentially volatile global financial markets, exposure to spillovers from China, and the risk of natural disasters. In addition to expressing IMF’s strong concern, the findings also highlighted that in order to improve conditions in affected areas and to realize Myanmar’s strong potential for inclusive growth, there is a need for early and tangible progress toward peace and regional inclusion. Nevertheless, IMF said the medium-term macroeconomic outlook in Myanmar remains good with growth projection coming in at 6.7 percent in 2017/2018, predominantly due to recovering agriculture sector and exports.
Read More >

Myanmar’s lack of reform turns investors away
(30 March 2018) Two years after Myanmar leader Aung San Suu Kyi took office, the enthusiasm that greeted Myanmar’s transition to democratic rule and positive prospect for the country’s economy seems to gradually decline as much work still need to be done on the economic front. According to Myanmar Investment Commission, the approved volume of foreign direct investment between April 2017 and February stood at US$5.3 billion, but the figure for the 12 months through March 2018 is projected to be smaller than the previous year’s US$6.6 billion, a second consecutive year of decline. Adding to that, Colliers International, a real estate information company said that with foreign companies losing interest, office rent in Yangon is falling down with average monthly rent per square meter of floor space valued at US$44 in 2017, a drop of 31 percent since 2013.
Read More >

Business leaders question Myanmar government’s role in “new city” development project
(2 April 2018) Yangon’s government has formed a company to develop a landmass twice the size of Singapore as a re-launch of the “new city” development project abandoned in 2017. The development for New Yangon City will be primarily based on a Public-Private Partnership model, with businesses contributing to equity investments. On March 31, the regional government launched the New Yangon Development Company (NYDC), which is incorporated under the Special Companies Act with 100 percent ownership by the regional government. This has led business leaders to question the involvement of Myanmar government in the commercial activities of the project, as they believe the cooperation involving the government will eventually turn NYDC into entities like Myanmar Economic Corporation (MEC) and Union of Myanmar Economic Holdings (UMEHL), which are criticised by many people for monopolising many areas of businesses, trade, and industries in the country. According to NYDC, the project planners for the “new city” development aspire to rival the likes of Shenzhen, South Korea’s Incheon and Malaysia’s Iskandar.
Read More >

New 2018 report on Myanmar focuses on the country’s reform program and infrastructure pipeline
(2 April 2018) A new report from global research and consultancy firm Oxford Business Group (OBG) explores Myanmar’s efforts to enhance its investment environment and stimulate growth through a series of wide-ranging reforms. The report documents the impact of efforts to create regulatory certainty for investors through landmark legal developments and in reducing its infrastructure gaps in order to improve national productivity and galvanize the construction, logistics, trade, and tourism sectors. Key issues examined include the steps being taken to tap a broader range of financing mechanisms. With Myanmar proving to be an attractive draw for international manufacturers, the report highlights the policies that have been devised to promote the development of industrial clusters, increase competitiveness and expand capacity.
Read More >