Pace of contraction for Singapore’s IPI slows down in July 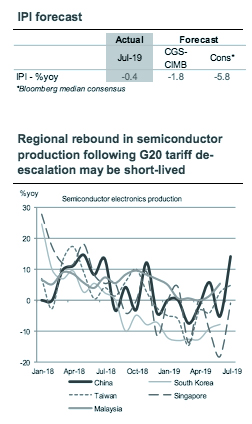 The decline in industrial production narrowed to 0.4% yoy in July
The decline in Singapore’s industrial production index (IPI) extended into the third month in July, but the pace of contraction whittled to 0.4% yoy (-8.1% yoy in June), an improvement on our expectations. Likewise, IPI excluding biomed fell at a milder pace of 0.7% yoy (-11.5% yoy in June). On a seasonally-adjusted basis, IPI expanded 3.6% mom in July (-0.3% mom in June).

Incremental gains in chemicals and transport engineering segments
Biomedical output growth slowed to 0.8% yoy (+5.4% yoy in June) as pharmaceutical production contracted 4.8% yoy (+5.7% yoy in June), superseding a 17.7% surge in medical tech (+4.2% yoy in June). An uptick in the chemicals segment (+2.2% yoy vs. – 3.3% yoy in June) was supported by stronger output in specialty chemicals and other chemicals, offsetting steep declines in petroleum and petrochemicals, which saw weaker production due to plant shutdowns in Singapore as well as lower demand from the trade war and competition from increased regional supply. Weak capex appetite continued to weigh on the precision engineering segment (-7.5% yoy vs. -2.3% yoy in June) while transport engineering (-0.2% yoy vs. -15.0% yoy in Jun) stabilised due to improved activity in the aerospace cluster, in addition to narrower losses in marine & offshore.

Trade outlook waxes and wanes as tit-for-tat resumes
We expect recent gains in Singapore’s semiconductor output to be short-lived, following the ratcheting up of trade tensions. In early-Aug, the US announced a 10% tariff on US$300bn of goods from China effective in two tranches on 1 Sep and 15 Dec. China retaliated with new 5-10% tariffs on US$75bn of US imports and a 25% tariff on US autos and auto parts effective on the same dates. Matters took a turn for the worse last week, as President Trump raised existing duties on US$250bn of Chinese goods from 25% to 30% (w.e.f. 1 Oct), and upped the ante on aforementioned tariffs from 10% to 15%. After a brief period of inventory restocking, we expect higher incoming tariffs to depress export demand and regional manufacturing activity again. 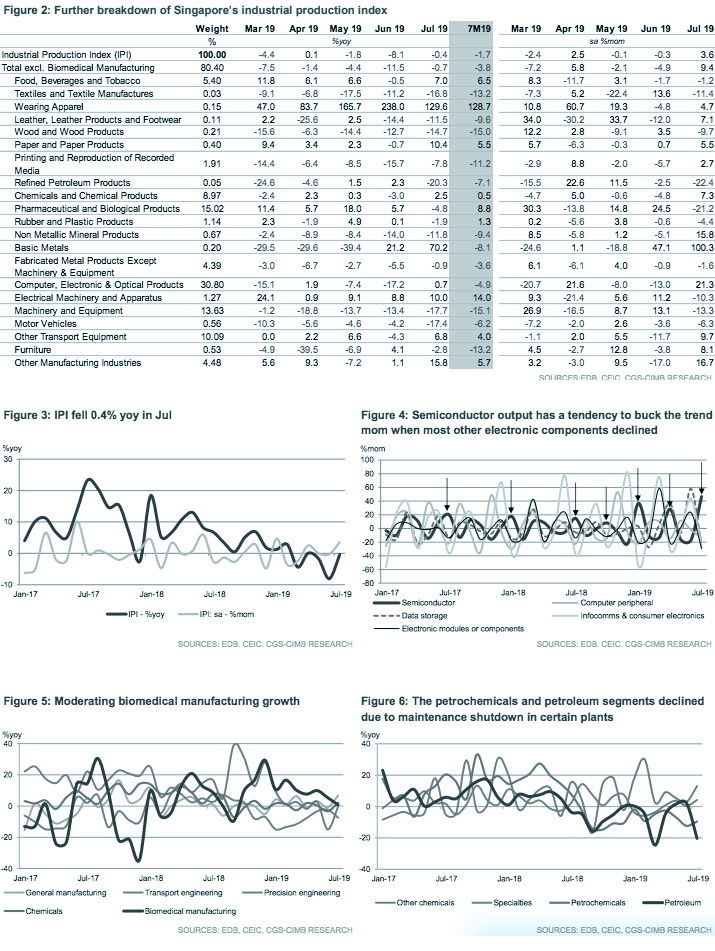 Originally published by CIMB Research and Economics on 26 August 2019.