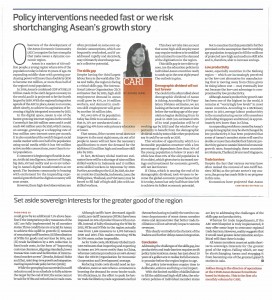 Observers of the development of the ASEAN Economic Community (AEC) recognise the key strengths that make ASEAN a dynamic economic region.

ASEAN is a market of 630 million people, a young region where 60% of the population today is below 35 years of age. Its expanding middle-class with growing purchasing power will more than double by 2030 to become 334 million, or more than half of the region’s total population.

In 2016, ASEAN’s combined GDP of US$2.55 trillion makes it the sixth largest economy in the world, and it is projected to be the fourth largest by 2050. With the regional integration agenda of the AEC in place, ASEAN is on course, albeit slowly, to achieve its aspiration of becoming a highly integrated economy by 2025.

In the digital space, ASEAN is one of the fastest growing internet regions in the world. Currently it has 260 million users and it could reach 480 million users by 2020, which means on average, growing at a whopping rate of four million new internet users per month. It is also considered the world’s largest social media market with over half of its population using social media while it has 700 million active mobile connections, more than its total population.

E-commerce is beginning to flourish in ASEAN. Artificial intelligence, Internet of Things, big data, virtual reality and so on are ushering in ASEAN’s digital transformation as we speak. The business community is buzzing with excitement for the impending exponential growth that the digital economy will soon create.

However, these high-level observations are often premised on some over-optimistic assumptions, which are frequently overlooked, if unaddressed rapidly and decisively, may ultimately shortchange ASEAN’s collective potential.

Despite having the third largest labour force in the world behind China and India, the region is facing a critical skills gap. The International Labour Organisation (ILO) estimates that by 2025, high-skill employment demand in ASEAN could grow by 41%, or 14 million workers, and demand in medium-skill employment will grow by another 38 million jobs.

Yet, over 60% of its’s population today has little to no education – that is, 11% are uneducated, and a staggering 49% have only primary education or lower.

That means, if the current trend does not improve in the next eight years, six out of 10 people in ASEAN will not have the necessary qualifications to meet the demand for the additional 52 million high and medium-skill jobs by 2025.

In fact, McKinsey Global Institute estimates there will be a shortage of nine million skilled workers in Indonesia and 13 million semi-skilled workers in Myanmar by 2030. Further, according to the ILO, by 2025, six ASEAN countries (Cambodia, Indonesia, Laos, the Philippines, Thailand, and Vietnam) may be forced to fill half of high-skill jobs with unskilled workers.

This does not take into account that some high-skill employment may require workers to be reskilled and retrained to meet the demand of the digitisation in the region.

This skills gap is too wide to ignore. Are the education policies in individual ASEAN countries ready to catch up in the next eight years? The outlook is grim.

Demographic dividend will not last forever

The clock for the often talked about demographic dividend of ASEAN, is ticking. According to UN Population Division estimates, we are looking at the next 20 years or less, before the working age population begins declining from its peak in 2025 (estimated 68% of its’s total population will be of working age by 2025) and the window of opportunity to benefit from the demographic dividend ends by 2040, while other projections say it could be as early as 2035.

This window of opportunity, which is a favourable population structure with low percentage of dependents (less than 30% of young population is below 15 years old, while less than 15% of old population is 65 or older), which gives rise to increased savings and investment for economic growth, will not last forever.

If China, which is nearing the end of its demographic dividend, took 40 years to become the global economic powerhouse that it is today, ASEAN has only half that time left to achieve its fullest economic potential.

Not to mention that this potential is further premised on the assumption that the working age population is equipped to fill the millions of projected new high and medium-skill jobs and is, therefore, able to increase savings.

ASEAN, especially countries in the Mekong region – which are increasingly perceived as the low-cost alternative for manufacturing which is moving away from China given its rising labour cost – may eventually lose out because the low cost advantage is compromised by low productivity.

Although ASEAN’s productivity growth rate of ASEAN has been one of the highest in the world, it remains at “worryingly low levels” in most ASEAN countries. According to a McKinsey report in 2014, average labour productivity in the manufacturing sector of its member (excluding Singapore and Brunei) is approximately 40% lower than in China.

An expanding workforce created by ASEAN’s young demographic, may be shortchanged by the low productivity. It has been projected that some of ASEAN’s member states will need to double or more than double their historic productivity gains to sustain historical economic growth rates. Surprisingly, these countries are Malaysia, Thailand, Brunei and Singapore.

Despite the fact that various surveys have often ranked the removal of non-tariff barriers (NTBs) as the private sector’s top concern, ASEAN has made little to no progress in this area.

Economists have projected that ASEAN could grow by an additional 7.1% above baseline if the integration policy measures of AEC are fully implemented by all member states. Three conditions are crucial for ASEAN to achieve this uplift in growth: (i) removal of remaining tariff barriers, (ii) liberalisation of NTB for goods and services by 50%, and (iii) trade facilitation by a 20% reduction in fixed trade costs, in the form of “improving customs clearance, aligning standards, lower transaction costs and facilitation of international market access”1.

While the grouping has succeeded in tariff reduction and is on schedule to fully achieve the target by 2018, the same cannot be said for NTBs, and reductions in trade costs.

Although tariffs have decreased significantly, non-tariff measures (NTMs) have been imposed on 24% of product lines with no tariffs. Instead of fully eliminating the NTBs by 2015, NTBs and NTMs in the region actually rose from 1,634 measures to 5,975 between year 2000 and 2015. This makes removing NTBs by 50% seem rather impossible.

As for trade costs, McKinsey Global Institute estimates that importing and exporting in ASEAN are 24% more costly than in China, whereas customs procedures in ASEAN are 66% slower than the Organisation for Economic Cooperation and Development (OECD) average.

Reducing trade costs should need no justification, more so now when e-commerce is boosting the demand for cross border trade. Yet oftentimes, in the effort to push for better trade facilitation, trade organisations find themselves having to justify to the need to customs departments of some ASEAN member states and demonstrate that better trade facilitation will not adversely impact customs revenues.

This clearly contradicts the rhetoric of the leaders and further delays ASEAN integration.

Addressing the challenges of skills gap, low productivity, and trade barriers requires swift policy interventions. ASEAN has just about 20 years of a golden era to realise its full economic promise before the region begins to age.

With the limited mobility of skilled labour to fill the additional high-skill jobs, education policies of individual member states are key to addressing the challenges of skills gap and productivity.

Whereas for trade impediments, if the AEC 2025 blueprint is truly implemented, it may offer some hope to overcome regional trade barriers. However, reality suggests that it would need greater determination and political will than there is today.

All ASEAN members must set aside short-term sovereign interests for the greater good of the region. Failing which, we may be shortchanging ASEAN and stopping it from becoming one of the greatest growth stories in Asia.