Home / News & Views / In The News / Press Release: ASEAN and China must collaborate closely to ensure the success of the Belt and Road Initiative (BRI) in the region

Press Release: ASEAN and China must collaborate closely to ensure the success of the Belt and Road Initiative (BRI) in the region 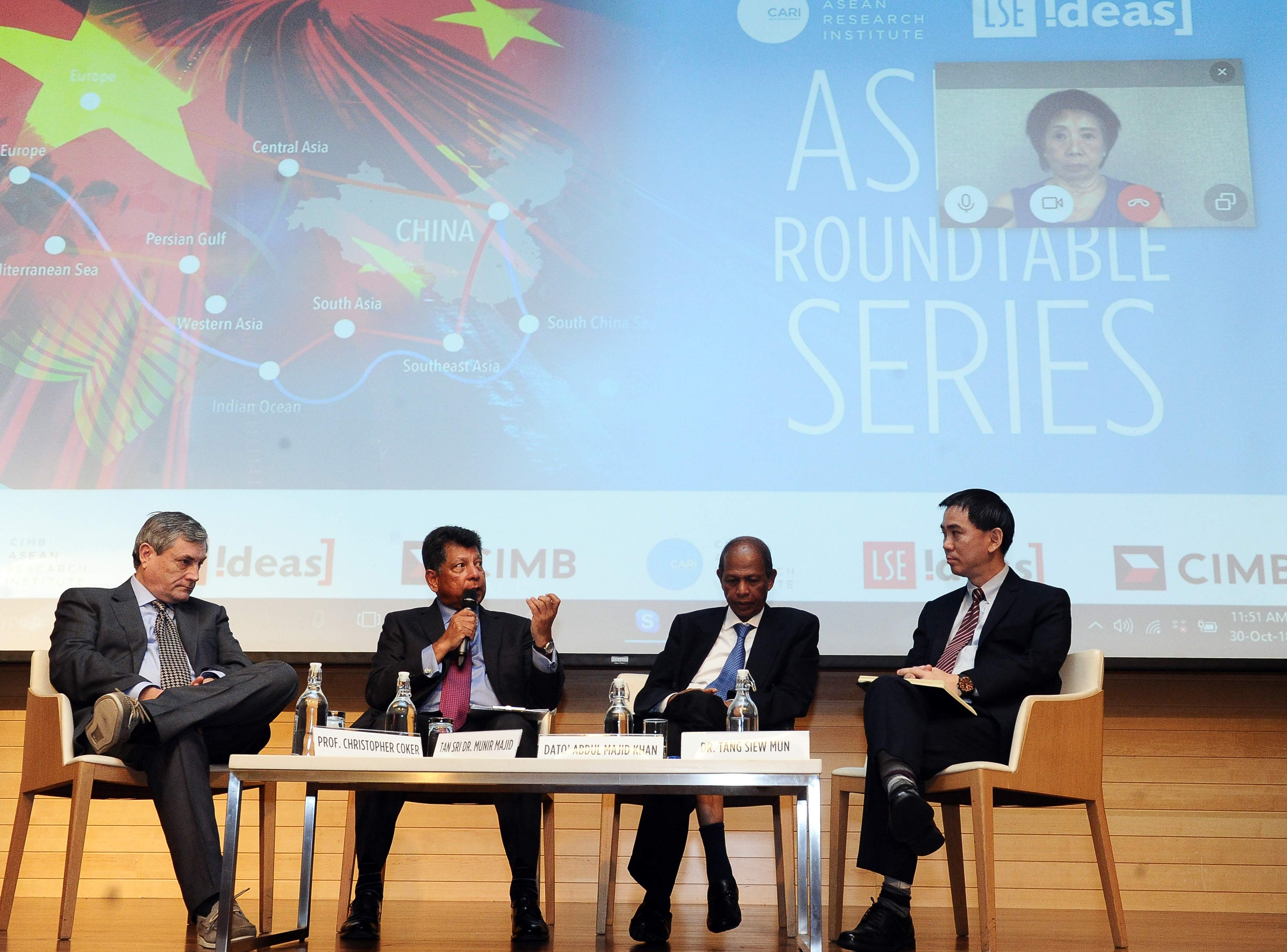 Kuala Lumpur, 30 October 2018 – ASEAN and China must collaborate closely to ensure the success of the Belt and Road Initiative (BRI) in the region. CIMB ASEAN Research Institute (CARI) Chairman Tan Sri Dr. Munir Majid emphasised this view in the panel discussion after the launch of a joint report by CARI and LSE IDEAS (Centre for International Affairs, Diplomacy and Strategy). The report entitled, “The BRI and Southeast Asia” was launched by Malaysia’s Minister of Economic Affairs Dato’ Seri Mohamad Azmin Ali today. 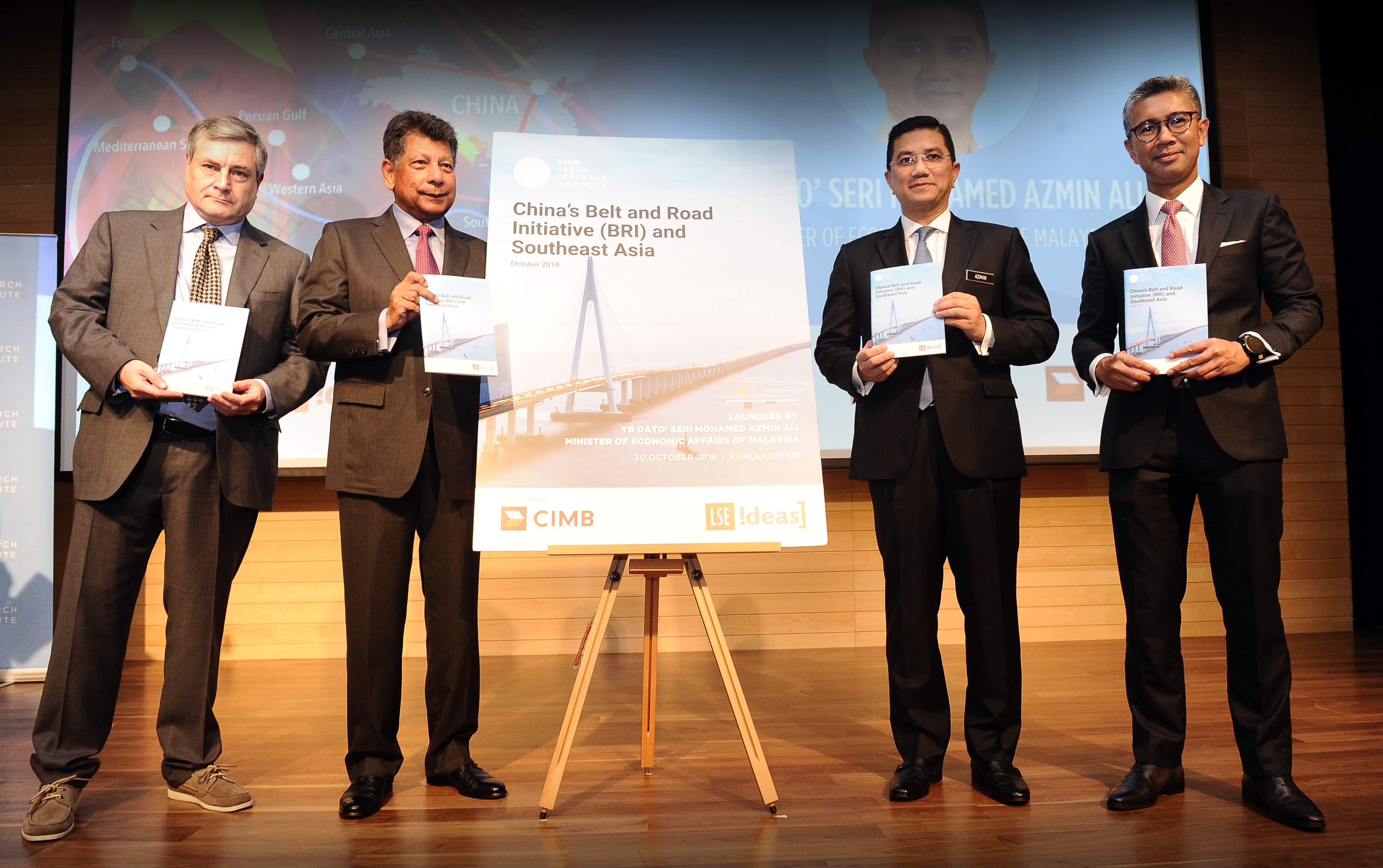 Dr. Munir proposed that a joint task force be established by ASEAN and China comprising official and private sector representatives to establish high-level guidelines on principles and practices in regional BRI projects whose detailed terms will be up to individual states to determine. This task force should also work to align the Master Plan for ASEAN Connectivity (MPAC) 2025 with the BRI so that regional infrastructure development takes place in an orderly manner without waste and costly white elephants.

He noted: “ASEAN-China economic relations are extremely strong and well-founded. The trade and, increasingly, investment numbers speak for themselves. At the 21st ASEAN-China Summit in Singapore next month, the ASEAN-China Strategic Partnership Vision 2030 will be adopted which will further cement the close economic relations first formalised in Bali in 2003 when China became ASEAN’s first dialogue partner to have a strategic partnership.

“Collaboration on BRI should be a part of the ASEAN-China Strategic Partnership Vision 2030 to ensure its resounding success and to address kinks in BRI roll-out as have become evident. Objective, expert and professional project terms and execution will anticipate and remove problems that should not be allowed to puncture the visionary BRI – whose potential for connectivity are considered unmatched in human history.”

The CARI Chairman observed that the five guiding principles of MPAC 2025 – sustainable infrastructure, digital innovation, seamless logistics, regulatory excellence and people mobility – could be brought to the highly imaginative BRI in the process of lifting the region to a new level of infrastructure development.

Taking another example, regulatory excellence points to good regulatory practice in the preparation, adoption and implementation of rules, regulations and procedures in the region through standards harmonisation, mutual recognition and technical regulations.

Pointing to more specific situations, Dr. Munir identified Singapore’s MOU with China signed in Beijing last April to promote greater collaboration between Singapore and Chinese companies in third-party markets under the BRI. In this arrangement, a joint working group is to be formed to identify sectors and markets of mutual interest, and to organise business matching activities and forums to facilitate third-party market cooperation.

While commercial in nature, there is no gain saying principles, standards and procedures from Singapore’s well developed legal, financial and project management infrastructure will be brought to BRI projects. In a not unconnected development, Dr. Munir drew attention during the discussion to Singapore’s announcement earlier this month of the establishment of a new government agency called Infrastructure Asia to help structure projects to make them more “bankable.”

Dr. Munir quoted Singapore’s Second Minister for Finance: “So if you’re able to structure it right such that the income stream, the revenue that comes in, enables you to pay off your loan or whatever financing you’ve taken, then the project will be fine and it’s a win-win for all.”

Dr. Munir ended his opening statement at the panel discussion: “There already are parameters and specific initiatives that can be made to coalesce with China’s BRI to achieve a rousing success in Southeast Asia that would cause the world to sit up and notice, and in the process marginalise notions of the BRI being nothing more than China’s grand design to dominate the world.”

Earlier, Dato’ Seri Azmin Ali who launched the joint publication said that notwithstanding the US-China trade war, strategic interests in the South China Sea must be a collective concern for Malaysia within the context of ASEAN. The Belt and Road Initiative is conceptually sound and good, but nations involved must have their sovereignty protected at all times. 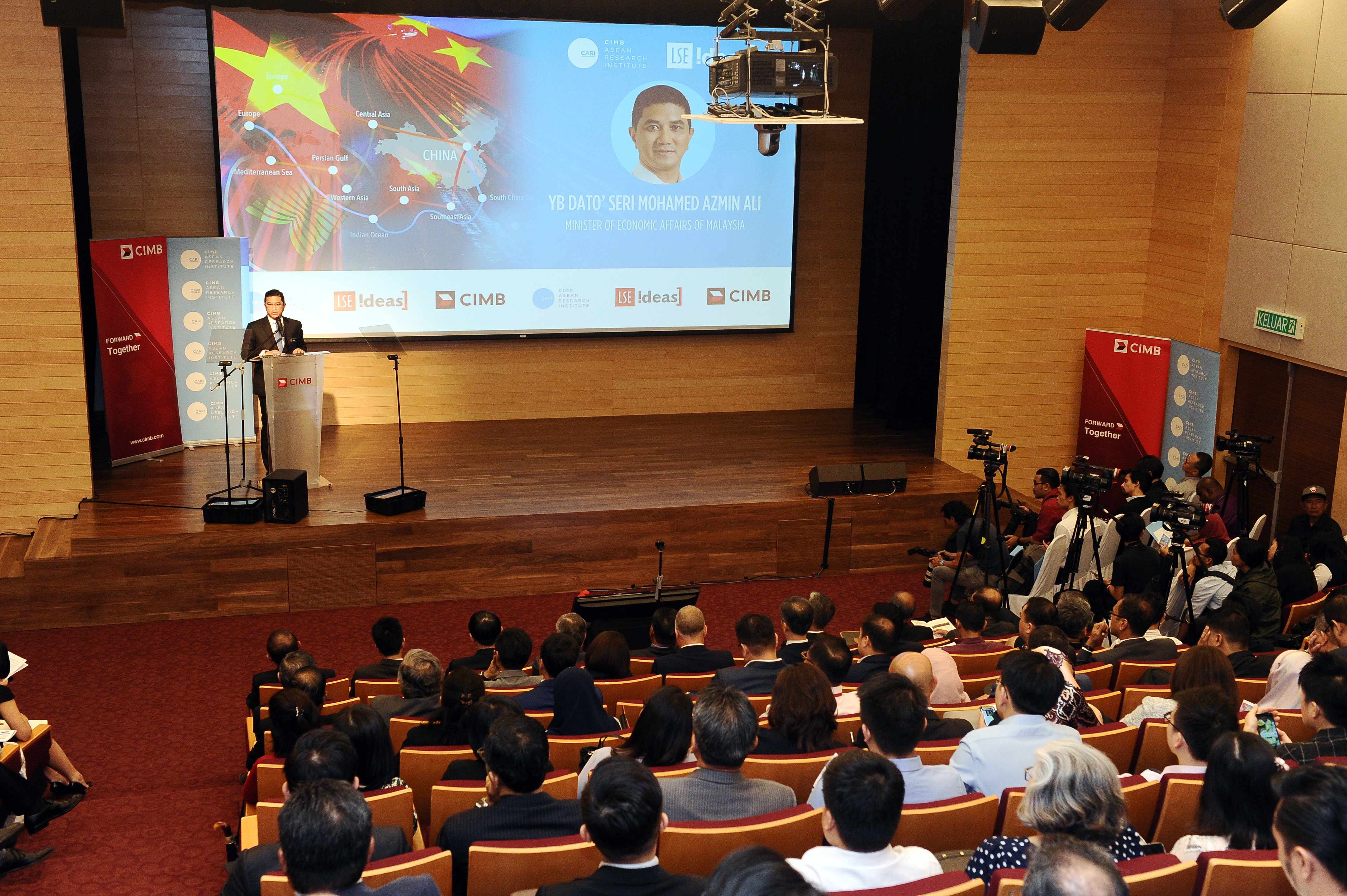 As a former envoy to China, Dato’ Abdul Majid acknowledged that ASEAN relations with China are asymmetrical and complex, thus, the bloc needs to identify and consolidate its common core interests and concerns as the basis of negotiations with China.

“ASEAN must also recognise the importance of China as the driver for regional and global growth. Participating countries must devise their projects strategically, by making sure they conform to their needs and affordability to mutually benefit from the vast opportunities the Belt and Road Initiative can offer,” continued Dato’ Abdul Majid during the discussion.

Going forward, Dato’ Abdul Majid asserted that the BRI should not only focus on infrastructure development but should also embrace China’s other strengths, such as digital technology to support countries who want to be part of the 4IR agenda.

A keen analyst on China’s strategic and economic policies, Pauline Loong reminded participants of the roundtable that the BRI does not lend itself to multilateral negotiations, but it is a broad concept of China introducing projects to different countries and offering various forms of financing that range from direct investment to loans.

“The main benefit is access to financing not otherwise available for worthwhile projects. Costs arise from the lack of careful assessment of the risks versus the ultimate benefit of each project for the country. Growth opportunities for any nation, including ASEAN countries, depend on choosing very carefully the aspects of the BRI that match the domestic need of the nation involved,” she said.

An expert in security and globalisation, Professor Christopher Coker noted that the BRI initiative is one of the most important developments of this era or any other decade. However, he raised questions over the challenges that lie ahead for China and countries which are part of the initiative.

“It is important to acknowledge the challenges ahead. Will Chinese bodies such as the State Administration of Foreign Exchange (SAFE) and State-owned Assets Supervision and Administration Commission of the State Council (SASAC) as well as the country’s financial industry regulators which are responsible for setting the actual parameters such as budgets and standards of operationalisation be up to the job? Will the contracting countries be able to avoid over-indebtedness and will the governance regime be able to deal with problems like insider dealings? Finally, will the big infrastructure projects be on budget and on time? History would suggest we be cautiously optimistic,” said Professor Christopher Coker.

Dr. Munir concluded by saying that the panel discussion, as indeed does the joint publication of CARI-LSE IDEAS, highlights the complexity of the issues. But he underlined the need to also provide a distillation, a possible policy direction – which think-tanks such as CARI and LSE IDEAS are committed to doing.

In this regard, he reiterated his opening points as a means to break down problematic matters at both general policy and specific BRI project levels. Dr. Munir concluded the panel discussion by stating: “The great and historic opportunities of the BRI must not be passed up. The challenges must be creatively resolved.”