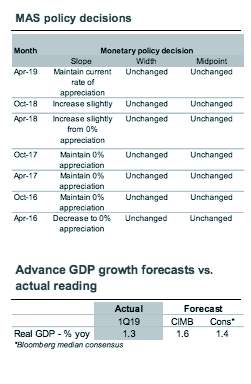 MAS halts monetary policy tightening
The Monetary Authority of Singapore (MAS) maintained the slope, width and centre of the S$ nominal effective exchange rate (NEER), after two consecutive rounds of modest tightening in April and October 2018. The decision was in line with our forecast as well as those of the majority of economists surveyed by Bloomberg.

Dovish pivot on weaker growth outlook
MAS’s dovish turn came as policymakers turned more cautious on the growth outlook, citing significant uncertainties in near-term external economic conditions. Today’s release of Singapore’s advanced GDP readings for 1Q19, which showed moderating growth (+1.3% yoy vs. +1.9% yoy in 4Q18; +2.0% qoq SAAR in 1Q19 vs. +1.4% qoq SAAR in 4Q18), confirms the run of subdued data outturn in trade and manufacturing activity. To reflect 1Q19 growth disappointments and the delayed resolution from US-China trade negotiations, we cut our full-year GDP growth forecast from 2.6% to 2.3%. Likewise, MAS expects GDP growth to be slightly below potential in 2019F, landing slightly below the midpoint of its 1.5-3.5% range.

Setback from manufacturing offsets uptick in other sectors
The manufacturing sector declined 1.9% yoy in 1Q19 (+5.1% yoy in 4Q18), its first contraction since 1Q16, attributable to slippages in electronics, precision engineering, and chemicals segments. Domestic-oriented sectors fared better. The construction sector posted its first rebound after 10 consecutive quarters of contraction (+1.4% yoy vs. -1.0% yoy in 4Q18), primarily supported by private construction activities. Growth in the services sector (+2.1% yoy in 1Q19 vs. +1.8% yoy in 4Q18) was backed by higher demand for information & communications and financial & business services.

Monetary policy settings to remain on hold
The cautious language in MAS’s policy statement, as well as the downgrade in its growth and core inflation projections, cement our belief that further monetary tightening is off the table for the rest of 2019F. We retain our view that the slope, width and midpoint of the S$NEER policy band will remain unchanged at the next policy review in October 2019. 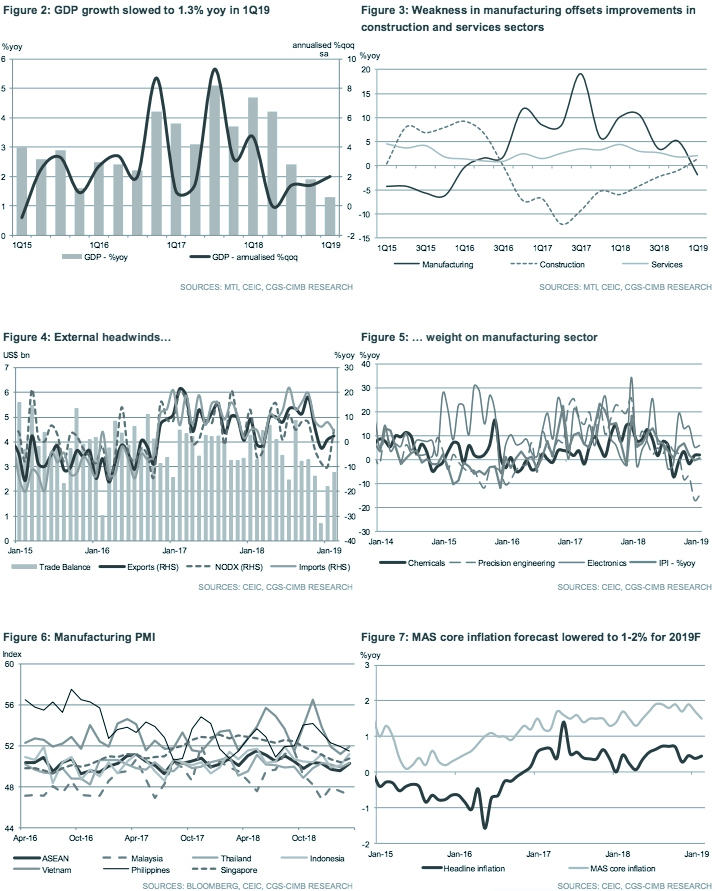 Originally published by CIMB Research and Economics on 12 April 2019.