US-China spat could kill off hopes of electronics rebound in 2H19
Electronics production stabilised (-0.6% yoy in April vs. -15.1% yoy in March), largely owing to the semiconductor cluster (+0.3% yoy vs. -16.2% yoy in March). However, there are few reasons to cheer, as US-China tit-for-tat, ranging from import tariffs, a prolonged US ban on Huawei and retaliatory curbs on market access, would hurt sentiment and spending by consumers and businesses. Barring an immediate reversal of the ban, expectations of a significant recovery in global semiconductor demand in 2H19 are now in jeopardy.

Precision engineering hampered by weak tech cycle
April marked the fifth successive month of output declines for the precision engineering segment (-10.4% yoy vs. -11.4% yoy in March), with deterioration in the machinery & systems segment (-20.6% yoy) reflecting the weak outlook for semiconductors. Transport engineering output dipped 1.1% yoy in April, the first drop since February 2018, due to a lull in offshore and shipbuilding & repairing activities. The chemical sector registered a reversal in April (+1.9% yoy) after contracting briefly in March, buoyed by increased production of ‘other chemicals’ (+9.3% yoy) namely fragrances, and specialty chemicals (+0.9% yoy).

Watch out for patchiness in biomed contributions
Biomedical manufacturing continued to record decent growth in April (+11.2% yoy vs. +13.3% yoy in March), helped by strong pharmaceutical output (+10.9% yoy in April), which has posted seven consecutive months of gains, the longest streak since 2011. However a combination of a high base and the lumpy nature of the production process could inject volatility into output growth over the next few months.

Early indicators point to renewed trade weakness in May
The early read-through from flash manufacturing PMIs for May in the US (50.6 vs. 52.6 in Apr) and Japan (49.6 vs. 50.2 in April) as well as a sharp deterioration in South Korea’s preliminary export tally for the first 20 days of May (-11.7% yoy vs. -8.7% yoy in April) suggest the return of downward pressures on Singapore’s NODX in May following the escalation of trade tensions between the US and China. 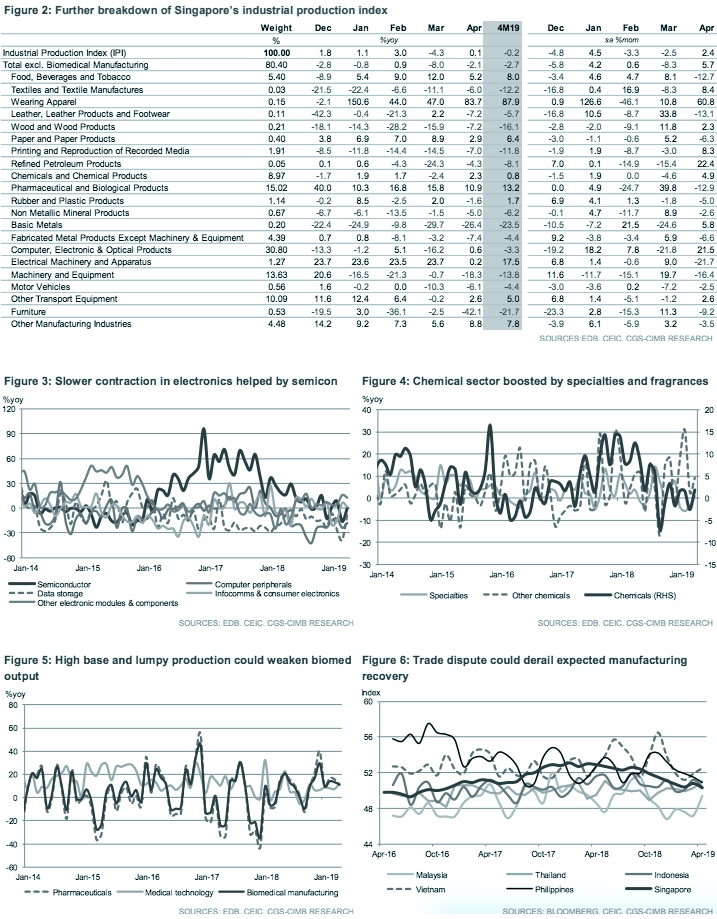 Originally published by CIMB Research and Economics on 24 May 2019.