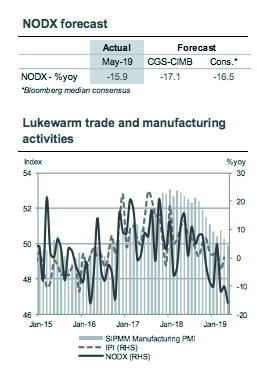 The weakest reading of electronic exports since Jan 2009
Consistent with the fall in SIPMM electronics PMI (49.4 pts in May vs. 49.5 pts in April), exports of the five major electronic products declined sharply (-33.8% in May yoy vs. – 16.4% yoy in April). This was led by the fall in exports of integrated circuits (ICs, -39.8% yoy) which form the bulk of electronics deliveries. Exports of other segments such as PC parts, disk media products, PCs and diodes & transistors deteriorated too. The semiconductor outlook remains poor, reflecting the World Trade Semiconductor Statistics’s (WSTS) recent downgrade of global semiconductor sales for 2019 (-12.1% in May vs. -3.0% previously).

More misery ahead for Singapore
US President Donald Trump has announced that he has no fixed deadline for tariff imposition on another US$325bn of Chinese imports and a fresh round of tariffs will be levied if the officials fail to meet during the G20 summit in Japan. Singapore’s forwardlooking indicators also signal subdued manufacturing activity as the SIPMM manufacturing PMI dipped below the 50 mark for the first time since August 2016 (49.9 pts in May vs. 50.3 pts in April) while Nikkei Singapore PMI dropped to 52.1 pts in May (53.3 pts in April). Amid external uncertainties which are likely to weigh on the growth and inflation outlook, we expect the Monetary Authority of Singapore (MAS) to remain cautious and maintain the current slope, width and centre of the S$ nominal effective exchange rate (NEER) policy band in October. 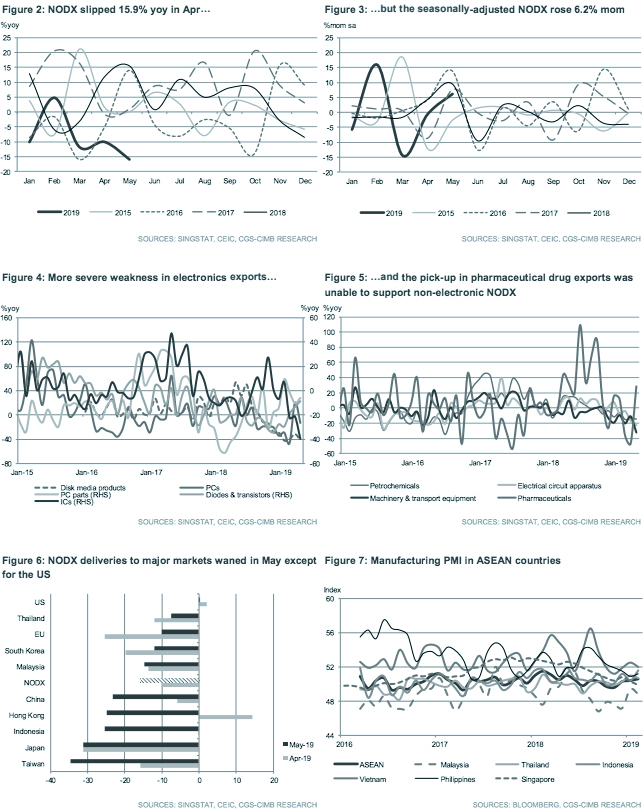 Originally published by CIMB Research and Economics on 17 June 2019.