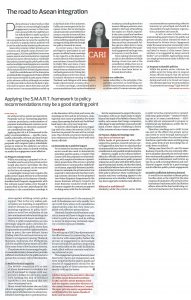 Policy advocacy is hard work, in that it takes an excruciatingly lengthy engagement process to find common grounds with the rightful policy stakeholders to convince a point. It requires both top-down and bottom-up approaches to move the needle, if at all. Contrary to popular belief – political will – is not the only barrier hindering the process.

The Before: Guerilla Style

Not until the establishment of the Enterprise and Stakeholder Engagement Division (ESED) at the ASEAN Secretariat in 2016, many of these policy advocacy efforts, although not unique to CARI, were akin to “shots in the dark” or “guerilla-style” in nature. More often than not, the private sector’s recommendations ended up in the blackhole of unknown. Unlike our counterparts from the EU, the US and Japan, ASEAN businesses and entities face resource-scarcity in terms of time, funding, technical capability and suffer significant disadvantages in being referred through the policy channels in ASEAN.

The After: Guided Approach

In recent years, I have been privileged to participate in and present at official ASEAN meetings in my capacity as the Deputy Executive Director of ASEAN Business Advisory Council, facilitated by ESED. This year alone, at the working lunch with ASEAN Finance Ministers and Central Bank Governors in Chiang Rai; working dinner at the 51st ASEAN Economic Ministers in Bangkok, and Dialogue with ASEAN Leaders/Heads of Government, to name a few.

In these meetings, consolidated policy recommendations from various business associations, including those from ASEAN’s dialogue partners, were tabled in the hopes of benefiting ASEAN as a whole, especially the Micro, Small and Medium Enterprises (MSMEs). While these interface meetings were valuable, they are at best “ceremonial”. Follow-ups are often slow to none, and less than effective. The quality of engagement has huge room to improve, to say the least.

From making voluntary policy calls on the sidelines, to finally having a front-row seat at the consultation tables, there are at least seven “simple” observations I wish to have been better informed before. 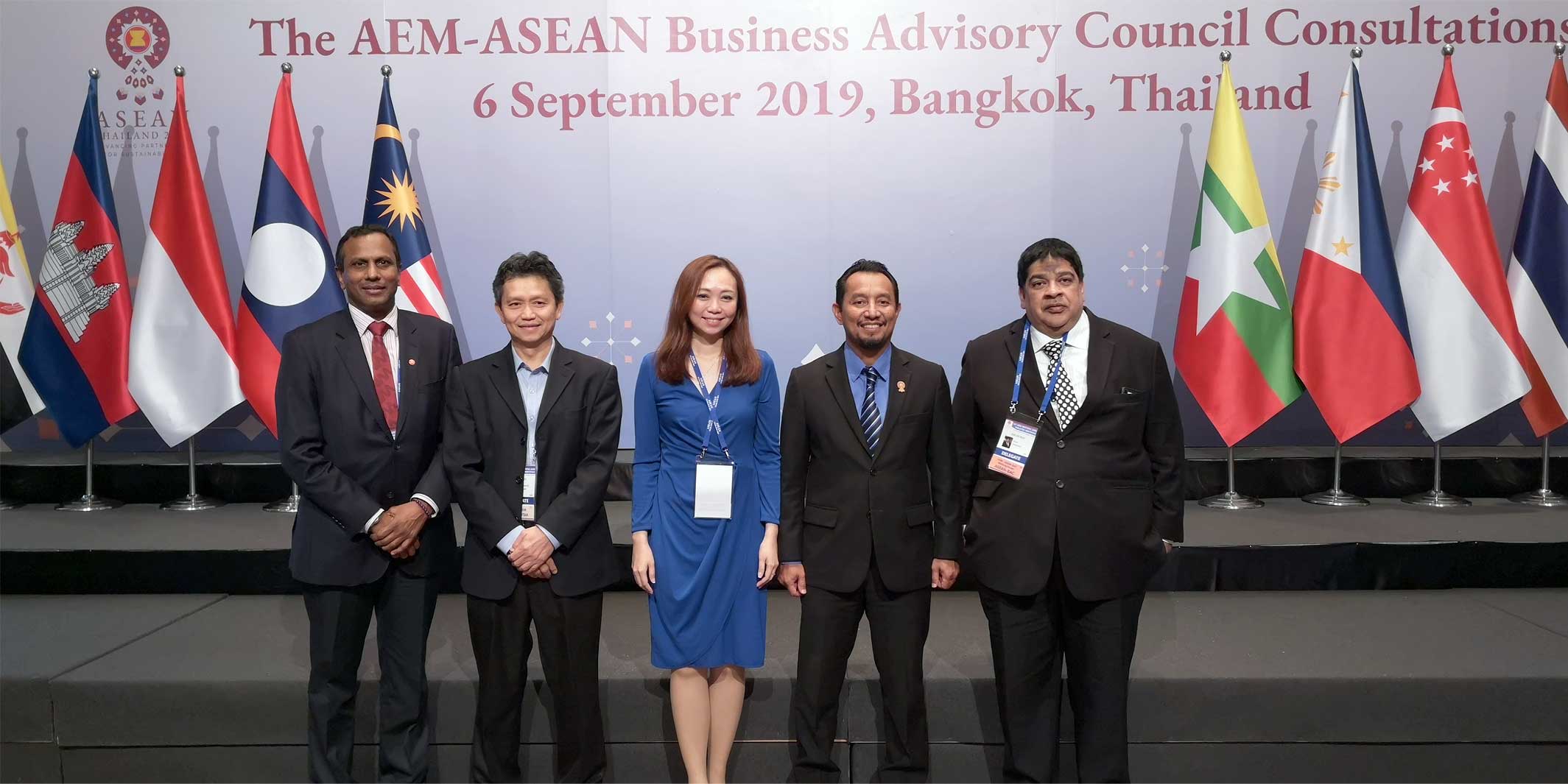 1) Come as a collective

ASEAN subscribes to the principle of impartiality and strives to avoid being considered biased towards any member states or private entities. To ensure success, policy recommendations representing collective interests are prioritised and should be channelled through business organisations, chambers and councils.

In 2017, in order to better reduce understanding gaps between the public and private sector, ASEAN has released the Rules of Procedures for Private Sector Engagement under the ASEAN Economic Community (AEC). Only those entities “associated with ASEAN and listed in Annex 2 of the ASEAN Charter entities; or as suggested by ASEAN sectoral bodies” are acceptable. Approaching ASEAN as a single private sector entity is likely to be a futile effort.

While the private sector criticises the public sector for being slow to respond, ASEAN officials lament that the private sector’s recommendations lack structured details, tend to be broad and vague. The officials regard any recommendations “to promote/to encourage” high-level ideals without action points to be impractical. Proposals such as “promoting paperless customs procedures, modernisation of payment and settlement systems, accelerate migration to electronic payment” are considered less specific.

Applying the S.M.A.R.T. framework to the policy recommendations — specific, measurable, achievable, relevant and time bound — may be a good starting point. Making the proposals with targeted policy stakeholder groups in mind as the audience, as well as researching what ASEAN is already working on makes the engagement more effective.

Structuring a proposal to be “actionable” may be easy, the private sector would also need to articulate the idea and how the proposal can be executed in the form of “concept notes”.

A meaningful concept note requires the public sector’s input. Yet how to arrive at that is a challenging matter due to the absence of institutionalised and frequent engagements with the relevant ASEAN bodies, even though it is prescribed in the AEC 2025 Blueprint. The invitation to the consultation meetings is at the discretion of the chair of meetings and worse, the meetings are few and far in between, ranging from once a year to probably a few times a year. Thus causing the back-and-forth feedback loop to be a very, very long haul.

To short-circuit this lengthy process, engaging with the ASEAN Secretariat (ASEC) on how best to present the case with a concept note that details practical implementation milestones would go well with ASEAN officials.

To increase the success rate, the private sector would also need to demonstrate potential positive gain or impact that comes with the proposed recommendation, with empirical evidence or quantitative projections. This serves to provide justification to various policy stakeholders of ASEAN, especially domestic jurisdiction. For example, the private sector was required to demonstrate that fast-tracking customs clearance for the proposed Low-Value Shipment Programme by ASEAN BAC Joint Business Councils would not be revenue negative for customs, as opposed to doing away with the de minimis.

But the requirement to support the recommendation with an in-depth study is clearly beyond the depth of the MSMEs of ASEAN. This reality only means that foreign companies, often larger in size and are better resourced, would stand a better chance of lobbying in favour of the interests of extra-ASEAN companies.

Top-down or bottom-up?
While the heads of government often offer supportive gestures towards private sector suggestions, they have to cascade policy recommendations downward for further consideration and possible implementation.

However, caught in the internal deliverables, the officials are the least incentivised to advance any private sector policy proposal unless those that are in-line with their KPIs, resulting in bureaucratic inertia. On the other hand, some officials believe their role is to carry out ministerial instructions and therefore wield little policy influence. These conflicting dynamics send very confusing signals to the private sector as to whether a bottom-up or top-down approach would be most effective.

Bilateral or multilateral?
Similarly, while the private sector looks to ASEC to be the central party to connect with ASEAN policy bodies instead of reaching out to ten ASEAN jurisdictions, ASEC is after all not empowered to propose or implement any legislation, unlike the European Commission. Therefore, reaching out to ASEC is just one part of the effort; the private sector also needs to work through the national policy channels so that when the relevant bodies that form a particular ASEAN working group meet, some form of pre-knowledge has already been socialised.

Taking cues from the EU- and US-ASEAN Business Councils, who are extremely effective in all policy channels, the real work starts from various policy pipelines. A combination of top-down endorsement, and bottom-up buy-in; as well as having bilateral and multilateral support would be a good strategy mix for effective public-private engagement.

It would be too careless to blame “policy hurdles” alone as the culprit for the slow progress of integration. The private sector sometimes frustrates policy facilitation effort. After all the hard work being carried out, businesses cited “business decision” against utilising certain policy support. That is the very reason policymakers are insisting to have “significant market demand” as a prerequisite to pursuing regulatory or policy facilitation to avoid low utilisation of any new mechanism before launching into negotiations with ASEAN members.

This is a valid consideration as even with seemingly aligned policy direction between the private and public sector does not guarantee successful implementation. Cases in point, the now-defunct ASEAN Trading Link, the new local currency settlement arrangement among Thailand, Malaysia, Indonesia, the Philippines, and the Qualified ASEAN Banks all suffer from some form of low business interest.

The private sector is encouraged to gather reasonable industry demand so that it provides sufficient motivation for the public sector to pursue the necessary policy liberalisation.

The MSMEs constitute 97-99% of ASEAN businesses in numbers but are unequipped to engage with ASEAN policy bodies for advocacy. Apart from funding, the lack of technical capability is one handicap area that sets these businesses back.

Many of ASEAN businesses also see little value in engaging in policy consultation and are generally less keen to attend consultation meetings due to potential business opportunity cost. On the contrary, the EU and US businesses not only usually turn up in full force when such consultation opportunities arise, but they will also come prepared with effective presentations.

National chambers, business councils in ASEAN will have to begin to see the value in policy advocacy and be willing to invest in improving technical capacity to better represent MSMEs.

The setting up of the Enterprise and Stakeholder Engagement Division (ESED) has demonstrated its effectiveness in connecting the private sector with the ASEAN policy bodies. The process of engagement is increasingly structured and the quality is improving, most noticeable in the trade facilitation track, albeit without concrete results being achieved as yet.

The engagement process, however, must have better clarity and transparency, and most importantly the quality, depth and results of engagement should be the ultimate goals of these exercises than merely ticking the boxes.