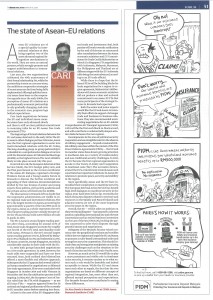 Last year, the two organisations celebrated the 40th anniversary of their formal relationship. Yet, while the partnership is seen as a success story, the ambitious cooperation strategies of recent years are far from being fully implemented. Although political-security issues have been on the cooperation agenda since the early 2000s, the perception of ASEAN-EU relations as a predominantly economic partnership is only gradually changing. And even in the economic area progress lags behind expectations.

Free trade negotiations between the EU and individual ASEAN member states have only advanced slowly and there is still no clear political commitment to resuming talks for an EU-ASEAN free trade agreement (FTA).

The beginnings of formal relations between the EU and ASEAN date back to early 1970s. The EU is ASEAN’s oldest dialogue partner. Likewise, ASEAN was the first regional organisation to enter into institutionalised relations with the EU. Today this long-standing group-to-group partnership is embedded in a comprehensive dialogue structure with the biennial ASEAN-EU Ministerial Meetings (AEMM) as the highest forum. The next AEMM is likely to take place around July this year.

From 26 to 28 February the European External Action Service (EEAS), the EU’s foreign policy arm, and the Royal Thai Government as the current coordinator of the ASEAN-EU dialogue organised a Strategic Thinkers Forum and a Young Leaders Forum in Brussels to discuss the further evolution and upgrading their relations. Recommendations drafted by the two forums of senior and young experts from politics, civil society, academia and the private sector, will feed into the AEMM.

The discussions in Brussels left no doubt that impressive achievements are visible in inter-regional trade and investment relations. The EU is the largest investor in ASEAN, accounting for approximately a quarter of the total FDI stock in the region. ASEAN as a whole represents the EU’s third largest trading partner outside Europe (after the US and China) with EUR 207.9 billion of trade in goods in 2016.

The EU is ASEAN’s second largest trading partner after China, accounting for around 13.5% of total ASEAN trade. Singapore accounts for roughly one-fourth of the EU’s total merchandise trade with ASEAN. Vietnam is the EU’s second largest ASEAN trading partner (19.1%), followed by Malaysia (17.9%), Thailand (16.3%) and Indonesia (12.6%). All ASEAN countries, except Singapore, recorded a considerable surplus in their trade with the EU.

In 2007, both groups launched negotiations on a Free Trade Agreement. In 2009, however, the trade talks were suspended and have not been resumed. Soon, both ASEAN and the EU realised that bilateralism offered a more flexible and effective approach. Subsequently the EU approached several individual ASEAN members for negotiations on bilateral free trade agreements. FTAs were concluded with Singapore in October 2014 and with Vietnam in December 2015 but the ratification process is still ongoing. In May 2017, the European Court of Justice ruled that the FTA with Singapore – as all future FTAs – requires approval from the 38 national and regional parliaments of the currently 28 EU member states before entering into force.

At least in the case of the EU-Singapore bilateral trade and investment deal, both parties will work towards ratification by the end of this year as announced after consultations between the ASEAN Economic Ministers and EU Commissioner for Trade Cecilia Malmström on 2 March in Singapore. FTA negotiations with Indonesia, Malaysia, Myanmar, the Philippines and Thailand are at different stages with the EU-Indonesia talks being the most advanced, according to an EU trade official.

While there is a hope that the bilateral FTAs will be building blocks for fresh negotiations for a region-to-region agreement, Malmström’s deliberations with ASEAN economic ministers did not produce a clear and univocal commitment to an ASEAN-EU FTA that many participants of the strategic forums in Brussels had expected.

Both the senior and junior experts would like the EU and ASEAN to intensify their efforts in support of stronger trade and business-to-business relations. They also recommended accelerating negotiations for an EU-ASEAN Comprehensive Air Transport Agreement (CATA). CATA will be the first such block-to-block accord, and will contribute to substantially deepen aviation links between the two regions.

Developments in the area of political security cooperation are less straightforward. In the absence of military engagement – beyond occasional British military exercises within the context of the Five Power Defense Agreements (FPDA) – the EU and its member states have shown growing attention to Southeast Asia on a variety of transboundary and non-tradition security challenges. In 2012, the EU became the first regional organisation to accede to the Treaty of Amity and Cooperation in Southeast Asia (TAC). The accession demonstrated the EU’s commitment towards ASEAN and constituted an important milestone in ASEAN-EU relations to promote peace, security and stability in the region.

More specifically, ASEAN and the EU have intensified their cooperation on maritime security. The European External Action Service has hosted High-Level Dialogues on maritime security, in the region. Four have been held so far. Currently, the South China Sea disputes related to territory and resources in the Spratly and Paracel Islands and adjacent waters are one of the most important security issues in the region.

Overall, the EU – which takes no position on these territorial disputes – has assumed a coherent position upholding international law and relevant conventions such as United Nations Convention on the Law of the Sea (UNCLOS), inviting the parties concerned to solve their disputes through peaceful means and negotiations.

Delegates of the Brussels forums voiced concerns over the geopolitical tensions and troubles within the two regions and urged the EU and ASEAN to promote a rules-based international order and strengthen security cooperation. This should include clear and strong joint standpoints on existing security challenges such as the situation in the South China Sea and the wider Indo-Pacific area. However, as much as the EU would like to play a more prominent and visible role in Southeast Asian security, it remains unclear to what extent such a role would be desirable and indeed acceptable to ASEAN. While the EU and ASEAN meet each other as equals, the fact that the two organisations are based on different concepts of regional integration, has, more often than not, affected mutual perceptions and expectations. The Brussels forums have contributed to easing these differences.