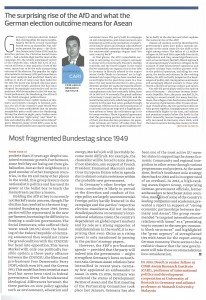 Germany’s national elections looked like a boring affair for many months. Angela Merkel’s record-equalling fourth term as chancellor was taken for granted. Her party – the Christian Democratic Union (CDU) and its Bavarian partner, the Christian Social Union (CSU) – had a double digit lead for most of the campaign. Yet, the widely anticipated victory of the CDU/CSU bloc, which lost 8.5% but still won a clear majority of 33% of the votes, turned out to be the only unsurprising outcome of the elections. The populist far-right Alternative for Germany (AfD) performed better than most analysts had predicted. Nearly 6 million voters or 12.6% cast their ballot for the AfD. The party formed only four years ago on a euro-sceptic platform but has since adopted increasingly nationalist and racist positions. With 94 members in the 709-seat national Parliament, the Bundestag, the AfD will be the third strongest political force.

Commentators have rightly spoken of dramatic and historic changes to German politics. For all of the country’s post-World War II history it was unthinkable that an openly xenophobic party could enter the Bundestag. During the election night party leaders were quick to dismiss “right-wing” and “Nazi” labels and called the AfD a “conservative-liberal” party. However, many of the AfD’s soon-to-be members of parliament have openly expressed extremist views. The party built its campaign on anti-immigration, anti-Islam and anti-Euro sentiments as well as the promotion of conservative family values and German culture. There was a nationalist undertone throughout. One of the controversial campaign slogans read “Get your country back!”

At first glance the AfD’s remarkable success is surprising. In every respect Germany is doing well economically. Europe’s leading economy and the fourth largest in the world thrives especially on exports. One in four jobs in Germany is directly related to the export sector. Goods “Made in Germany” are in high demand and export figures have reached new record highs for the past three years in a row. Since the last national elections in 2013 GDP per capita has increased by almost 9% to EUR 38,114 in 2016. Over the past ten years the unemployment rate has constantly fallen from 9% in 2007 to currently 5.7%. The grand coalition of Germany’s major parties CDU/CSU and the Social Democrats (SPD), which has governed the country for the past four years, pushed through important reforms such as the introduction of a national minimum wage and a flagship pension reform to lower the retirement age to 63 for many workers. There is general agreement that the governing parties delivered on most of their previous election promises. On paper, most Germans are better off today than four years ago. Why did the grand coalition nevertheless suffer so badly in the elections and what explains the meteoric rise of the AfD?

Almost all opinion surveys identified the government’s open door policy towards migrants as the main cause for the shift to the right among voters. The influx of 1.2 million refugees in 2015 and 2016 especially from Syria. Afghanistan and Iraq caused significant concern across Germany. Merkel’s liberal approach of opening Germany’s borders to refugees in the autumn of 2015 encountered opposition and massive critique from various quarters within the political spectrum, including her own party, the media and citizens. In the evolving debate the AfD tactically jumped the bandwagon of public anti-immigration sentiments and seemingly offered answers to those who feared a dilution of German culture and values.

The AfD did particularly well in the eastern part of Germany – the former German Democratic Republic. Here, the party reached 22.5% coming second overall. For many East Germans the refugee crisis has become shorthand for an array of grievances. After 27 years of German reunification the two parts have still not fully grown together. Unemployment rates are substantially higher in the East and salaries and pensions remain below the levels in the West. Generally, income inequality has markedly increased in Germany since 2000, with the lowest earners having less money in their pockets than 15 years ago despite sustained economic growth. Furthermore some feel they are losing out from globalisation. Just as their neighbours in a good number of other European countries, in the United States and many other places in the world, this group favours more nationalistic politics and has used its power at the ballot box to teach the mainstream parties a lesson.

Holding the AfD at bay is currently not Merkel’s main concern, though. The election has resulted in the most fragmented Bumdestag since 1949. Seven parties will be represented in the new parliament increasing the difficulty in forming a coalition government. The Social Democrats who suffered their worst result (20.5%) ever since the founding of the Federal Republic of Germany, announced they would not renew the grand coalition with the CDU/CSU but head into opposition. This leaves Merkel only with one politically feasible option: a three-party alliance between the CDU/CSU, the liberal and pro-business Free Democratic Party (FDP) which won 10%, and the Greens (9%). This model has been tested at state level but never been tried in federal government. Given the fundamental ideological differences between the three parties on core policy agendas such as environment, education and energy, Merkel’s job will inevitably become more difficult. For example, the chancellor will be forced to tone down, if not abandon, any support of French president Emmanuel Macron’s ambitious EU reform agenda due to almost certain resistance within the probable new government.

In Germany’s other foreign relations continuity is likely to prevail as direction and conduct of foreign policy are largely uncontroversial. Foreign policy hardly featured in the campaign and the parties’ respective election manifestos did not include detailed positions on Germany’s international relations. Given the country’s dependence on global export markets and its role as a strong supporter of multilateralism in the world, it is surprising that even China as a rising power is only mentioned in passing in the parties’ strategy papers. However, the FDP’s pro-business agenda – provided that the party will indeed join the government – might strengthen Germany’s focus on Southeast Asia. German-ASEAN relations have intensified in recent years. Germany first appointed an ambassador to ASEAN in 2009. In 2016, Germany was conferred the status of Development Partner of ASEAN and the first meeting of the Partnership Committee took place last January. Germany has also been one of the most active EU member states in supporting the ASEAN Economic Community and regional integration in other areas through various programmes and projects. At the same time, Berlin’s Southeast Asia strategy dates back to 2002 and is in urgent need of an overhaul. In 2016, a high-ranking “ASEAN Expert Group”, comprising German government officials, former ambassadors to Southeast Asian countries, managers of some of the country’s leading companies and academics, presented a report in support of “strong economic partnerships between Germany and ASEAN”. The group recommended “a targeted intensification of relations with ASEAN” as a “promising way to connect to the new geo-economic block structures” and highlighted the “great urgency” of strengthened ties with ASEAN for the export-strong German economy. There seems to be a realistic chance that the new government will take these recommendations into consideration.