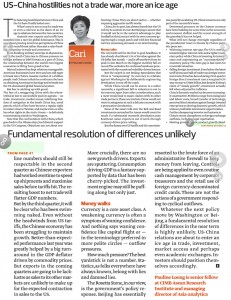 The festering hostilities between China and the United States have finally boiled over.

What’s next is not so much a trade war or even a cold war as the dawn of an Ice Age in relations between China and the United States.

Quarrels over exports and tariffs have morphed into a race for global dominance. This is now about growing American perceptions of China as an all-round threat rather than just a rules-bending competitor in trade and commerce.

From building military air strips in disputed areas in the South China Sea to Chinese pressure on foreign airlines to label Taiwan as a part of China, the relationship between the world’s two biggest economies is tilting from greed to fear.

Mutual interest had kept relations manageable. American businesses have been and are still eager to break into China’s massive market of 1.4 billion people. And Chinese industries continue to be keen on obtaining American technology and to break into the US-dominated global financial system.

But fear is catching up with greed.

The fear of a swaggering China with the wherewithal at last to successfully push its agenda – on trade, investment, market access, on redefining freedom of navigation in the South China Sea, on naval patrols which of late have become a regular sight in waters close to Taiwan, maybe even on who has what rights in the Arctic Ocean – is definitely concentrating minds in Washington.

Note that the confrontation with China, which goes back to the Obama days, has bilateral support in the US Congress. Objections are not about confronting China. Objections are about tactics – whether imposing aggressive tariffs work.

China for its part has always feared that the US will try to contain its rise. But Beijing is aware that it would not be to the nation’s advantage to play hardball at this juncture with its own economy going through a rough patch and with key financial metrics remaining stressed or are deteriorating.

The renminbi will be the first to grab headlines. It has already shed about 3.3% of its value against the dollar in June – and is off nearly 6% from its peak in late March in the biggest monthly fall on record. The outlook is for continued weakness punctuated by the occasional volatility-driven bounce.

But the culprit is not Beijing. Speculation that China is “weaponizing” its currency to retaliate against Washington by deliberately engineering devaluation is way off the mark.

While China would not be averse to a softer renminbi, a significant fall in valuation is not in its interests. Apart from other considerations, such a move would lead to major clashes with its other trade partners. These are markets China would not want to antagonise at such a delicate moment with a provocative devaluation.

None of the sweet talk over the Belt-Road investments earmarked for ASEAN would count for much if a substantial renminbi devaluation puts Southeast Asian exporters out of work through currency-driven price cutting.

But the drama over US tariffs and the uncertainties posed by escalating US-China tensions are only part of the renminbi’s woes.

Downward pressures on the Chinese currency have been building for some time as the economic environment shifted. And the recent strength of the greenback has not helped.

What will not change overnight regardless of the presidential tweet or threats by China’s patriotic press:

How much pressure? The best yardstick is not a number. Statistics, as folks everywhere have always known, belongs with lies and damned lies.

The Rosetta Stone, in our view, is the government’s policy response. Beijing has essentially resorted to the brute force of an administrative firewall to keep money from leaving. Controls are being applied to even routine cash management by corporate treasurers and to the retail use of foreign-currency denominated credit cards. These are not the actions of a government responding to cyclical outflows.

Whatever the next policy move by Washington or Beijing, a fundamental resolution of differences in the near term is highly unlikely. US China relations are about to enter an ice age in trade, investment, market access and perhaps even academic exchanges. Investors should position themselves accordingly.