Home / News & Views / Commentaries / Why all the talk of IR4.0 when so much of ASEAN is pre-industrial on an industrial scale? 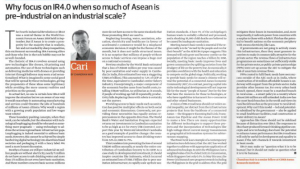 The “Fourth Industrial Revolution” or IR4.0 was a central theme in the World Economic Forum on ASEAN last September. But if ASEAN is to create a prosperity for the majority that is realistic, fair and not marked by sharp inequalities, this excitement surrounding IR4.0 amongst elites and those who live in the tech bubble may not be as well-founded.

The rhetoric of IR4.0 revolves around using new technologies like drones, 3D printing and automation. The use of these technologies such as delivering medicine with drones or providing internet through balloons, may seem a tad sensationalised. What is imagined is some social good that will be spread by these technologies, giving the proponents of these ideas some legitimacy while avoiding the more unsexy realities and priorities on the ground.

In actual fact, no one is certain how IR4.0 will improve the situation but we are aware of one way it would exacerbate it: automating manufacturing and services could threaten the jobs of hundreds of millions of ASEAN citizens. Why would a region with a growing youth population and low wages want robots?

These boundary-pushing concepts, when they work, can be valuable, but the obsession with technological leapfrogging should be refocused to something more pragmatic: using technology to address the serious regional basic infrastructure gaps. Leapfrogging is indeed essential to address basic needs. However, this cannot be achieved by simply hardwiring digital technology into disenfranchised societies and packaging it with a fancy label. We need a more honest discussion.

Swathes of ASEAN are still pre-industrial: 66 million people are without electricity1, nearly 71 million do not have access to safe drinking water, and more than 173 million don’t even have basic sanitation2. And these numbers concern basic access: millions more do not have access to the same standards that those promoting IR4.0 are used to.

Neglecting housing, water, sanitation, education, electricity and healthcare in favour of accelerated e-commerce would be a misplaced economic decision. It might be the flavour of the month, but it does not tackle structural issues. It is no surprise that millions of people without access to basic services can impose a huge cost on a national economy. Previous studies by the World Bank estimated that a loss of US$448 million per year was caused by poor sanitation and water supply in Cambodia3 (In India, this estimated loss was a staggering US$53.8 billion). This amounted to 7.2% of GDP at the time, equivalent to Cambodia’s entire fishery industry. Unsurprisingly, a major component of the economic burden came from health costs, totalling US$187 million. As utilitarian as it sounds, if people of working age fall ill repeatedly, productivity falls. Replacing them with robots is certainly not the answer.

Providing access to basic needs such as sanitation has positive multiplier effects on both social and economic dimensions. Conversely, not providing these necessities has equally serious repercussions in the opposite direction. The World Bank’s Water and Sanitation Program expected returns on investments in Cambodian sanitation to be as high as 2:1 for every US$1 invested4, and a report this year by WaterAid identified Cambodia as a good example of positive change5: the country has improved access to clean drinking water from 52% in 2000 to 75%. This translates to preventing the loss of around US$200 million annually, or nearly the entire contribution of Cambodian forestry to its GDP. As a case study in developmental investment, it should inspire countries like Indonesia, which incurred an estimated loss of US$6.3 billion due to poor sanitation infrastructure, to rapidly scale up their sanitation standards. A bare 5% of the archipelago’s human waste is suitably collected and processed, and a shocking 50 thousand child deaths are believed to be caused by inadequate sanitation.

Meeting ASEAN’s basic needs is essential if the region really is to be “owned by the people and run for their benefit” as the ADB IR4.0 paper suggests6. This demand will only grow and become costlier as the population of the region reaches a billion by 2050. Socially, meeting basic needs improves lives and grows communities by uplifting societies from the drudgery of life on the poverty line. Economically, it provides a workforce with the health and education to compete on the global stage. Politically, working to provide basic needs for ASEAN’s citizens will reveal the potential of a connected AEC. In contrast, pouring capital into niche technological developments will not improve life for the many “people of ASEAN”, but for the few that have the resources for these technologies, or who have capabilities to harness it for e-commerce and other related businesses.

A vision of IR4.0 readiness should not widen social inequality, nor distract from the infrastructure projects that form the backbone of a connected ASEAN; the Singapore-Kunming Rail Link, Trans-ASEAN Gas Pipeline, and the ASEAN Power Grid to name a few. There are many opportunities for different technologies to support these projects, and the incorporation of technologies like high-voltage direct current energy transmission or geographical information systems for subterranean mapping. The Power Grid is an example of a contemporary infrastructure deficiency that the AEC has worked together to address with appropriate application of advanced technology. In 2017, the Philippines lost a weighted value of 10.3% of electricity in transmission, whilst Singapore lost only 0.5%7. In May of this year, the Power Grid Summit saw progress towards including the Philippines in the grid to address this. The grid mitigates these losses in transmission, and, more importantly, it redirects power from countries with a surplus to those with a deficit. This has the potential to benefit nations on the economic periphery with excess electricity, like Laos.

If governments are not going to actively create this infrastructure, then they must generate incentives to make it commercially attractive for the private sector. The revenue flows of infrastructure programmes are sometimes not sufficiently stable for the private sector, so public-private partnerships (PPPs) were set up across the AEC to mitigate the risk of uncertain revenue flows. PPPs created to fulfil basic needs have seen success outside of the AEC such as in India, where construction of 50 million affordable houses is underway with support from the private sector. India provides other lessons too. For every urban bank branch opened, there must be a matched branch in rural areas: a smart policy in a country where almost 200 million are still unbanked. India now has the most bank branches in the world and views its rural bank branches as the precursor to rural development9.  Why can’t this model – led and potentially subsidised by the government – also be applied to small healthcare facilities, road construction, or water delivery in ASEAN?

Approaches like these should not be side-lined because of distraction over IR4.0. The responses to IR4.0 have produced forward-thinking pipeline concepts, and new technology does have the potential to enhance ASEAN performance. But IR4.0 readiness will only be useful for development and equality in ASEAN if the AEC channels it towards investment in basic needs.