ASEAN in the Digital Era: Opportunities and Challenges

It is humbling to realize that ASEAN has just commemorated its 50th anniversary. This half-century-long journey has reflected the dynamics of the cooperation among member states and the transformation process in the region. This cooperation has made ASEAN one of the most promising players on the global stage as the region remains stable with huge growth potential.

ASEAN is now the world’s sixth-largest economy with a combined GDP of US$2.55 trillion, and is expected to continue growing at a sustained growth rate of 5 percent, the average, over the past few decades. It is not surprising to see that in five years, ASEAN will enter the exclusive group of the five largest global economies.

ASEAN will need to tirelessly work on increasing its competitive advantages. ASEAN should capitalize on its advantage of being an attractive destination for investment and trade, to facilitate the creation and emergence of innovative businesses that incorporate digital technology. 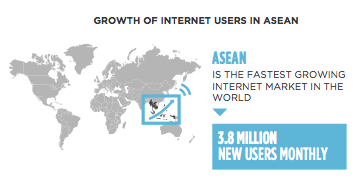 The Benefits of the Digital Economy
As home to more than 630 million people – the world’s third largest population – over 50 percent of which is under the age of 30 and is tech-savvy, ASEAN is the fastest growing internet market in the world. In fact, around 3.8 million new users come online every month in the region. In addition, ASEAN’s internet economy – which includes travel, e-commerce, and the media sector1 – is expected to reach US$200 billion by 20252. This provides ASEAN with the potential to boost its economy beyond the traditional sectors of investments and trade towards achieving the second phase of integration for the region as outlined in the ASEAN Economic Community Blueprint 2025. This new global megatrend of the digital age is a good momentum for ASEAN to strengthen economic performance as well as people’s prosperity within the region.

For an economist like myself, I am certain that the digital economy will contribute significantly to economic growth with increased economic efficiency and higher productivity through the greater utilization of assets, innovation, business networking, knowledge transfer and improved connectivity in value chains.

For an economist like myself, I am certain that the digital economy will contribute significantly to economic growth with increased economic efficiency and higher productivity through the greater utilization of assets, innovation, business networking, knowledge transfer and improved connectivity in value chains. This has also promoted an expansion of investment opportunities, created more trade, and greater access to products and services. In a more individual sphere, it also opens up opportunities for people to get involved in the economy as digital technologies allow people, especially women, to operate their businesses from home. People in ASEAN can also benefit from jobs created by young tech-savvy millennials. Regionally, it encourages economic activity to be further integrated as cross border data flows surge, connecting more countries, business and people.

The Challenges and Policy Options to Promote the Digital Economy
Nevertheless, like all countries and regions, ASEAN also faces challenges related to the impact of the digital age – also known as the Fourth Industrial Revolution – to governments, businesses and communities. Digital innovations have revolutionized the way in which businesses and the economy operate. This has big implications for jobs as workers are finding themselves with outdated skills and struggle to match the demands of these changing business models. Low-skilled workers are being replaced by machines – often called “automisation” – leading to political pressures. The digital economy raises the risk of inequality, especially if it is not accompanied by increased digital connectivity.

In line with the new roadmap of ASEAN 2025 “Forging Ahead Together”, ASEAN must be able to embrace new opportunities from digital technology but at the same time prepare measures to navigate risks it may bring with it to prevent anyone from being left behind. All Sectoral Working Groups will need to further leverage on digital trends, and integrate them into the various strategic action plans and future work programs with the aim to utilize digital technology for economic development and regional integration and cooperation.

Different stages of development among member nations including in the area of digital technologies are realities in the region. The challenge to ASEAN is to ensure that this “development gap” is well addressed. Therefore, there is a strong need for ASEAN to encourage intensive knowledge sharing and capacity building programs among member states to deepen understanding about the digital economy, its potential role in the region, as well as to collectively formulate strategic action plans in line with the ASEAN ICT Masterplan 2020. In addition, the creation of an integrated digital economy should also include enhancement of digital connectivity. An example is the optimization of the fiscal space by enabling investment via broadband and digital devices. Consultations and targeted measures to relevant stakeholders such as businesses, including micro, small and medium enterprises, and the community would be vital to bridge the digital gap as they are often at the forefront of these trends. Examples of key measures related to these stakeholders include expansion of financial access, promotion of cost-reducing technologies, and the development of financial services and intermediary facilities such as digital payment services.

Furthermore, government investment in education has to go beyond supporting traditional education to allocating budgets that include training on specific technology-related skills. In the formal education system, governments should focus on science, technology, engineering, and math (STEM) – as acknowledged by American, Australian and European governments – to improve compatibility of human capital with the digital era. Furthermore, research and development (R&D) is also a crucial part of technology development. ASEAN governments have to start increasing their R&D budgets to support research in their respective areas, considering the possibilities of innovation-led growth from successful R&D. While doing so, ASEAN governments need to continually conduct intensive knowledge sharing on strategies implemented to train human capital and to conduct R&D.

ASEAN governments are also expected to support a vast growing population of technopreneurs and e-commerce businesses. An example of such companies includes Indonesia’s start-up Go-Jek. Founded in 2010 as digital intermediaries for the ubiquitous motorcycle taxi in Indonesian cities, Go-Jek has expanded its operation into various services such as transportation, logistics, food and beverage, delivery, cleaning, beauty, and even financial services. Currently, it operates in 50 cities in Indonesia, with around 250,000 drivers having joined the business.

While deciding to spend more on the development of their digital economies, governments are primarily obliged to ensure fiscal prudence. The strategy then should be optimize revenues from the digital economy. Our global taxation systems are facing challenges to address the development of the digital economy. Consultation and cooperation with the digital intermediaries is needed to strengthen government capabilities to track and record digital transactions and further formulate credible tax policies for the digital economy. Another challenge would be how to encourage and further incentivize better tax compliance for digital economy businesses and suppliers. One way is to create systems that make it difficult for people to avoid paying their taxes – known as the digitalization of tax systems – while building taxpayers’ trust. This should also be supported by modernizing revenue administration and enhancing tax collectors’ performance by equipping them with the best IT tools, and enhancing safeguard measures against threats of digital fraud.

Indonesia is fully supportive of the digital economy. The Government recently launched economic policy package and issuance of E-commerce Road Map for the Year of 2017-2019. The roadmap covers the following agenda: (1) encourage the expansion of digital economic activities; (2) promote innovation; (3) provide ease of doing business in the use of e-commerce; (4) develop MSMEs and start-ups; (5) improve skills of human resources involved in e-commerce; as well as (6) build a desirable, integrated and safe digital environment.

In conclusion, I suggest ASEAN as well as individual member states to be well prepared in fulfilling the requirements needed for the digital era. These include relevant government policies in facilitating the emergence of the digital economy as one of main sources of the region’s growth. In the public policy spectrum, the requirements are, inter alia, creation of an environment which puts forward the principle of fair competitive business, promotes investment in digital infrastructure and digital education, and develops a supporting regulatory framework related to digital technology developments in order to establish an innovative, inclusive, secured and integrated digitally-connected region.

Sri Mulyani Indrawati is an Indonesian economist, who is serving as the Minister of Finance of Republic of Indonesia. She returned to this position after serving as the World Bank’s Managing Director and Chief Operating Officer. Sri Mulyani earned a Ph.D. and M.S. in economics from the University of Illinois, Urbana-Champaign, U.S.A.