ASEAN Primed for a Digital Future

Half a century into the ASEAN story, the growing importance of digital innovation will shape the next wave of economic development.

As the Association of Southeast Asian Nations (ASEAN) turns 50 this year, the economic strides that have made the regional bloc the world’s seventh-largest economy will set it up for sustained growth, increased prosperity and exciting prospects for the next half century.

Technology, and how it will continue to change the way people live, work, shop, dine, travel and save, is perhaps one of the most fascinating advances in recent times, and one that presents vast opportunities ahead.

China gives us a glimpse of the transformative power of online and mobile innovation in a young, increasingly affluent, and tech-savvy population. From a standing start in 2003, the country has become the largest e-commerce market in the world. Likewise, Tencent’s Wechat app, which launched as recently as 2011 and can now do everything from messaging to payments, now has 963 million regular users1.

True, neighbouring ASEAN, with its 10 member countries, is not China. The region spans a huge array of cultures, languages, and political systems. Levels of affluence, economic and infrastructure development, and internet and mobile penetration vary widely.

Still, the region holds some of the same potential that can already be witnessed in China.

Take a look at the sheer numbers. At 630 million or so, ASEAN’s population is less than that of Wechat’s user base. But 15 years from now, the region will have added another 120 million inhabitants2 – the equivalent of one-and-a-half Germany’s3.

ASEAN’s population is also one of the world’s youngest. For example, half of the population of the Philippines, and over 40 percent of Indonesians are under 25 years old4. 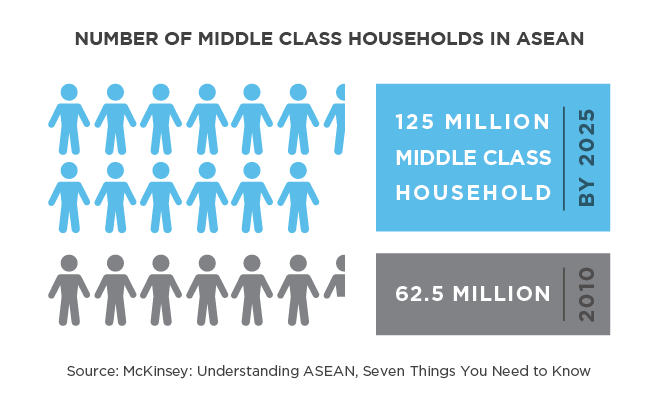 Meanwhile, disposable incomes are gradually rising in much of the region. ASEAN as a whole, will have some 125 million middle class households by 2025 – roughly double the number in 20105.

All this means is that for businesses, bankers and investors, ASEAN offers a large, dynamic and eager consumer base – and one they can tap and service increasingly easily via digital tools and mobile handsets.

Take internet penetration. Last year, only about 260 million ASEAN inhabitants were internet users – but that number is expected to soar to 480 million by 20206.

Similarly, in much of the region, cash-on-delivery, rather than digital payments, still dominates when it comes to paying for online purchases: an estimated three-quarters of transactions are still paid by cash7. And while Asia-Pacific, as a whole, accounted for 40 percent of global e-commerce sales in the first quarter of 2017, the vast majority of those sales went to China, Japan, Korea, Australia, and India rather than Southeast Asia8. But that leaves plenty of room for growth, and positions the region as the next frontier for e-commerce and digital payments.

Meanwhile, it is easy to see that ASEAN’s young consumers, just like their “millennial” counterparts in China, the U.S. or Europe, are highly likely to want to incorporate online and mobile innovation into multiple aspects of their lives.

As internet and mobile penetration pick up, they too will come to take for granted a world in which they can chat with friends online 24/7, and shop and access banking services (from remittances and payments, to foreign exchange and stocks, credit cards and personal loans) via their phones easily and securely around the clock.

It’s already clear that people in the region are receptive to digital tools. A recent HSBC survey found that four in five home buyers in Malaysia, for example, used online channels to research their recent property purchase, and over three-quarters went online for financing options9.

Amid all this change and potential, it is no wonder that ASEAN has begun to spawn a number of fintech companies. In Indonesia, for example, the highly popular Go-Jek platform has started to add digital payment functionality to its core transportation services. In Thailand, there is Omise – a payments platform that has already raised US$50 million in funding10.

Traditional banks are starting to invest significantly in their digital capabilities to offer a simpler, better, faster and more secure banking and payments experience. This includes working more and more with nimble fintech start-ups to ensure that their services meet the demands of a young, tech-savvy consumer base.

Meanwhile, some ASEAN governments are working to enable innovation. Singapore, for example, is leveraging its status as an established financial centre to take a leading role in fintech development, with support from the Monetary Authority of Singapore11.

ASEAN is on the cusp of an all-encompassing digital transformation, with technology promising to offer a new way of life and better experiences for consumers in this dynamic region.

ASEAN is on the cusp of an all-encompassing digital transformation, with technology promising to offer a new way of life and better experiences for consumers in this dynamic region.

The opportunities are numerous and ripe for the taking; the challenge is to be quick, bold and flexible to change.

Kevin Martin is Group General Manager and Regional Head of Retail Banking and Wealth Management, Asia-Pacific at HSBC. Based in Hong Kong, he is responsible for delivering the global RBWM strategy in Asia to continue to grow a sustainable business across the region.