ASEAN’s path into the Digital Age

The world is becoming interconnected at a phenomenal rate. Today, the world’s population stands at around 7.6 billion people and is reaching 9.8 million by 2050, as estimated by the UN. According to Gartner, there will be approximately 20.8 billion devices worldwide connected to the internet by 2020. These are not only the mobile devices and wearables that we have today, but also include sensors such as in cars or machines. What’s more, the cost of connecting a product will decrease drastically from US$4 to US$2.50 in 2015 to US$2 to US$1 in 2020, thereby fuelling the growth of connected devices.

ASEAN is in a prime position to leverage on such technological connectivity and harness its economic benefits. With a GDP of US$2.55 trillion for the full year of 2016, ASEAN is expected to hit US$2.6 trillion by end 2017 with an economic growth rate of 4.6 percent. This places ASEAN as one of the world’s biggest and most dynamic economic regions. If counted as a single entity, it would rank sixth only behind the United States, China, Japan, India and Germany. In addition, ASEAN is one of the fastest-growing internet regions in the world with over 480 million users by 2020. 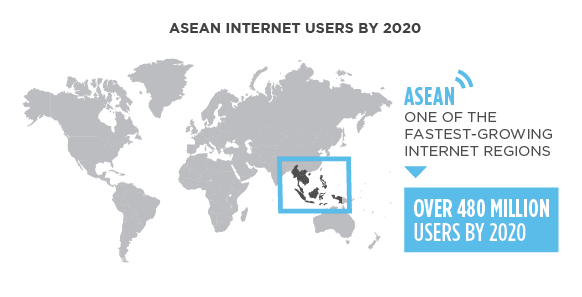 Most recently, the economy of ASEAN picked up the pace with a growth of five percent annually in Q2 of this year, according to an estimate of regional GDP compiled by FocusEconomics. This is ASEAN’s best performance since Q3 2013. Such a momentum is expected to continue in the coming years, as the largest economies in the region have pledged to increase infrastructure investment with over US$60 billion a year until 2020.

While infrastructure investment would lead to improvement in domestic and regional connectivity, it is the rapid adoption of new technology by ASEAN member countries that would be the biggest driver of economic growth and integration for decades to come.

However, digital transformation is not without its challenges, and these are the areas that require attention from ASEAN to reach its potential of fully leveraging such technology and advance in the digital age.

In a Volatile, Uncertain, Complex and Ambiguous (VUCA) world today, disruptive technologies are redefining business models and ruffling the feathers of existing players in the industry. Policymakers have to take on the challenge to keep track on the latest technology developments and consider legislative adjustments, facilitate the adoption of innovative solutions while mitigating the risks they potentially entail.

We are seeing rising customer expectations and requirements such as product customization, the availability of 24/7 service and shortened delivery times. New social behaviours are also emerging and becoming prevalent, such as online shopping, while new ecosystems are appearing and merging with existing ones. Take a car for example. Bosch first started making a car smart by installing automotive assistance systems that detect imminent collisions and help drivers brake ahead of time; or notify drivers if they veer away from their lanes and even steer the car back on track. Next, we add connectivity to the car – by today’s standards, this would be by way of the in-car navigation system, for example eCall – an emergency response system that helps saves lives by detecting that an accident has occurred, and dispatching emergency medical services automatically to the accident site. In the near future, the car as a product will be a part of a connected system where they will be able to communicate with one another via the internet to warn of hazards and obstacles on the road, as well as to detect vacant parking lots as they drive pass. And the next evolution would be that this system of cars is part of a larger system that comprises other sub-systems such as traffic information, environmental situations and GPS navigation – and this would be when autonomous driving will truly be available for everyone.

Adaptive leadership is needed to overcome challenges within an uncertain environment. Both business and political leaders should possess the knowledge and capability to be agile, adaptable and resilient.

Adaptive leadership is needed to overcome challenges within an uncertain environment. Both business and political leaders should possess the knowledge and capability to be agile, adaptable and resilient. The looming question is that while the private sector is embracing or spearheading new technologies, methods and business models, how are the local governments supporting business and economic growth, but yet ensuring fairness and a level-playing field in the industries?

Traditional markets are facing increasing competition from new entrants not only through vertical and horizontal integration, but also by means of disruptive technologies and services. To ensure that fair competition is upheld, governments must not foster any protectionist measures that purely serve the interests of specific sectors or companies. In ASEAN, an effective competition policy should entail enforceable rules that proscribe anti-competitive activities, so as to facilitate liberalization, as well as a unified market and production base within the region. Harmonized competition laws based on international best practices also need to be implemented in all ASEAN member states at the national level. At present, merger control will almost certainly form part of nine of the ten ASEAN competition law regimes. However, our suggestion is for all member states to have mandatory notification requirements – something that is not present at this point.

A digital economy transcends physical boundaries and borders. The responsible use and treatment of data forms the very basis of consumer trust that can also become a competitive advantage. Clear and precise regulations and legislation on how to treat data are required to ensure transparency and avoid ambiguity. For privacy reasons, certain national governments legislated that local data must also be hosted locally, with a tendency to build up even stricter data laws that may potentially restrict growth and progression for cloud platforms and other services. For non-personal data, or “inactive data”, clear rules are required to avoid legal uncertainty.

Cyber-attacks and cybercrimes are top concerns for companies and governments alike. No single IT system is 100 percent invulnerable. However, does that mean that we cut off access altogether, or embrace reality and invest in cybersecurity? With a rapidly evolving business landscape, companies will have to choose the latter path and with it, its ever-changing risks.ASEAN governments need to strengthen cooperation within the region in combatting cybercrimes as part of the 2025 blueprint for political security that will foster greater confidence by companies and consumers alike. For instance, ASEAN countries should adopt internationally-accepted encryption standards.

As respectable Professor Klaus Schwab, Founder and Executive Chairman of the World Economic Forum said in October last year, “In the future, it will not be the big fish that eat the small fish; it will be the fast fish that eat the slow fish.” I believe that the future that he’s referring to is already upon us.

It is true that ASEAN has the makings of a fast fish. However, even the fastest of fish slow down in the face of obstacles. The question is: do we allow such challenges to slow us down, or do we work together to overcome them? The potential is there, so let us come together and remain fast in the digital age.

Martin Hayes has helmed the business operations of Bosch in Southeast Asia as President and in Singapore as Managing Director since 2011. A founding member of the EU-ASEAN Business Council, Mr. Hayes is passionate about promoting shared business interests in ASEAN, especially in the areas of technology and innovation.