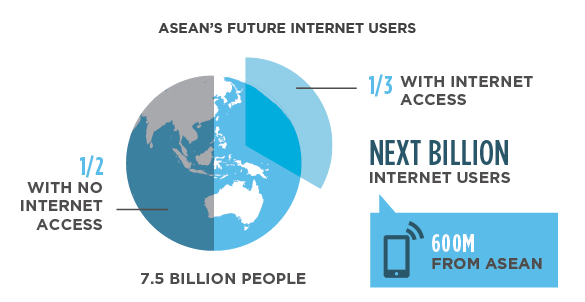 Would it surprise you to know that out of the 7.5 billion people in the world, more than half still do not have access to Internet – something one-third of the world takes for granted. Out of the next billion users of the Internet that are coming from this group of as-yet unconnected citizens of the world, 600 million are from the ASEAN region, and virtually all of them will become familiar with the Internet only via a smartphone. A device that didn’t exist just a decade ago!

At Google, we’ve been mindful of these ‘mobile first’ user behaviors for a while now as a company – the majority of whom reside in the Asia Pacific region. They, and the incoming billions of new users across Southeast Asia, South Asia, Latin America and Africa are part of a trend that is about to redefine the Internet: “building for billions.”

The people coming online through smartphones are using the Internet in radically new ways, and there is a massive potential for creativity and innovation in trying to help them solve their problems.

Building for billions means designing new technology for everyone from the very start of the design process. The people coming online through smartphones are using the Internet in radically new ways, and there is a massive potential for creativity and innovation in trying to help them solve their problems with the technology they have in their hands. The future of the Internet will be written by these people and more than ever, tech companies like Google that grew up during the Personal Computing boom need to focus on reshaping our apps, services, and platforms to work for the majority of the mobile first planet.

A decade ago the One Laptop Per Child initiative planned to build a US$100 laptop for every child on the planet. In recent years, smartphones look to be partially fulfilling that goal of making technology more accessible. Google’s Android mobile operating system alone powers two billion active devices. Smartphones, which now come cheaper than US$100, have more power than a laptop from ten years ago and millions of apps available for download.

We should not become complacent, however, that the spread of smartphones completely bridges the digital divide. The push for more affordable smartphones is far from over. There is a lot of potential to create cheaper phones that don’t sacrifice much quality. But when thinking about building for the billions who will use those phones, we need a second revolution to solve the next three major gaps: reliability of connection, data costs and relevant content.

At Google, we have a team called Next Billion Users who travel the world to hear about people’s Internet pain points and think up new solutions. Their experiences led them to build programs like Google Station, a model for improved connectivity that is already bringing millions of people high-quality Internet access at more than 100 Indian Railways stations. We have meanwhile adapted our Search, Chrome, YouTube, and Maps apps to work for users with unreliable or intermittent connectivity, through reducing data consumption or allowing content to be taken offline for later use. We invest into making more languages work on smartphones through open-source fonts, flexible keyboards, handwriting and voice inputs, so that people don’t have to learn English — or learn to type — just to use the Internet. And we are piloting new apps that serve new Internet users’ specific needs, including YouTube Go, an offline-first video app that works during low or no connectivity.

But the work of one company isn’t enough. The biggest change we can make is by empowering other developers and companies to solve these issues. There are three core lessons that Google’s learned over the last few years building for billions, and in sharing them we hope other app developers and startup entrepreneurs can more quickly reach the newest billion Internet users:

Reduce data required to use your apps. A third of global smartphones have less than 1 GB of storage, so apps need to be small. India’s Ola Cabs fixed the problem of heavy native apps by creating a Progressive Web App (PWA) — a lightweight mobile website that feels like an app.Their PWA is only 0.5MB and takes up just 50KB of data on its first payload and then 10 KB on subsequent loads. This greatly opens up the number of people in India who can call up an Ola cab.

Optimize for speed. For users on 2G, it can take 25 seconds to load a webpage and use 1MB of (very expensive) data. So in 2015 we started optimizing webpages for users on slow connections in Indonesia, India, and Brazil which load four times faster and use 80 percent fewer bytes. This did not just improve users’ experiences but publishers are getting 50 percent more traffic from these lighter web pages.

Speak multiple languages. In India, we found that people would switch between Hindi and English to figure out which language provided the best information. In response, we set up what we call “tabbed search,” which lets you quickly flip between the search results in each language. Given this option, users are searching 50 percent more.

While these concepts might seem simple, they’ve proven remarkably powerful as core design principles. And if you want to know more, we have more tips for designing for the new reality of the world’s Internet at developers.google.com/billions.

Today, there are 2.8 billion smartphone users globally, and there will be hundreds of millions more by the end of the year. The Internet is becoming truly global, and we believe that this will give developers from Southeast Asia, Africa and Latin America an unprecedented new canvas for their talent and entrepreneurialism. And as people come online for the first time, we must train more developers in those countries, since they are the closest to local users’ needs and can build apps that work best for them. And this is great for the globe. Building within the kinds of constraints the next billion users face gives developers a head start in the new rush to the wider trend of building for billions. Catering to the Internet’s next billion users is not just about expanding familiar tech to new places, but developing completely new things for the future.

Sajith Sivanandan is the Managing Director of Google Malaysia, Viet Nam, Philippines and New Emerging Markets where he oversees sales and business development operations as well as developing strategic plans in these countries. He was previously Head of Travel for Google Southeast Asia.