ASEAN turns fifty this year. This is something all Southeast Asians can be proud of. Besides the peace and stability the regional grouping has provided, the progress we have made through economic integration as well as political, security and socio-cultural cooperation is considerable.

Today, half a century on, ASEAN is the 6th largest economy in the world with a combined GDP of US$2.55 trillion. Since 1993, our average growth rate has been 4.7 percent with some ASEAN countries posting rates exceeding 6 percent. With a population of over 630 million people (65 percent of whom are below the age of 35), ASEAN is projected to rank as the fourth-largest economy in the world by the year 2050.

It has created a strong, growing middle-class currently at around 100 million, making ASEAN a very lucrative consumer market. Our total trade posted nearly a six-fold rise since the beginning of the ASEAN Free Trade Agreement – from US$430 billion in 1993 to US$2.55 trillion in 2016. Intra-ASEAN trade also surged by more than six-fold in the same period from US$82 billion to US$521.7 billion.

While these achievements are commendable, we must not lose sight of the challenges ahead – including coping with the digital age. This agenda cannot simply be at the periphery of the ASEAN Economic Community (AEC) framework, as it would leave potential unfulfilled. The digital economy could contribute towards making the regional economic integration, bigger, better and closer. 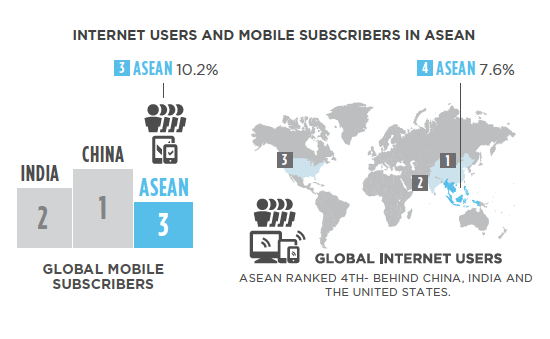 ASEAN has a strong potential to successfully embrace the digital age and ride on the wave of technology. As a grouping, ASEAN is ranked 3rd and has 10.2 percent global mobile subscribers, behind China and India. Meanwhile, 7.6 percent of global internet users are also from ASEAN, behind China, India and the United States.

The fact is clear – Southeast Asia is the world’s fastest growing internet region. According to Google, four million new users are expected to come online every month over the next three years, which could result in a user base of 480 million by 2020. It is not only large and growing, but it is also predominantly young (70 percent are below the age of 40) and increasing middle class.

This speaks volumes about the potential of internet consumers market, which could also contribute to boosting trade within the region.

Such potential can only be unlocked if we have necessary instruments in place, including the online transaction mechanism. We cannot turn a blind eye to the low penetration of payment mechanism – about 150 million adults under the age of 25 in ASEAN still do not have a bank account.

E-commerce must be the way forward and it is set to be among the key drivers that will reshape the landscape of global trade. It can only continue to thrive if there is seamless data flows. Currently, there is a trust deficit due to concerns surrounding data privacy and security, not only in ASEAN but also elsewhere.

A regional solution therefore is required to deal with this problem, as barriers to such data flows, be they within or between countries, will only hinder the adoption of the digital economy in ASEAN. An effective cooperation framework on this matter will certainly help boost the use of online payments options and drive the growth of online sales.

The growing consumer base in ASEAN will definitely provide numerous opportunities for Small and Medium Enterprises (SMEs) in the areas of digital economy. It is not rocket science that digitalisation will bring far-reaching impact on SMEs – it will allow them to access global markets for both customers and suppliers.

We want to ensure the benefits of regional economic integration will be inclusive, and thus SMEs will play an important role in ensuring that these benefits will trickle down to many.

As such, it is imperative for SMEs to continue developing their capabilities in transitioning themselves into the digital age. This will require an increased level of efficiency in their operations – cross-border trade must be quicker, easier and cheaper. Automation is definitely a must.

It is important therefore for policy makers to come up with regulations and incentives that would encourage SMEs to be part of this new reality. Disruptive technologies will pose a challenge to SMEs primarily since they will alter the way of doing business. However, if they are being managed properly, disruptive technologies could significantly lower costs for SMEs, which in turn will increase their profit levels.

Within ASEAN, Malaysia is set to be at the forefront of the digital economy and disruptive technologies with our effort to establish the Digital Free Trade Zone (DFTZ) – the first of its kind to promote cross border e-commerce.

A total of 1,500 local SMEs will be identified to be trained including through the Alibaba platform as we prepare them for this game-changer initiative.

The establishment of DFTZ is testament of Malaysia’s commitment to embrace the digital economy. By 2025, we foresee US$65 billion worth of goods will be moved through DFTZ. It will double the growth rate of exports among SMEs and create 60,000 jobs by the same year.

Our workforce needs to be ready to adapt to this changing landscape. They must be equipped with necessary skills not only to survive, but thrive in the digital age.

There is a consensus that coding will be the language of the future. ASEAN countries therefore need to ensure that these skills are being taught from the early age. We must prepare them for the jobs of the future, some of which may not even exist yet at this stage!

For Malaysia, we take cognisant of this new reality and therefore we will be introducing coding to the syllabuses of national schools. The preparation for this is currently underway and this is in line with the Malaysia Education Blueprint which calls for the encouraging of cognitive and higher order thinking, as well as embedding IT as a teaching and learning tool.

Indeed, the road ahead for ASEAN, including its embrace of the digital economy, will be long and arduous. Reforms—whether economic or administrative—are never easy. Moreover, we are faced with the challenge of evening out development, reducing inequality and forging consensus on difficult issues across our diverse region. And we need to continue pushing our envelope as we forge ahead into the era of digital age.

But I am confident that with closer cooperation, as well as mutual trust and respect, all challenges can be met even as global geopolitical and economic gravity shifts towards our side of the world.

ASEAN is now a reality, having evolved from a loose organisation to a permanent and stronger regional grouping. It has and will continue to deliver peace, stability and progress, as well as inclusive growth for everyone in the region.

Dato’ Sri Mustapa Mohamed is the Minister of International Trade and Industry. He was the first Malaysian to hold two Ministerial portfolios at the same time, in Entrepreneur Development and Finance. He has also served as the Minister of Higher Education and Agriculture and Agro-Based Industry.