ASEAN as a region is characterised by the diversity of its membership countries, with wide ranging levels of economic development and degrees of cultural influences, but deeply interconnected at the core.

Connectivity and telecommunications play a critical role in bridging this diversity, driving levels of connectedness across nations and further uplifting ASEAN economies as a key economic enabler.

The mobile segment (voice and data) is the major contributor to the ASEAN connectivity market. Mobile revenue represents more than two thirds of the revenue pools in all markets except Singapore, where only ~50% of revenue is from mobile. In total, the ASEAN mobile market generated ~US$12B in Q1 2013 alone, with positive growth momentum over the last three years (from 2.5% to 12.1% depending on country). 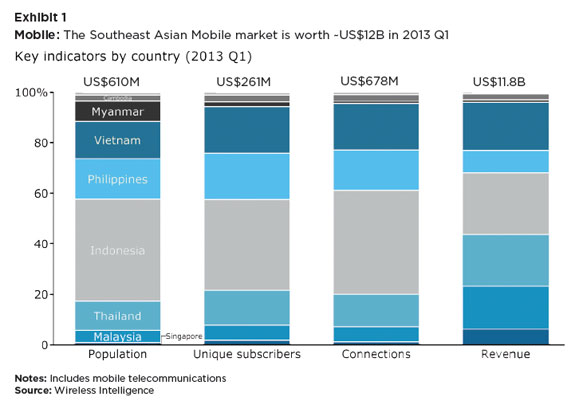 In the last three years, revenue growth has been driven by the increase in mobile penetration rates, which have now reached above 100% in all member countries. Conversely, the average revenue per user (ARPU) has declined in all countries except Thailand, where it has remained flat. 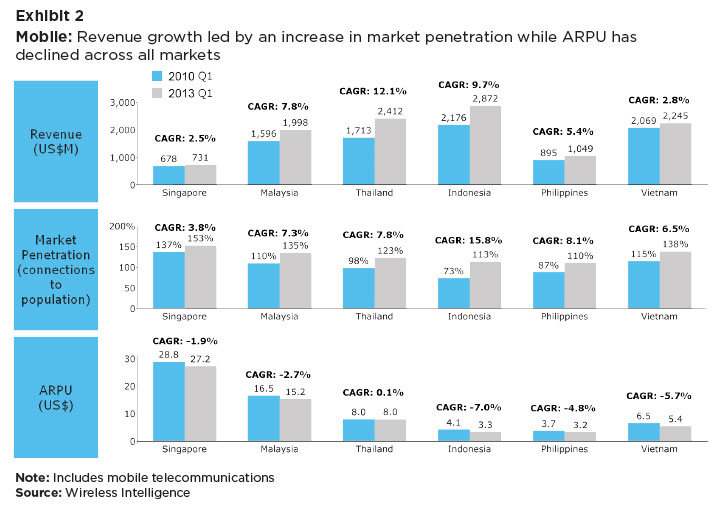 A few key drivers have contributed to the ARPU trends:

Not surprisingly, the decline in ARPU has been steeper in markets with higher pre-paid penetration, faster growth in connections to population ratio, and lower mobile data usage (Indonesia, Philippines and Vietnam). 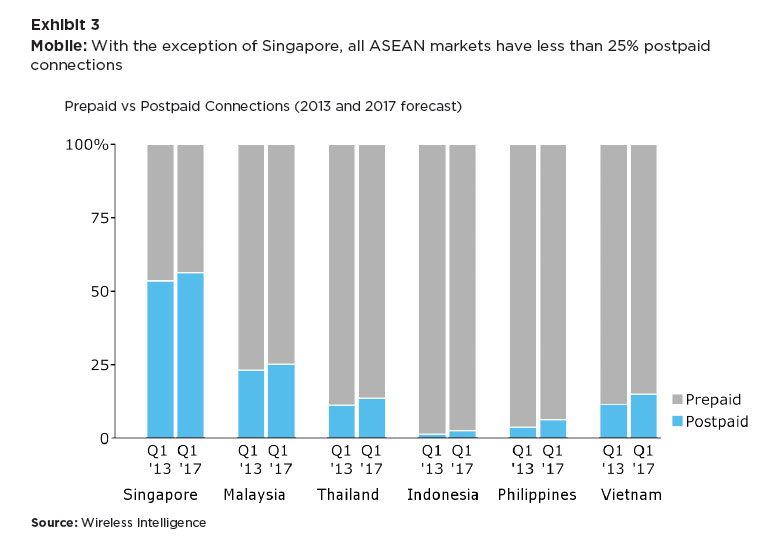 At the country level, the dynamics of the mobile market are very different due to different stages of maturity. Singapore is the most mature market in the region with a dominant post-paid component and ARPU approaching US$30/month, while neighboring Indonesia is dominated by prepaid and has much lower ARPU, hovering closer to US$3/month. Pre-paid is largely dominant (~75% or more in number of connections) in all countries except Singapore, leading to high churn rates.

Most mobile markets in the region are highly concentrated, often with a dominant incumbent and the top three players controlling more than 80% market share on connections. Most players are centered on their domestic market, with only Axiata, Singtel and Telenor playing in a variety of regional markets in ASEAN, predominantly through minority shareholdings.

A recent critical phenomenon in ASEAN is a strong shift to data on mobile (with many mobile-only/mobile-first internet users). This has happened on the back of strong 3G rollouts by operators in most markets and rapidly declining prices for high-end feature phones or low-end smartphones, meaning touchscreen devices can now be had for average selling price (ASP) at US$75 or less. 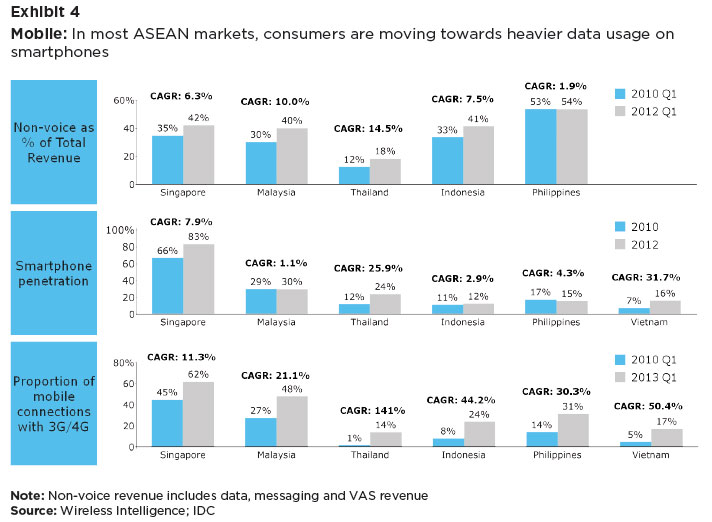 With increasing mobile data availability, today’s mobile communication options have gone beyond traditional phone calls and SMS to include Over-the-Top (OTT) services. These new options include email, voice/video over IP (e.g. Skype), status updates (e.g. Facebook, Twitter) and internet-based message services (e.g. Whatsapp, BBM, Line). All these OTT services rely on data access only and benefit users due to the asymmetric pricing for data vs. voice/SMS usage on mobile operator networks. So far, most of these services have been provided by global MNCs with few ASEAN telcos having the relevant scale to push locally controlled OTT services in the region successfully.

Fixed voice line (PSTN) penetration is on a continuously declining trend across ASEAN, driven by strong mobile adoption rates and, in many markets, limited legacy last-mile infrastructure to residential homes. 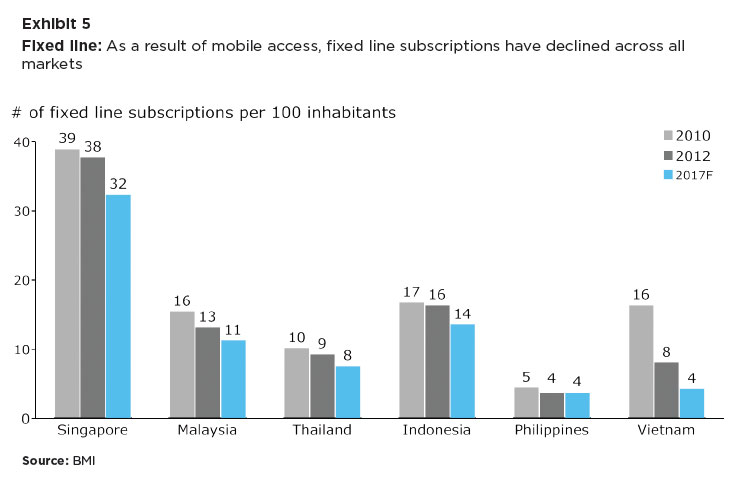 In contrast, broadband connection is expected to increase across the region albeit from a very low base. Many governments in ASEAN have realised the need for advanced fibre infrastructure to further create growth and drive a more knowledge-centric economy. For example, Singapore has implemented the Next Generation National Infocomm Infrastructure and Malaysia has started the National High-Speed Broadband (HSBB) Project, both of which aim to support increasing data usage. Indonesia is also pushing their National Broadband Network development for implementation until 2015. A further push on advanced Long Term Evolution (LTE) networks across ASEAN is likely to complement these efforts (with Singapore leading the charge on LTE rollouts).

Going forward, internet and data usage will continue to grow. However, many consumers will prefer mobile to fixed line access, driven by improved efficiency of mobile infrastructure. 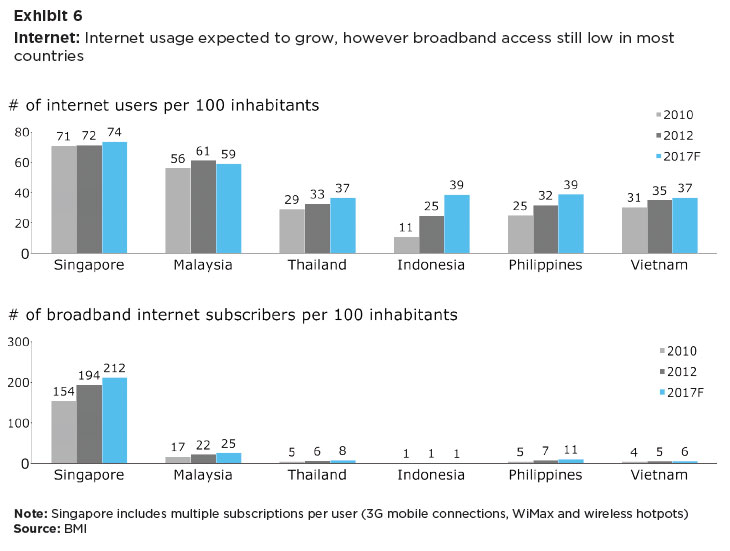 2. Recommendations for connectivity policies in ASEAN

As we have seen, the ASEAN communication market has been developing well; ASEAN citizens have been fast adopters of new technologies that improve their lifestyle. However, there are several areas where further regulation could help to reduce boundaries across ASEAN and drive further integration.  For this study, three have been prioritised: intra-ASEAN roaming and IDD, mobile advertising, mobile payments. In parallel, ASEAN regulators will have to retain a keen view on competitive intensity – managing price levels in markets while preserving local operators’ ability and scale to invest in next generation technologies.

However, relatively high roaming charges (both intra and extra ASEAN) and price variability are currently inhibiting adoption.  The segments which face the highest impact are particularly lower/middle-income migrant workers within ASEAN. Intra-ASEAN rates are still high compared to intra-European rates; among operators, regional companies such as Singtel, Axiata, and Telenor have started offering pan-regional roaming plans (e.g. daily “flat fee” data roaming charges with selected partner operators), but so far most efforts have been targeted at higher end business travellers.

Current charges are partially the result of a lack of holistic pricing regulation and the absence of a common regulatory body that can drive any pricing initiatives.

In the EU, regulations have played a key role in managing roaming costs and making markets more open to cross-border competition. Regulations were enforced in three steps between 2007 and 2011 (initially capping wholesale/retail voice charges, later followed by SMS charges and wholesale/retail data charges). While the regional push has yielded significant benefits in reduced charges and increased consumer adoption, telco profits have suffered significantly and the extent of the reduction is one factor blamed for the slow adoption of 4G services across Europe.

In ASEAN, even though multiple bi-lateral initiatives are in place to reduce roaming costs such as those between Brunei and Singapore or between Singapore and Malaysia, there is not any comprehensive “common ground” at the ASEAN level yet. ATRC (ASEAN Telecom Regulatory Council) has adopted an ‘Addendum ATRC Intra-ASEAN Mobile Roaming Rates’ aimed at reducing roaming charges, but it has not been equally used in all member countries.

Well-managed roaming rates are likely to have broad positive economic effects through the improvement of ASEAN-wide communications, while at the same time lower charges will not necessarily be detrimental to mobile operator profitability, due to demand elasticity. Moreover, guidelines on roaming rates can create a more level playing field for national-only carriers who are seeing increased competition from pan-regional players with attractive regional roaming propositions on their linked operators.

Devising a new regional framework to address high roaming and IDD charges is crucial to develop connectivity in the region, but entails a fine balance between multiple competing forces:

Taking future roaming rate evolution in a joint public/private dialogue across ASEAN appears to be the best path forward to address the many competing interests — this will enable continued improvements in connectivity across ASEAN and ultimately strengthen ASEAN operators, if done right. 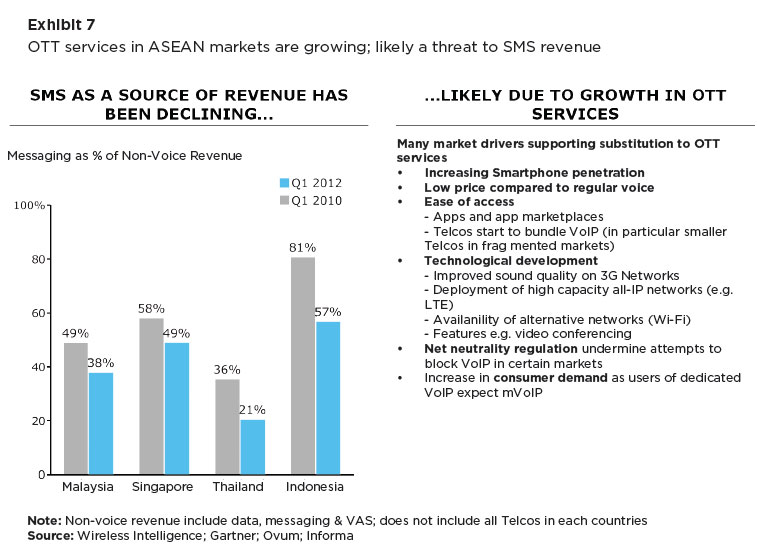 As seen in Exhibit 4 earlier, ownership of smartphones has reached 83% in Singapore, 30% in Malaysia, and has been growing strongly in all other countries, and this dynamic is likely to continue, driven by the increase in disposable income and the availability of more affordable smartphones at lower ASPs.

On the other hand, mobile advertising is still in the early stages in ASEAN. Out of the total spending on internet advertising, only 7% is in mobile, whereas mobile already accounts for ~18% of total internet traffic and this share is likely to increase because the growth in broadband connections is slower than the growth in mobile data connections (Exhibit 8).

This under-investment, combined with accelerating adoption of smartphones, points to a sharp increase in mobile advertising in the next 5 years. Analysts expect mobile advertising spending CAGR to be from ~20% up to ~40% until 2017. 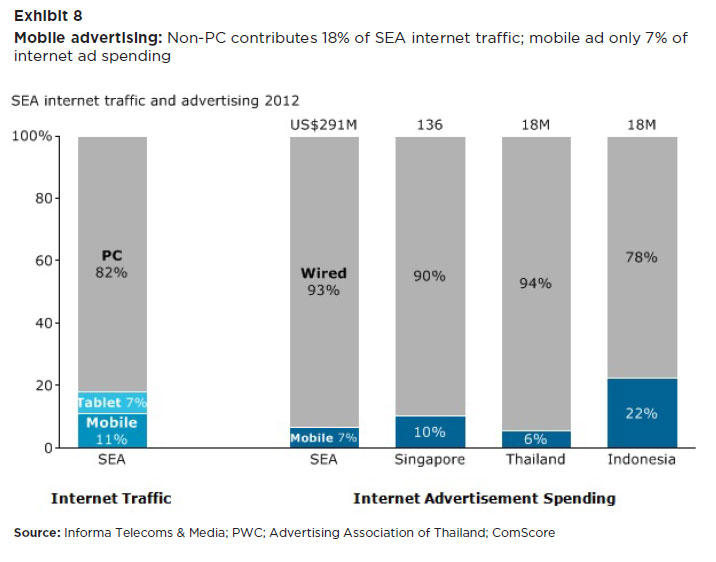 With this in mind, regulators can play a pivotal role in encouraging and orchestrating this market by focusing on three important initiatives:

Mobile payments are an emerging trend with potential to create added value for consumers, telco operators, the financial services sector and merchants across the region.

In ASEAN, a significant portion of the population is still not served by the formal financial sector, as shown in Exhibit 9. While the share of banked population has been growing only slightly in the past few years, the number of mobile subscribers has increased sharply, creating an opportunity to serve via the mobile channel customers not reached by traditional financial services (Exhibit 10). 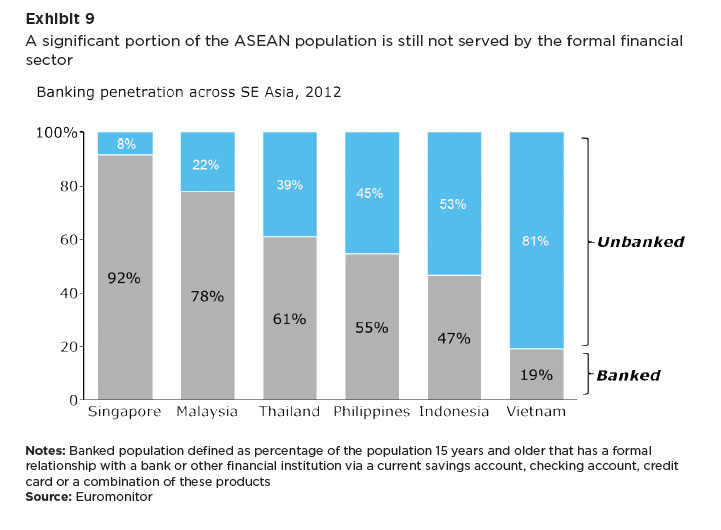 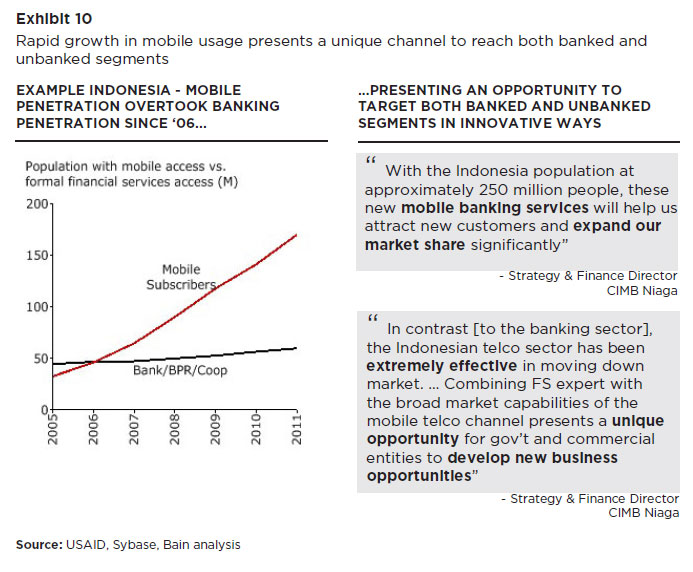 Opportunities in mobile money are along three categories of usage:

Experience from credit cards and debit cards shows that scale adoption of new payment channels can take up to about 20-30 years. In ASEAN, the current adoption of mobile financial services is still in early stages, but most operators have launched initiatives in this space.

A healthy ecosystem is the key to unlock the mobile payment opportunity. However, this requires a flexible but clear regulatory framework that assigns roles to each player, and a strong government commitment ensuring players can justify the investment needed:

Regulators can help foster the development of mobile payment services in ASEAN by:

Maintaining competition in ASEAN is crucial for a healthy development of the connectivity market. Currently, markets in ASEAN are concentrated, with fierce competition both among operators (notably in pre-paid) and between telco operators and OTTs. However:

A comprehensive look at competitive dynamics in the connectivity market should encompass a few aspects.

ASEAN has a healthy connectivity market with headroom for growth over the next few years, but is facing similar transitions as developed markets. Regulators can definitely play a role to further maintain a healthy competitive environment, stimulate growth and deployment of new infrastructure and services, thereby enhancing connectivity and integration across ASEAN and learning from the evolution in more advanced markets.

There are three specific areas where regulatory action can be most effective in the near future.

Finally, maintaining healthy levels of competition is instrumental to connectivity growth. Regulators will need to retain a keen eye on dynamics in their respective marketplace and trends emerging across the region.  Ensuring a strong future evolution for connectivity across ASEAN should involve an open dialogue and cooperation among regulators and private industries. NAF and similar platforms can offer a basis to collect input for policy making and to keep a finger on the pulse of the ASEAN connectivity market.