The Association of Southeast Asian Nations (ASEAN) has a deadline by end of 2015 to achieve regional economic integration under the ASEAN Economic Community (AEC).

The development of the AEC is of great interest to policy makers and businesses within the ASEAN region as it could provide significant benefits for the region and boost its economic growth. Elements of the AEC include the development of a single market region with free flow trading of goods, services, investment and transfer of skilled labour, becoming a competitive economic region and achieving integration into the global economy.

A number of reports have explored and compared the key factors contributing to the overall success on the implementation of the AEC. Among them are the laws that govern the region. It has been said that the harmonisation of legal rules is the way forward as it can help to remove uncertainty, reduce cost, generate greater business confidence, and ultimately advance ASEAN community-building goals.

There is no doubt that an effective legal framework is essential and good governance is absolutely necessary for economic development that is inclusive and sustainable. In reality, harmonisation is difficult as member states have to agree to policies which incorporate or reconcile a number of constituents or stakeholders. Further, harmonisation of ASEAN’s legal framework faces great barriers due to the disparity that exist between the economic development and social cultural status of ASEAN countries.

While the ASEAN members are embracing the importance of legal harmonisation within the region, efforts have been slow in adopting binding legal frameworks to govern the relationships between them. At present, there seems to be a preference in operating on an ad hoc basis of understanding and informal agreements. Regulations set by the governments within the region fall short of being clear, straightforward and transparent, and do not provide predictability in the application and enforcement of rules, nor facilitate citizen participation in governance.

As the deadline is fast approaching, ASEAN must have a stronger commitment to realise legal harmonisation. The private sector’s involvement is critical at this stage.

We have analysed some of the barriers and we believe it is essential for ASEAN policymakers and stakeholders to address them as soon as possible to support the overall AEC goals.

2.    Current Status of the Legal System in ASEAN

Integration of trade in services is one of the key initiatives needed to achieve the AEC. In 1995, ASEAN members signed the ASEAN Framework Agreement on Services (AFAS), mandating progressive negotiations on the liberalisation of trade in services. This was in recognition that intra-ASEAN economic cooperation will strengthen and enhance trade and investment among the ASEAN countries. Over the years, ASEAN has been pushing for liberalisation of its legal services as part of an effort to facilitate legal harmonisation.

Generally, legal harmonisation is based on the premise that “standardization would accelerate the process of legal convergence…reducing transaction costs for transnational investors and increasing the quality of legal institutions in countries whose institutions are less developed”.1 Standardisation is usually done through various ways. It can begin with central determination and control of data definitions, formats, and attributes followed by identifying common principles and practices and eliminating overlaps and redundancy. Observers have claimed that legal harmonisation could cut transaction costs and therefore foster international trade.

However, there are certain prerequisites that are required for an effective legal harmonisation system. To effectively undertake harmonisation in its legal services, a country should already have a fairly developed and well-functioning legal infrastructure in place. In addition, the existing legal infrastructure should be able to support its new implementation as intended. One cannot expect to have the intended result from the process of legal harmonisation just by the introduction of a new transplanted law or regulation. The process involves full understanding and co-operative measures from legal practitioners and bureaucrats who are part of the legal infrastructure of a nation, as harmonisation may possibly result in laws which are “lost in translation”. Moreover, apart from sharing the same level of legal infrastructure development, countries should ideally have similar levels of socio-economic development. It is not uncommon for countries to reject the idea of harmonisation in a situation where the basic needs of the nation are not even met or appear to be distinctly different from other countries.

Unfortunately, ASEAN does not meet any of the above-mentioned criteria. Not all of its member states have a developed, well-functioning legal infrastructure in place and certainly their levels of socio-economic development are not equal. Harmonisation may indeed be difficult for ASEAN as it needs to please a number of constituents and stakeholders within the region. Ideal legislation cannot be achieved because there are different users of law, each of whom may have different expectations. For ASEAN to achieve full legal harmonisation, good policies must be successful at reconciling those various points of view. 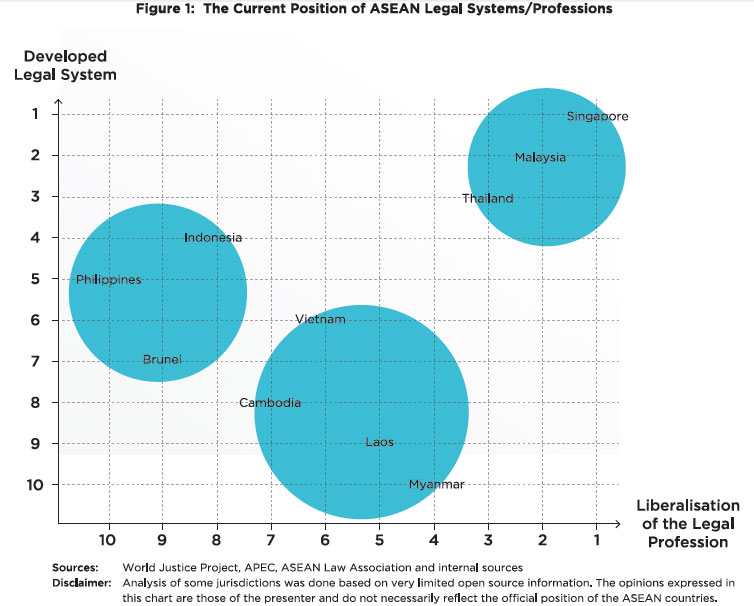 Unlike the European Union (EU), ASEAN laws are far from being harmonised. Figure 1 shows countries in the ASEAN region at different stages of legal development. Broadly, the legal systems in ASEAN were analysed based on two factors of development:

Only a few of these countries have taken action to implement policies to regulate and enforce liberalisation of the legal services. For the purposes of our assessment, we have given greater weight to countries that have made concerted efforts to liberalise their legal professions. In evaluating what constitutes a “Developed Legal System”, we have used a combination of quantitative and qualitative data relating to civil justice (including the existence of impartial and effective Alternative Dispute Resolutions (ADRs) ), criminal justice, regulatory enforcement, protection of commercial contracts and IP rights, and absence of corruption in the judiciary, amongst others.

Based on the assessment, we can conclude that none of the member states of ASEAN possessed the same level of legal development and they are also at different stages in liberalising its legal services. 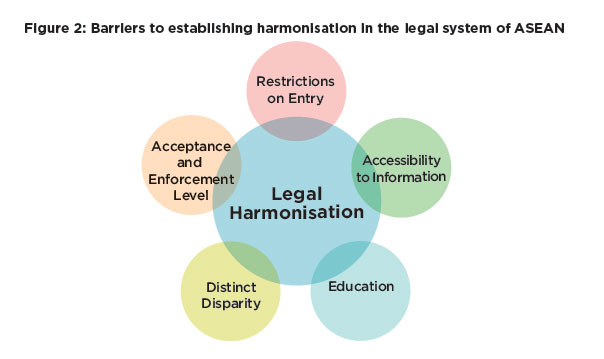 Creating a “level playing field” is a long term process which will involve time and a lot of efforts from each member state involved. However, the process is critical in order to achieve ASEAN legal harmonisation. This includes simplification, standardisation and harmonisation of laws, standards and policies governing the member states.

Meanwhile, in order to succeed in the short term, ASEAN should focus on the low-hanging fruits.

Some of these recommendations were proposed during the round table discussion:

Come 1 January 2016, the implementation of the AEC will most likely not fully accomplished and will remain an ongoing project. The direction and commitment towards the AEC appears to be irreversible. The deadline merely functions as a push-factor to get all relevant parties started and be committed to a certain timeline.

Despite all the recommendations that were shared during the round table discussion, we note that there has been quite a number of non-governmental organisations formed that also share the same collaborative efforts to understand and harmonise the laws in the region. However, we also find that these organisations become inactive in their efforts gradually. It is important to ensure that all ASEAN institutions formed for this purpose remain active and constantly in charge of monitoring ASEAN standardisation and the progress of harmonisation of laws within the region.

To what extent full legal harmonisation can be implemented depends on the political will of each member state in ASEAN. It also depends on the national political support of adopting those laws and policies. Depending on how well-drafted a law or regulation may or may not be, not forgetting whose interests it is defending, it will have an impact on how such transplanted or harmonised legal product is enforced in practice. In the final analysis, such enforcement will determine the effectiveness of any legal harmonisation product.