Financial and capital markets play a crucial role in facilitating trade and investment growth, and ultimately in catalysing and driving economic progress. Recognising this, one of the fundamental objectives of the ASEAN Economic Community (AEC) 2015 Blueprint is to develop an efficient and integrated regional financial system through liberalisation of financial services and capital account, harmonisation of the payments and settlements systems, and a host of other initiatives such as capacity building, regional financing arrangements, regional surveillance and policy dialogues.

In the years since AEC inception leading up to this milestone year 2015, steady albeit slow progress has been made towards a more integrated ASEAN financial system.

However, this should not preclude ASEAN as a collective from exploring other alternatives to further enhance efficiency and strengthen integration of the regional financial system. In last year’s (2014) Lifting the Barriers (LTB) Report and ABC Forum, we explored various policy and industry led initiatives, leading to a recommendation for a Financial Services and Capital Markets Expert Group submitted to ASEAN leaders.

In this year’s paper, we intend to focus on exploring the industry led theme further by examining capital markets infrastructure, alternative financing such as peer to peer models to meet underserved ASEAN SME financing needs and the possibilities for more efficient regional payments arising from the new age digital technology developments.

2. RECAP: WHY IS AN EFFICIENT AND INTEGRATED FINANCIAL AND CAPITAL MARKET IMPORTANT?

Beyond the benefits that it brings, an integrated and efficient financial and capital market is also essential to effectively foster and grow a vibrant SME segment – a crucial engine of growth in emerging economies.

Despite being an important driver for job creation and economic growth, large swathes of ASEAN SME businesses still struggle to access adequate funding. As shown in Figure 1, conditions for SME access to financing in the majority of ASEAN countries is still less than ideal and in many cases lacking. 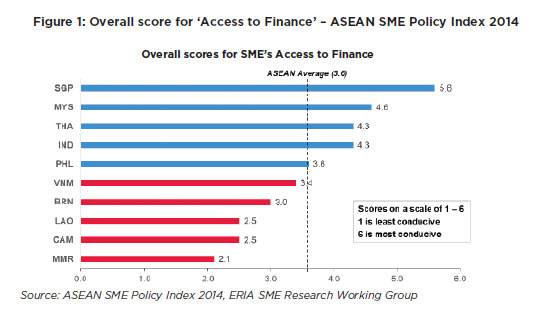 The AEC recognises the development of SMEs, including access to finance, as fundamental to achieving the ASEAN community’s goals and is in the midst of implementing a strategic plan to develop a thriving SME segment.

However beyond addressing the fundamental framework, legal, institutional, capability and infrastructure issues affecting SME access to finance, there is growing recognition that alternative sources of financing could go a long way towards furthering the goals of SME development, for example the ASEAN SME Policy Index 2014 recommends “promotion of innovative and alternative finances such as channeling through domestic and regional networks of equity fund, venture capital finance, angel capitalists, and Crowdfunding platforms for SMEs” as a means to address the SME financing gap.

In last year’s (2014) LTB Report, we examined a two-pronged approach to address the efficiency and integration of ASEAN financial and capital markets – involving policy makers on the one hand and the financial services business community on the other. Several ideas were examined in detail including industry utilities, setting up of a Pan-ASEAN “growth” bank and internet financial services. 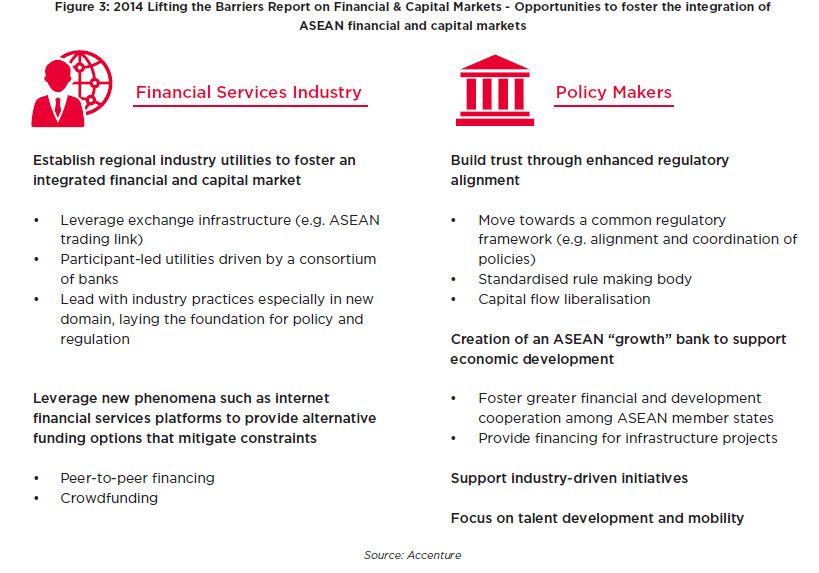 Unlike policy initiatives, industry-led initiatives have the potential to drive change at a nimbler pace, incorporate latest leading practices, market developments and technology. In this year’s LTB paper, we will explore the industry-led theme further and expand on some of last year’s ideas.

The ATL is a B2B arrangement where participating exchanges are interconnected through an electronic network for cross border trading and order routing. ATL is an initiative driven by the ASEAN Exchanges – a collaboration of 7 stock exchanges within ASEAN – with the objective of promoting ASEAN financial market growth through freer flow of capital. With the ATL, brokers of participating stock exchanges have access to trading infrastructure to deal in shares listed on other participating stock exchanges, even if they do not have a trading license to operate in that particular jurisdiction. In effect, investors in each participating country now had easier and more seamless access into other ASEAN markets from a single access point.

The ATL was operationalised in September 2012 with three participants, namely the Singapore Exchange, Bursa Malaysia and the Stock Exchange of Thailand. Collectively, these three stock exchanges offered nearly 2,300 listed companies with a market capitalisation of US$1.4 trillion, i.e. 70% of the total ASEAN market capitalisation at the time of launch1. Other ASEAN stock exchanges were anticipated to join in subsequent stages, although the timing is a function of the varying capital markets maturity in each country.

Establishment of the ATL was an important first step in establishing an integrated regional capital market. To further strengthen the linkages between the region’s capital markets, it is recommended to embark upon the Phase 2 and Phase 3 activities involving the ASEAN depository link and ASEAN clearing link2 – at a minimum involving Malaysia, Singapore and Thailand as pioneers, to deepen regional post-trade linkages and in doing so, drive further market integration, better risk management and boosting market growth.

There are currently no infrastructure linkages between the central securities depositories (CSDs) and central clearing counterparties (CCPs) across ASEAN. Post-trade processing is fully within national boundaries, with clearing and settlement processes for cross border trade executed in the security’s country of issuance. 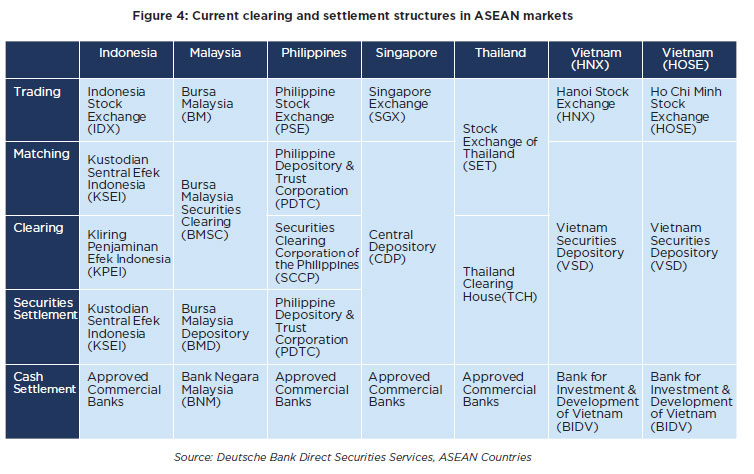 Regional clearing links would enable a broker to manage a single account for margin and collateral across all markets from a single clearing membership, resulting in greater efficiency and reduced costs to trade regionally. Linkages between CCPs can take the form of either a single Pan-ASEAN entity across the different markets, CCPs with interoperability across markets or cross-CCP memberships where each CCP acts as a clearing member for each other. While a single Pan-ASEAN CCP would have the clearest benefits in terms of efficiency, costs and regional risk management, it would also have the most legal, regulatory and technological barriers to contend with. With the divergent regulations and practices in the different ASEAN markets, CCP interoperability would have similarly difficult challenges to overcome. The third option of cross-CCP memberships is likely to be the most feasible option to achieve clearing linkages.

Regional depository links would enable investors in one country to purchase and settle shares in the other markets through their domestic broker and hold them in their domestic account, thereby reducing transaction time, lowering overall costs and settlement risks. Similar to CCPs, regional depository linkages could take the form of a single Pan-ASEAN CSD entity which would likewise face the same legal, regulatory and technological barriers to implement. A more feasible alternative could be for a CSD to CSD correspondent account relationship, where CSDs would open securities settlement accounts with each other, and each CSD acts as an agent for the others by maintaining records for tracking of investors’ foreign assets. The success of such a depository linkage model would rest on having the appropriate integration technology in place.

In implementing more integrated regional post-trade processing, ASEAN can look to the European Union (EU) for insights. Beyond the ATL, the ASEAN clearing and depository link would be the strategic stepping stones towards an integrated ASEAN capital market.

Peer to Peer (P2P) financing models have been around for more than a decade. Beginning from its roots in the retail segment, in the US, Europe and certain parts of Asia these alternative sources of financing have matured considerably and are increasingly gaining acceptance as a viable source of funding for smaller or less established firms. In addition to meeting the financing needs of SMEs at lower costs, these web-based models also leverage the inherent ‘anytime, anywhere’ nature of the internet to efficiently match surplus savings with capital needs by offering alternative investment options to a wide pool of investors.

P2P platforms have shown success in helping to meet the financing needs of SMEs in the US, Europe and Asia. Figure 5 provides some examples. Across these geographies, regulators are either in the process or have issued rules on P2P financing. For example, as at March 2015 China Banking Regulatory Commission (CBRC) is in the process of reviewing draft P2P rules, while the UK implemented P2P regulations in 2014. 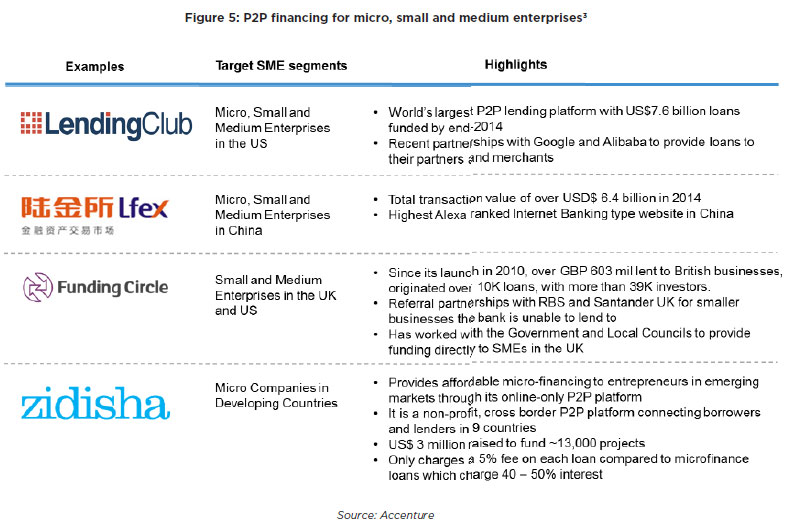 Crowdfunding, being one form of P2P funding, generally falls into two categories – rewards based or equity based. The rewards based model entails non-monetary payback (examples include Kickstarter and Indiegogo) whereas investors in an equity based model receive unlisted shares. While still small relative to size of traditional financial and capital markets, use of equity crowdfunding to raise capital for businesses is gaining traction with successful platforms such as Crowdcube and Seedrs in the UK, both of which are regulated by the UK Financial Conduct Authority. 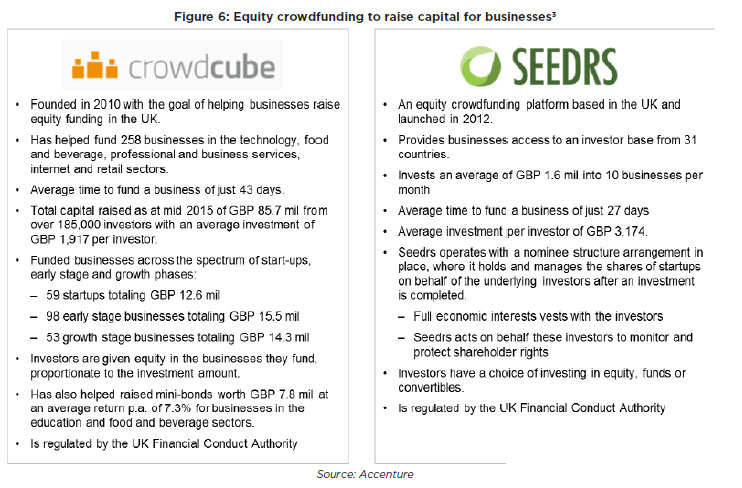 Reflecting the growing recognition of these alternative financing models, various ASEAN regulators are also taking steps to regulate crowdfunding and P2P financing. Progress on the ASEAN regulatory front is an encouraging development and is an important step in establishing a conducive environment for alternative financing models to flourish. Already, six crowdfunding platforms – Alix Global, Ata Plus, Crowdonomic, Eureeca, PitchIN and Propellar Crowd+ – have secured approval to operate in Malaysia where regulations have been finalised and a number of P2P financing platforms such as CapitalMatch and FundedHere have announced their launch in Singapore in anticipation of the finalisation of regulations. 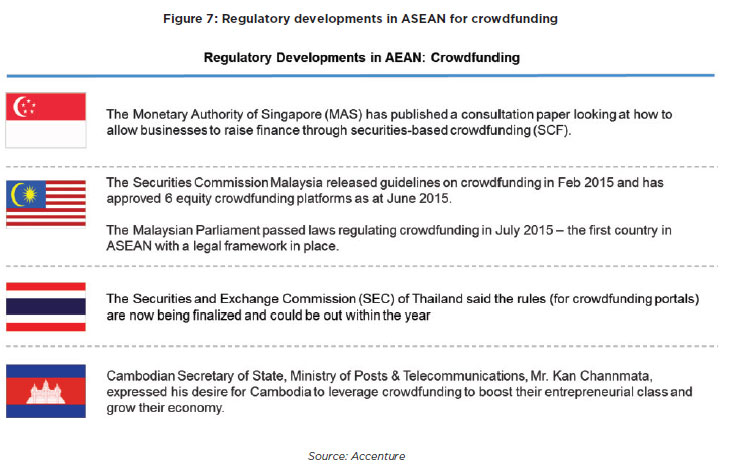 While it is early days for crowdfunding and P2P financing in ASEAN, regulators and industry participants alike should keep a close watch on developments in these alternative models, given its vast potential leveraging the internet’s reach to efficiently connect investors and enterprises in need of financing. Crowdfunding may be more viable in ASEAN in the medium term based on regulatory developments todate, with other P2P financing models a longer term consideration.

In tandem with creating an ASEAN-wide capital market infrastructure, there is also tremendous benefits in forging region-wide payment infrastructure, specifically in addressing the currently rather inefficient crossborder currency exchange and remittance network. One potential solution could be to leverage nascent distributed cryptographic transaction capability, increasingly commonly deployed on the Internet, for instance blockchain-based payment infrastructure or Ripple system.

Ripple is a payment system, currency exchange and remittance network by Ripple Labs where users make cryptographically signed transactions. It is an Internet Protocol (IP) based technology for financial institutions to clear and settle transactions in real-time via a distributed network. Ripple is built around a distributed public ledger that records transactions and account balances. Financial institutions can use Ripple as a common ledger to clear and settle transactions in real-time at the lowest possible cost. Ripple structurally alters the payment process by enabling:

A number of US banks have already signed on to adopt Ripple’s open-source distributed transaction infrastructure, while global and regional banks such as RBS, Commonwealth Bank, Westpac and ANZ have started testing the technology.

No doubt this technology is still in its infancy and would require more years to develop and mature. But it is worthwhile for the ASEAN community to keep abreast as its application has the potential to transform the payments landscape for the benefit all market participants, especially SMEs, and further tighten the integration and efficiency of ASEAN financial and capital markets.

Much progress has been made leading up to this milestone year 2015 but the challenges of pulling along diverse ASEAN markets on the path to integration will remain for some time. The more developed markets have a key role to play in forging the way ahead by laying the foundation for a more integrated and efficient ASEAN financial and capital market. Faced with differing local regulations, environment and operating contexts, policy led integration initiatives are likely to continue slow progress, even between the more developed markets but industry-led initiatives have the potential to accelerate evolution towards an integrated ASEAN market. This paper explored 3 such initiatives:

In conclusion, while policy initiatives provide the foundation and framework, truly advancing ASEAN financial and capital markets integration and forging a robust, dynamic regional market would ultimately hinge on all industry participants heeding the call to action.