How conceivable is aspiration 2030?

Southeast Asia is expected to be one of the world’s fastest growing consumer markets over the next decade, with ASEAN members’ GDP forecasted to rise to US$10 trillion by 2030.1 The International Labour Organization (ILO) projected that ASEAN would see the second-largest labour force growth by 2030 (behind India); with the entry of some 59 million people to the workforce.

The question then arises as to what do current developments reveal about the nature of the “gap” between the vulnerabilities identified in the previous section and this vision.

As ASEAN pushes past 50 years, the option for ASEAN—especially the ASEAN-5—to be a low-cost, mass manufacturing merchandise producer is increasingly a distant past. Demographic trends present challenges. On the one hand, 60% of ASEAN’s population is under 35 along with a growing sizable middle class and educated workforce.

On the one hand, 60% of ASEAN’s population is under 35 along with a growing sizable middle class and educated workforce. On the other hand, it has been observed that some key working populations are “ageing” as birth rates decline and better healthcare increases life expectancy. The number of people who are 65 years or older are forecasted to more than triple by 2050 (Figure 7.1).3 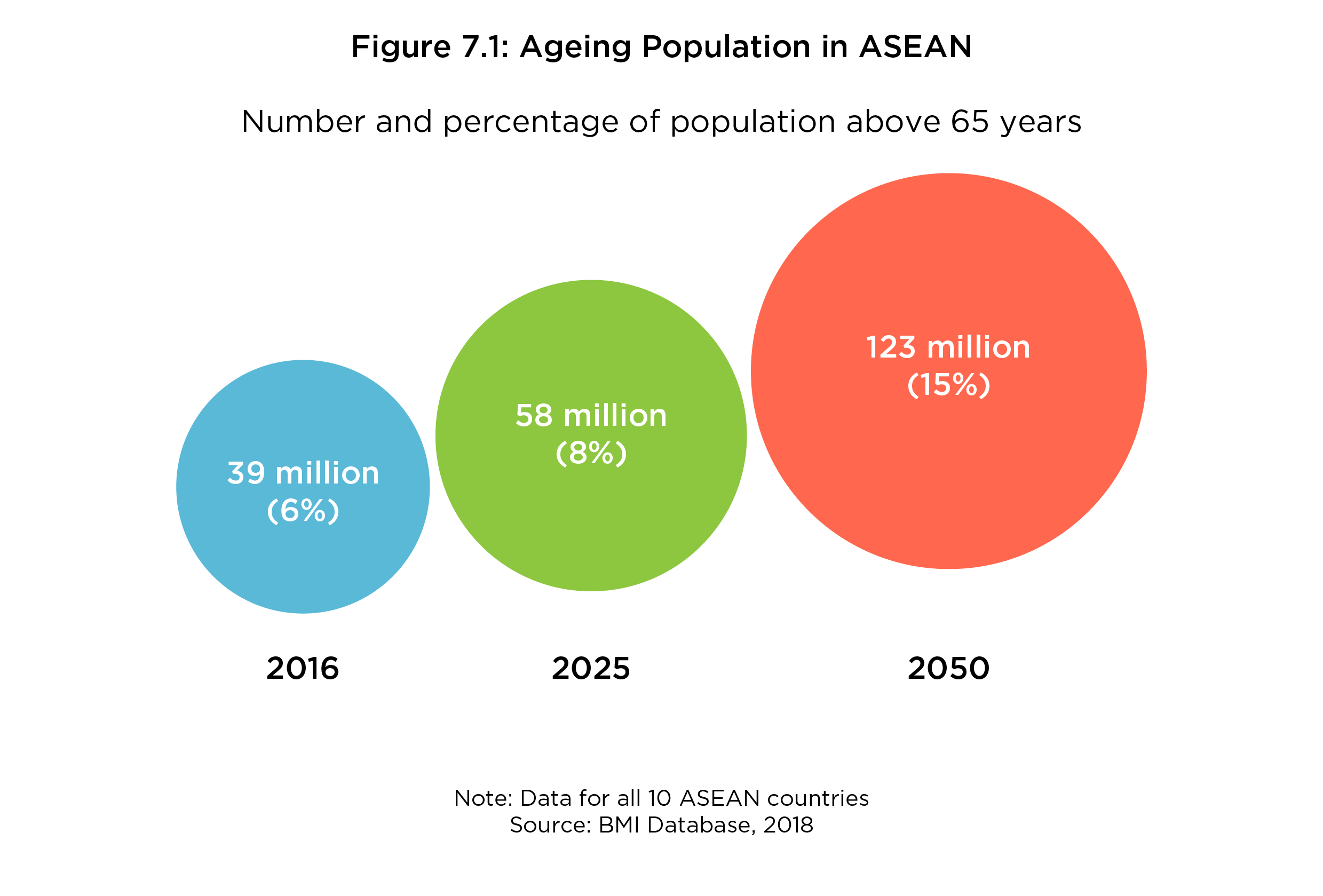 Any effort to “future-proof” the workforce must cater to both the needs of ageing economies in Singapore and Thailand as well as Indonesia’s very sizeable young workforce.

Impediments to workforce participation, mobility, education and training must be removed. Job market-sensitive strategies and business models must develop both technology and “technology-proof” skills such as creativity and entrepreneurship. We see these trends in the decentralised business models of automotive and medical services sectors, as well as partnership models involving cross-sectoral alliances and industry disruptors such as Fintech in the financial services sector.

Increasing the “seamlessness” of connectivity among physical entities (people and goods) is one critical aspect of enhancing access challenges, thus contributing to production growth.

Given the multiplier effect, government spending on transportation infrastructure are expected to increase. Indonesia, Malaysia, Thailand, Vietnam, and the Philippines have already announced multiple initiatives to push infrastructure development, especially for transportation.5 The ADB recently suggested that from 2016 to 2030, ASEAN needs infrastructure investment of around US$2.8 trillion, thus indicating an annual investment requirement of US$184 billion, i.e., equivalent to 5% of ASEAN’s GDP.6

These are just baseline estimates. Climate change mitigation and adaptation would require infrastructure investment to increase to US$3.15 trillion for the same period, with an annual investment requirement of US$210 billion, equivalent to 5.7% of ASEAN’s GDP.

The multiple G2G infrastructure collaborations, especially those involving the Belt and Road Initiative (BRI), would certainly play an important role in meeting ASEAN’s future infrastructure needs, with Indonesia, Vietnam, and Cambodia accounting for the top three recipients of BRI-related capital as of end-2018 (Figure 7.2). 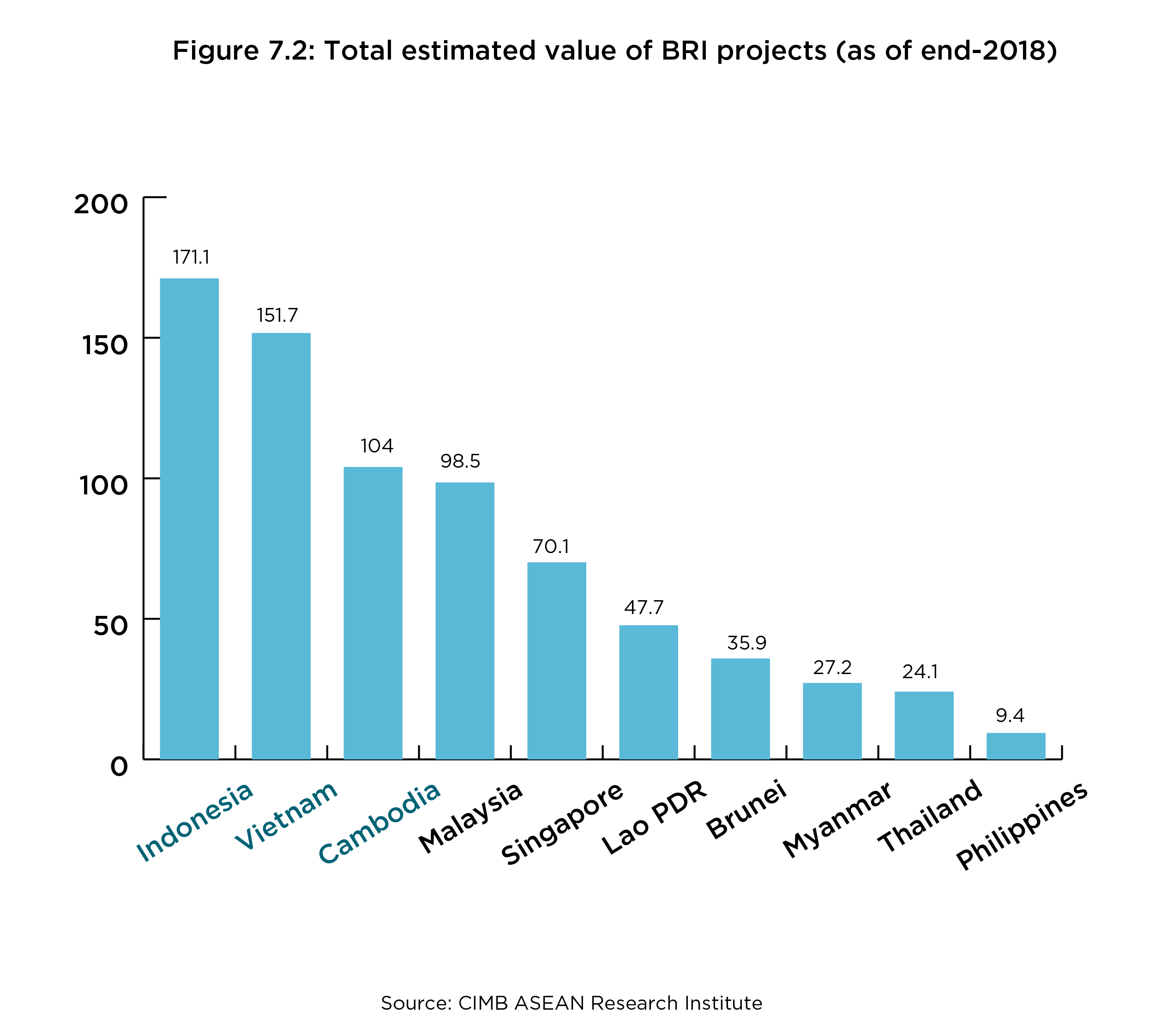 These challenges notwithstanding, successful implementation of the BRI is deemed to yield extensive indirect advantages and is also expected to mobilise greater global FDI and trade flows into ASEAN.

a) Region’s digital preparedness is an advantage

The seamless connectivity of physical infrastructure can smoothen the flow of people and goods and the same can be said of internet infrastructure and its ability to connect ideas and processes. 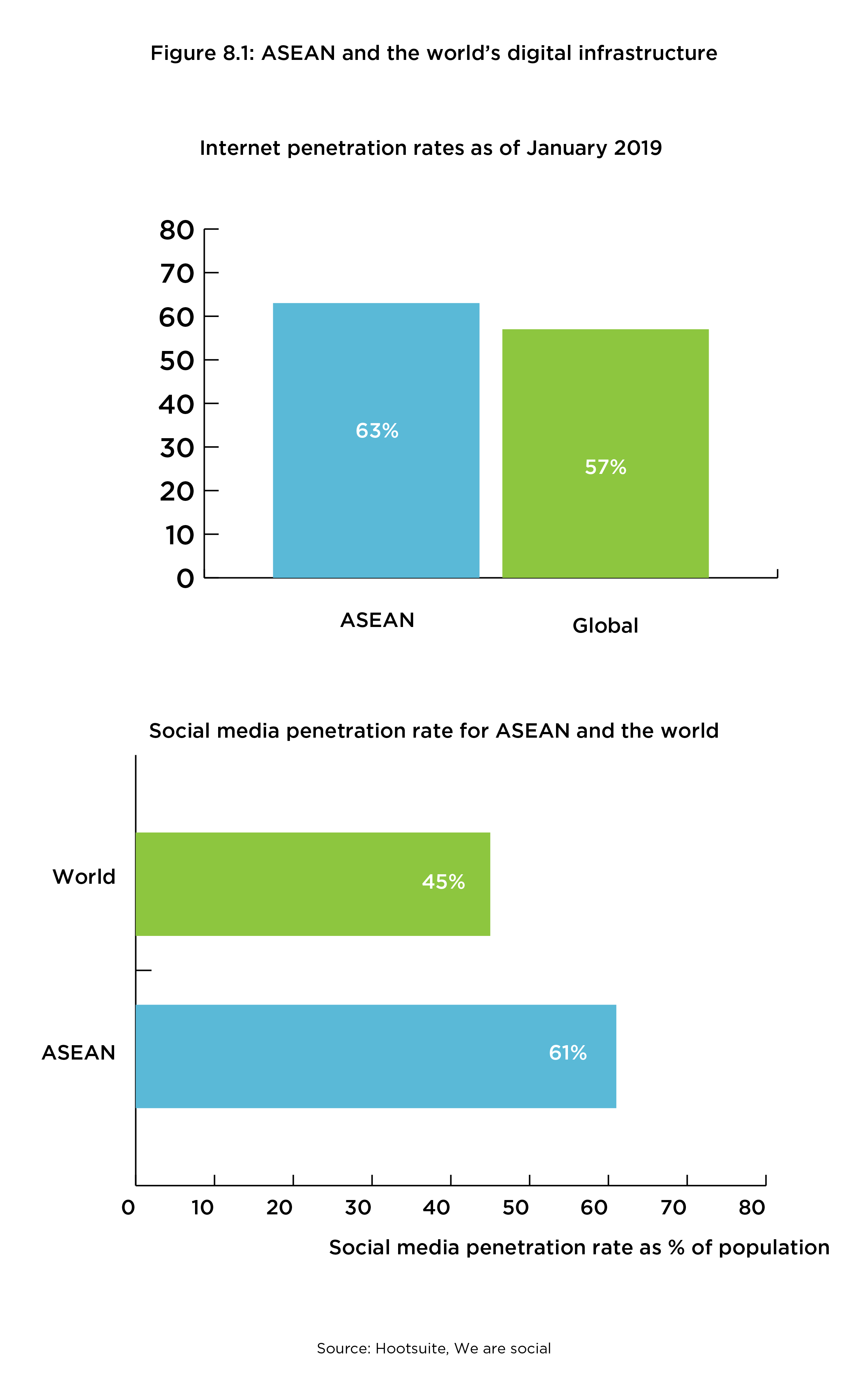 b) Meeting the 4IR challenge

Is ASEAN ready for the Fourth Industrial Revolution (4IR) given that the region is among the fastest growing internet regions in the world? One sobering perspective is that the exuberance may be somewhat premature when much of ASEAN is “pre-industrial on an industrial scale”. 16 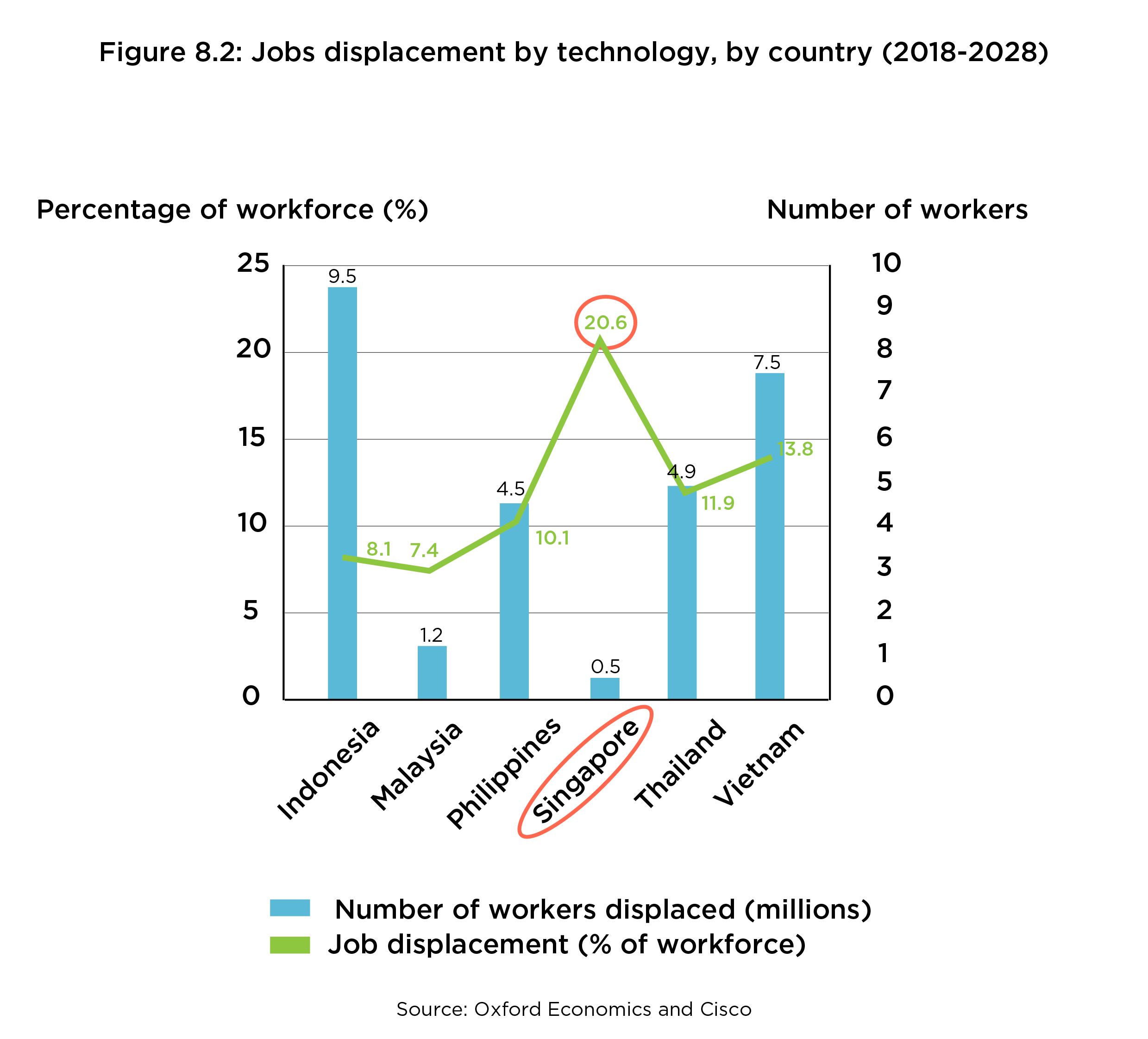 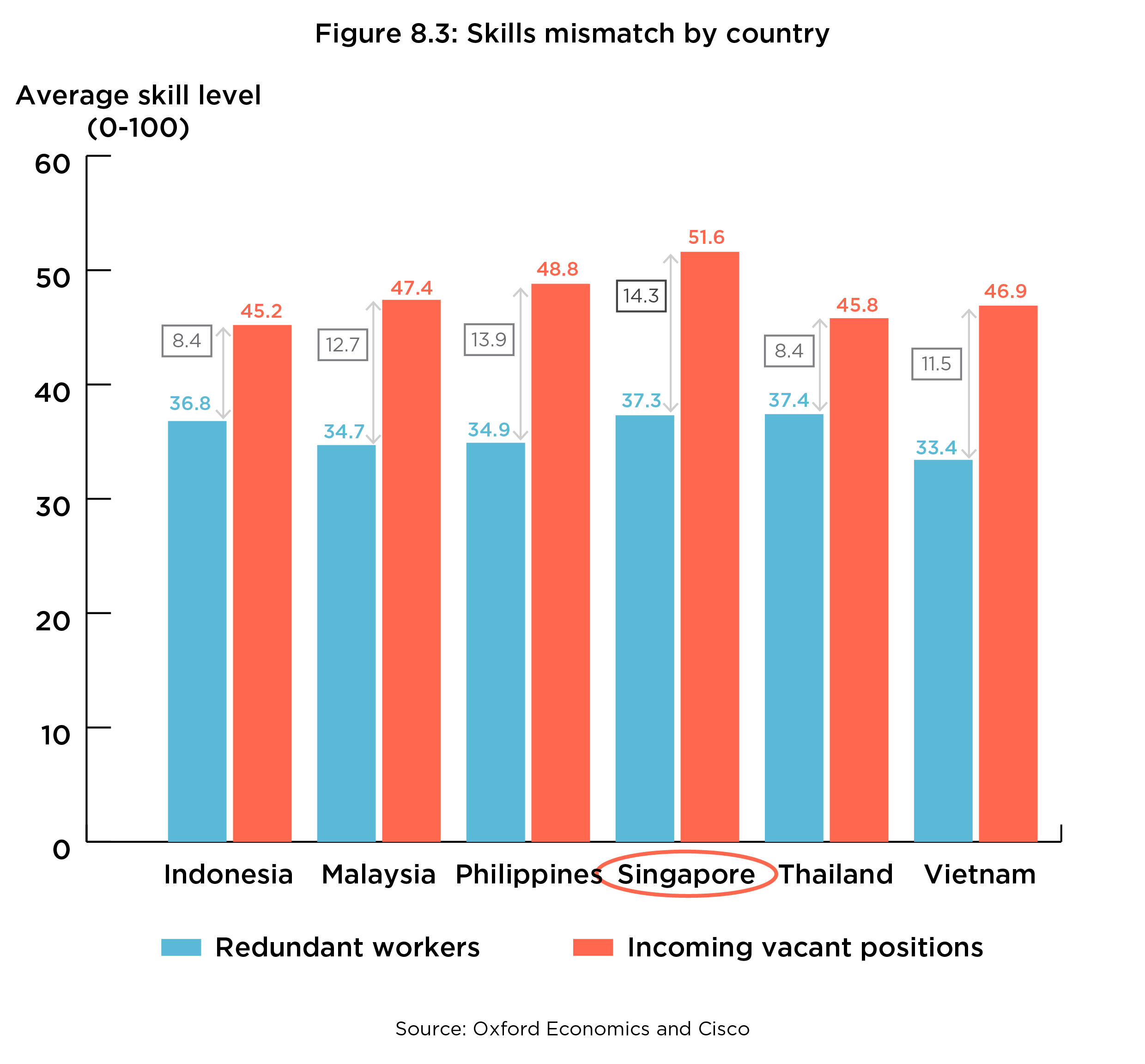 Irrespective of technological readiness, ASEAN must come to terms with 4IR. It has been estimated that given ASEAN’s manufacturing sector-dependent economies, successful adoption of 4IR could potentially bring about productivity gains amounting from US$216 billion to US$627 billion by 2025.19

The onus is now on ASEAN governments to deliver customised and agile policymaking in business ecosystems characterised by greater technological adoption, more fluid labour markets and entrepreneurial behaviour that favours the establishment of start-ups.20

As the previous section on Vulnerabilities shows, the region’s high dependence on extra-regional trade and investment poses a risk to its economic resilience. In addition, the current global economic consolidation phase also raises some concerns.

However, this is not the time for complacency as almost all growth projections for ASEAN forecast a dip in 2019, before rebounding slightly in 2020. 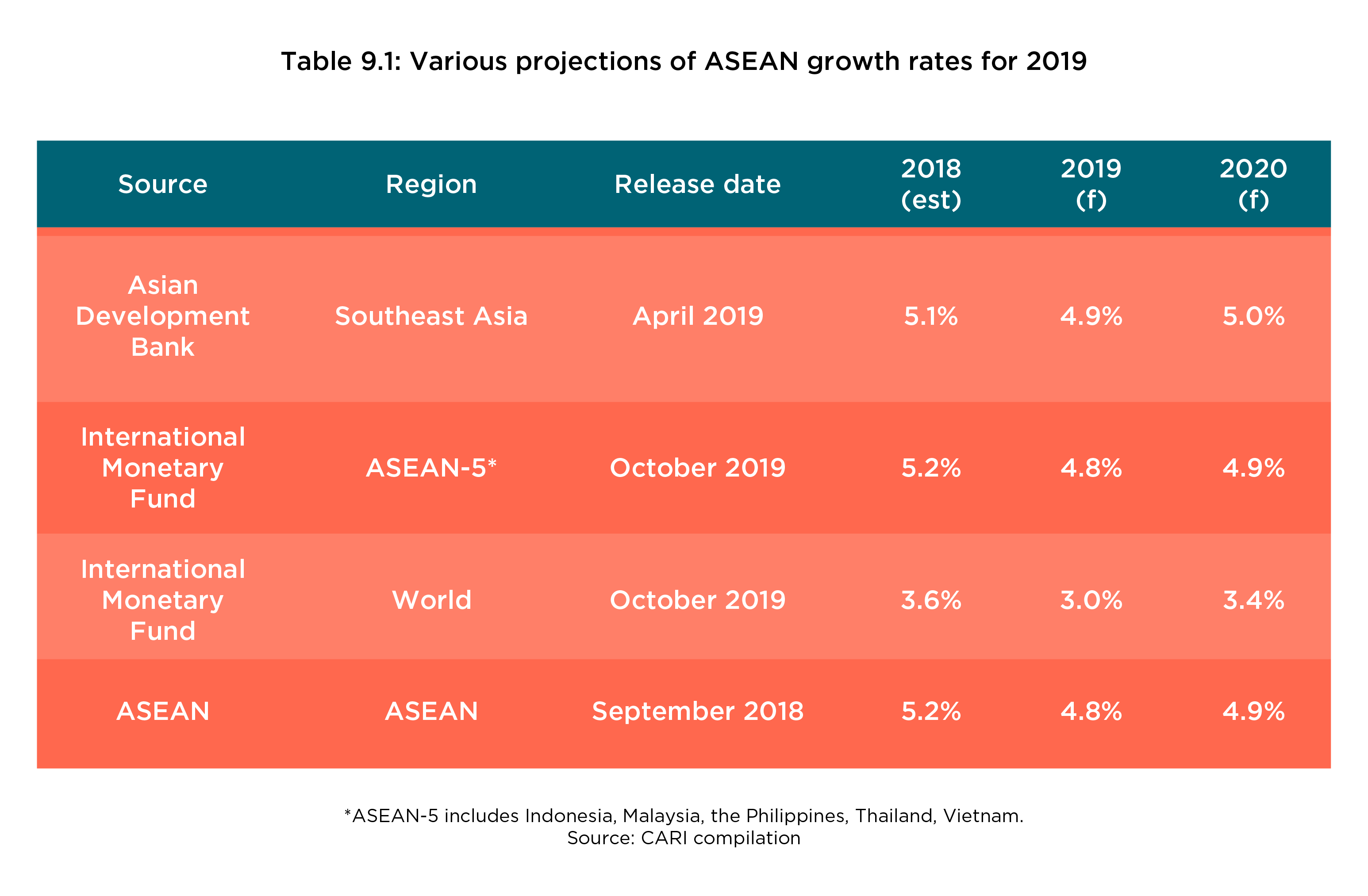 The US-China trade war has thrown a spanner in the works and could potentially be a game-changer for ASEAN as well as global trade and investment in the medium to longer term.26 Both the US and China are significant trading and investment partners for ASEAN. For instance, in 2017, China was the largest external market for ASEAN exports accounting for 14.1% of ASEAN’s total export value.27

In the earlier stages of the trade conflict, the concerns were about shorter-term disruptions to ASEAN’s export demand, supply chains and production networks. There were also fears that ASEAN markets could be flooded with redirected Chinese goods which could not find its way into the US due to tariff hikes. Then, as time progressed, there were some optimistic predictions.

Pending win-win solutions that would satisfy both China and the US, the script arising from this conflict is still being written as we head into 2020. Prior to the onset of the trade conflict, some business sentiment surveys appeared to support the ASEAN economic engine.

It is hard to know to what extent these survey sentiments have changed owing to the US-China trade conflict, especially in view of recent developments.

As it is, the trade war has already impacted the region’s 2019 growth projections, with every country having recorded slower growth for the first quarter of 2019 compared to the previous quarter. The impact of the trade war along with the identification of a slowdown in global trade ‘triggered by US-China tensions’ was ranked as the biggest risk facing ASEAN major economies based on an April 2019 study by the Japan Center for Economic Research.36

Analysts deem that ASEAN will be one of the fastest growing consumer markets in the world over the next decade and its GDP is projected to triple to US$10 trillion by 2030. The prospects of meeting such an aspiration would require addressing among other structural vulnerabilities, connectivity-related infrastructure challenges.