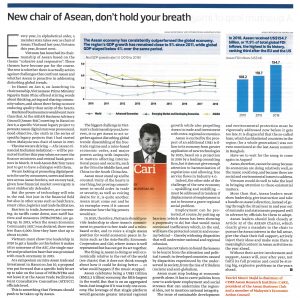 Every year, in alphabetical order, a member state takes over as chair of ASEAN. Thailand last year, Vietnam this year, Brunei next.

Vietnam has launched its chairmanship of ASEAN based on the theme “cohesive and responsive.” These themes have become par for the course. The test is whether there is actually action against challenges that confront ASEAN and whether ASEAN is pro-active in addressing disturbing global trends.

In Hanoi on 6 January, on launching its chairmanship, Vietnamese Prime Minister Nguyen Xuan Phuc offered stirring words about thinking, acting and sharing community values, and about there being no more enduring quality than unity of the hearts.

Hardened businessmen would want more than that. At the ASEAN Business Advisory Council (ASEAN-BAC) meeting in Hanoi on 9 January, a specific Vietnam legacy project to promote ASEAN digital stars was pronounced. Good objective, the sixth in the series of specific legacy projects that I had started when Malaysia was chair of ASEAN in 2015.

The one we are driving – AFIS (ASEAN Financial Inclusion Solutions) – will be promoted further this year when we meet the finance ministers and central bank governors in March. It took ASEAN-BAC four years just to get to have a dialogue with them.

We are looking at promoting digital products for use by consumers, savers and investors across ASEAN borders, not an easy task, given how financial market sovereignty is most stubbornly defended.

But the power of technology will win in the end. Not just in the financial field but also in other areas such as healthcare, smart cities, logistics and trade facilitation.

Barriers to trade, however, are increasing. As tariffs come down, non-tariff barriers and measures (NTBs/NTMs) are going up. In 2015, when the ASEAN Economic Community (AEC) was declared, there were less than 6,000. Now they have shot up to about 10,000.

Vietnam must show true leadership in 2020 to get a handle on this before it makes utter nonsense of the AEC, the single market and production base that was promised with much ceremony in 2015.

At a symposium on intra-ASEAN trade and investment in Hanoi on 10 January, a proposal was put forward that a specific body be set up to take on the issue of NTBs/NTMs and not leave it at the ASEAN Trade Facilitation Joint Consultative Committee (ATF/JCC) officials level.

This is something that Vietnam should push to be taken up by ASEAN.

The biggest challenge in Vietnam’s chairmanship year, however, is to get ASEAN to act together against disturbing global trends: dissembling of the free trade regime and a rules-based economic order, major powers acting with impunity in matters affecting international peace and security, such as the US in the Middle East, and China in the South China Sea.

ASEAN must stand up and be counted. Unity of the hearts is one thing, but proving commitment to world order in trade or security, as well as voicing desire for it is quite another. ASEAN must come out and be an exemplar even if it cannot determine how the big powers would act.

In 2020, therefore, Vietnam should provide leadership to show ASEAN’s commitment in practice to free trade and a rules-based order, and to voice a single ASEAN position for world economic peace in forums such as the Asia-Pacific Economic Cooperation (APEC) and the G-20, where ASEAN is well-represented but has not got its act together.

The thing is, ASEAN is doing well economically relative to the rest of the world (see charts) that it does not think enough about how it could be doing better – or what could happen if the music stopped.

​​The ASEAN economy has consistently outperformed the global economy. The region’s GDP growth has remained close to 5 % since 2011, while global GDP stayed below 4% over the same period. 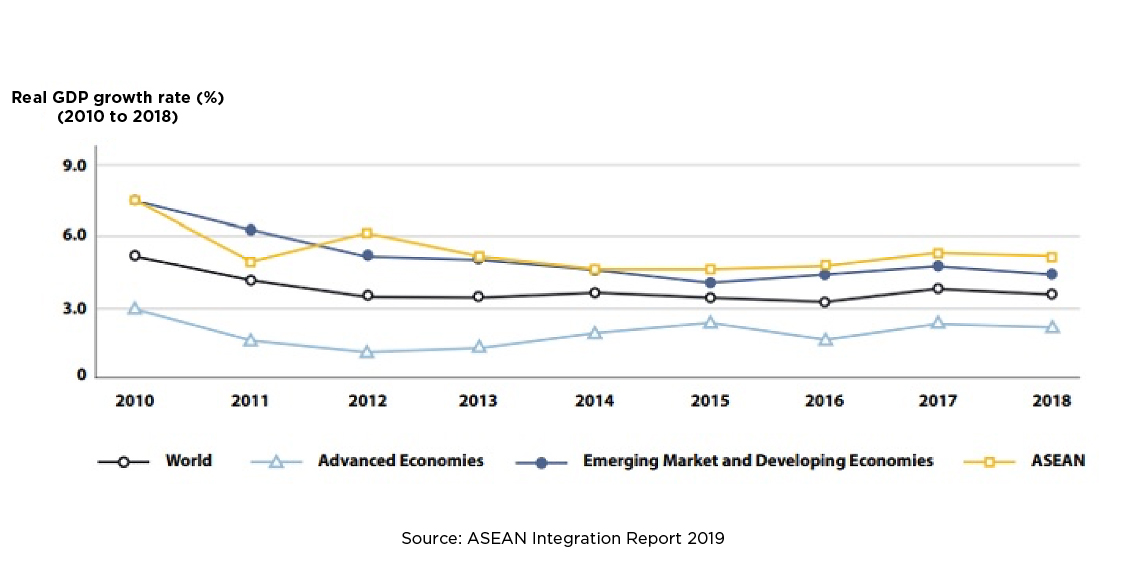 ASEAN celebrates being a US$3 trillion (RM12.2 trillion) economy, the fifth-largest in the world. But that is on an aggregated basis. Just imagine if it was truly one economy. The leverage of that single platform would generate greater internal regional growth while also propelling ASEAN in trade and investment with extra-regional economies. 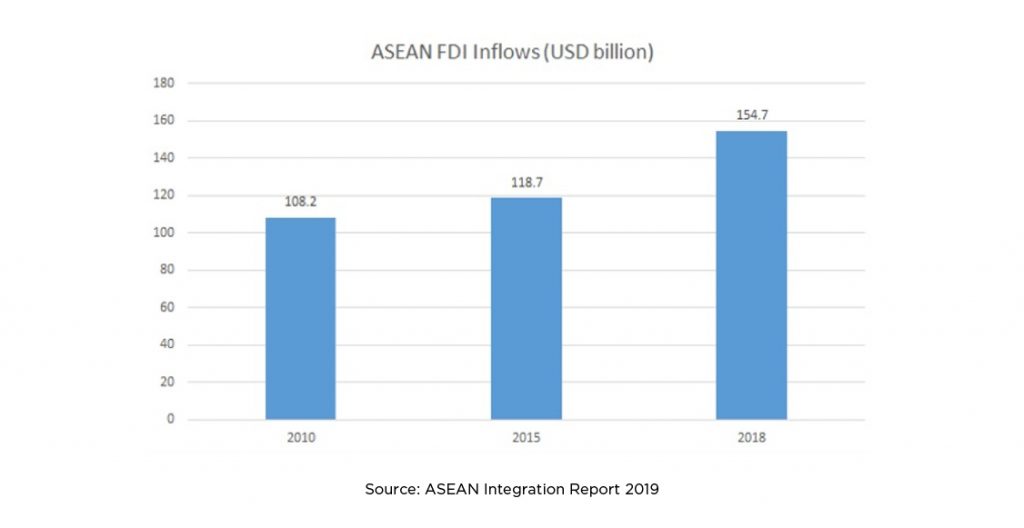 ASEAN is excited by the prospect of an additional US$1 trillion to its economy from greater application of new technologies by 2025, based on a projection in 2016 by a leading consulting firm, but it does not give enough attention to harmonisation of regulations and allowing free service flows in Industry 4.0.

Indeed, the other side of the challenge of the new economy – upskilling and reskilling – must be addressed in tandem if displacement of employment is not to become a grave regional social problem.

Employment can be protected, of course, by putting up barriers (which ASEAN has been showing a propensity to do) but that would mean continued inefficiency, which in the end, will leave the protected country and economy behind – thereby widening disparities that will undermine national and regional cohesion.

ASEAN has not taken on board the lessons to be learnt from the alienation and political tumult in developed countries caused by disparities experienced by the underserved in society, from the rise of tribalism (racism) and anti-globalism.

ASEAN must stop looking at economic growth alone. It has to carve policies from now to anticipate employment and social stresses that can undermine the regional idea, not to mention national integrity.

The issue of sustainable development and environmental protection must be vigorously addressed now before it gets too late. It is disgraceful that the so-called haze, which has blanketed countries in the region (for a whole generation!) was not even mentioned at the last ASEAN summit in Bangkok.

Have we to wait for the smog to come again next August?

ASEAN therefore, cannot be smug because its economies are doing relatively well, as the music could stop, and because there are social and environmental issues to address.

Vietnam would do well to take the lead in bringing attention to these existential matters.

More than that, ASEAN leaders must show leadership, give instruction, and take a handle on ASEAN’s direction, instead of going through the ritual year in and year out of summits and statements prepared well in advance by officials for them to adopt.

ASEAN leaders should look closely at Article 32 of the ASEAN Charter, which clearly gives a mandate to the chair to pursue the ASEAN interest in the fullest sense, give the chair their full support, actively inject their ideas and make sure there is meaningful content in ASEAN activities in the year ahead.

Without their active involvement and support, ASEAN will, year after year, not fulfill its full promise, and could be storing big, explosive problems in the years ahead.