Professor of International Economics at the University of Indonesia

Mari Pangestu is Professor of International Economics at the University of Indonesia, Senior Fellow at Columbia School of International and Public Affairs, Board Member of Indonesia Bureau of Economic Research (IBER) and on the Board of Trustees, Centre for Strategic and International Studies Foundation, Jakarta. She currently serves on a number of boards such as the Leadership Council of the UN Sustainable Development Solutions Network (SDSN); Member of the High Level Commission on Carbon Prices; Distinguished Fellow Asia Global Institute, University of Hong Kong; Board Member to Australia Indonesia Council; Member of Editorial Board of Bulletin of Indonesian Economic Studies, ANU; Member of the Global Future Council on Trade and Investment, World Economic Forum; and President of the United in Diversity (UID) Foundation, Jakarta. She served as Indonesia’s Minister of Trade from 2004 to 2011, and as Minister of Tourism and Creative Economy from 2011 until October 2014. During her time as Minister of Trade, she led international trade negotiations and cooperation for Indonesia.

Dr. Donald Hanna has an insightful blend of both global perspective and local ASEAN experience in analyzing global macroeconomic and policy developments, having done his first work on ASEAN while still in graduate school. He began his professional career with the World Bank working in Washington DC and Jakarta, Indonesia. He has managed macroeconomic teams for Goldman Sachs and Citigroup, ending his stint with Citi as their Deputy Chief Economist. In addition to sell-side experience, Dr. Hanna has worked on the buy-side providing macro and market views to risk takers at two hedge funds. He has also set up and managed an independent, Asian-focused macro research office.

Fukunari Kimura is the Chief Economist for Economic Research Institute for ASEAN and East Asia (ERIA) and Professor, Faculty of Economics, Keio University. He was born in Tokyo in 1958. He received his Bachelor of Laws from the Faculty of Law, University of Tokyo in 1982. He then received Master of Science and PhD titles from the Department of Economics, University of Wisconsin-Madison in 1990 and 1991, respectively. He worked for the Department of Economics, State University of New York at Albany as Assistant Professor in 1991-1994, and in the Faculty of Economics of Keio University as Associate Professor in 1994-2000. In particular, he has recently been active in writing academic/semi-academic books and articles on international production networks and economic integration in East Asia.

Lydia Ruddy is the Director of Communications for the Economic Research Institute for ASEAN and East Asia (ERIA), an international organization based in Jakarta. With over 20 years of experience, she has worked at the nexus of the public and private sectors focused on development from the local to the international level. Fluent in Indonesian, she has spent over 10 years advising Indonesian and International businesses and organizations on strategic planning, communications, sustainability and policy issues. Prior to ERIA, she served as Advisor to the Chairman of the Indonesian Chamber of Commerce and Industry where she managed public relations, hosted foreign delegations, researched special topics, and wrote the Chairman’s speeches. Trained in Law (J.D.) at Georgetown University and Urban Planning and Geography (M.U.P, A.B.D.) at the University of Washington, Ms. Ruddy has lived and worked in Indonesia since 2006 when she came as a Fulbright scholar to research private investment during Aceh tsunami reconstruction. Clients and employers have included USAID, ADB, Save the Children, private equity firms, forest products (paper and timber) companies, and business advisory consultants. Before coming to Indonesia, Ms. Ruddy’s career focused on legal practice, real-estate development and land conservation on the West Coast of the United States.

The CIMB ASEAN Research Institute (CARI) in collaboration with the Economic Research Institute for ASEAN and East Asia (ERIA) organised an ASEAN Roundtable Series (ARS) on 26th July 2019 in Kuala Lumpur. The ARS was held in conjunction with the launch of the ASEAN Vision 2040 report by ERIA, which looks at strategies to guide ASEAN for the coming decade in light of major external issues including the US-Sino tensions, rising competition from economies such as China and India, and rapid technological development.

Titled ‘ASEAN 2040: The imperative of collective leadership, integration and centrality in uncertain times’, the roundtable looked into how ASEAN can enhance policy capacity and coordination, implement internal institutional changes, and engage with outside partners to ensure ASEAN’s growth and regional centrality. To bring clarity to such complex issues, the roundtable featured eminent speakers such as Professor Mari Elka Pangestu, former Minister of Trade for Indonesia and currently Professor of International Economics at the University of Indonesia; Dr. Donald Hanna, Chief Economist of CIMB; and Professor Fukunari Kimura, Chief Economist for ERIA.

Lydia Ruddy, Director of Communications at ERIA first presented the key messages put forth in the ASEAN Vision 2040 report. Lydia referenced guiding themes of the research namely: 1) striving for an inclusive ASEAN, 2) making ASEAN vital to the lives and livelihoods of its peoples, and 3) ASEAN’s future may be diminished if the bloc fails to deliver.

Lydia noted that ASEAN is facing numerous challenges including a realignment of geopolitics, the Fourth Industrial Revolution, and rapid digital transformation. More than ever, ASEAN should strive towards a plural global order characterised by free trade. With this in mind, the ASEAN Vision 2040 is built upon seven foundations: 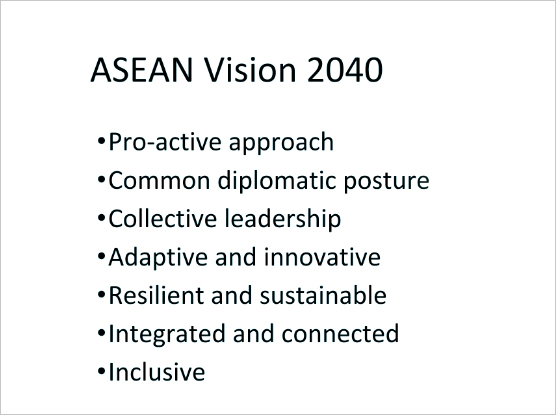 With these in mind, Lydia laid out the three areas which ASEAN should prioritise for the coming decade:

In conclusion, enhancing policy capacity and cooperation on these three strategic priorities can help ASEAN manage the rapid changes underway. There is now a need for greater creativity, complementarity and connectivity on the part of the bloc.

Taking advantage of new technologies for economic development in ASEAN 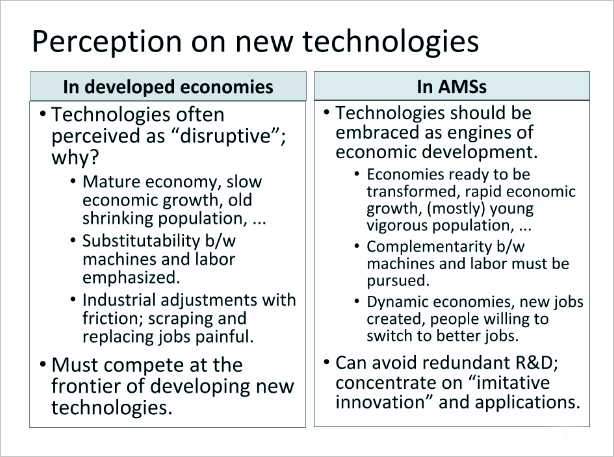 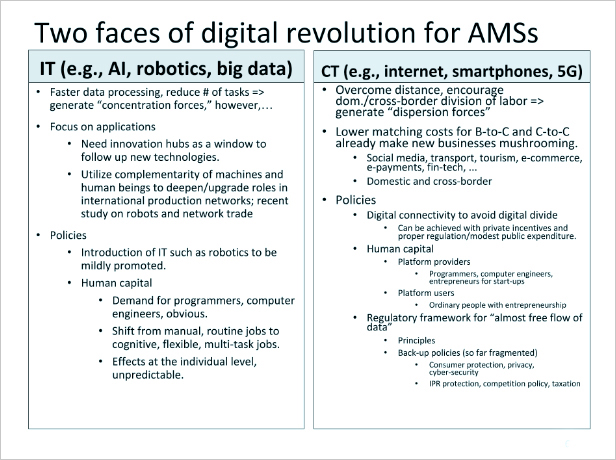 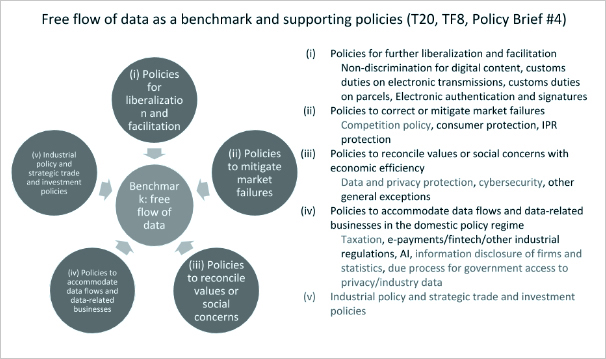 Trade and development amidst disruptions: implications for ASEAN

Professor Mari Pengestu, former Minister of Trade for Indonesia and currently Professor of International Economics at the University of Indonesia, presented on trade and economic development for ASEAN amidst an external environment characterised by rising protectionism and a drawback from globalisation. 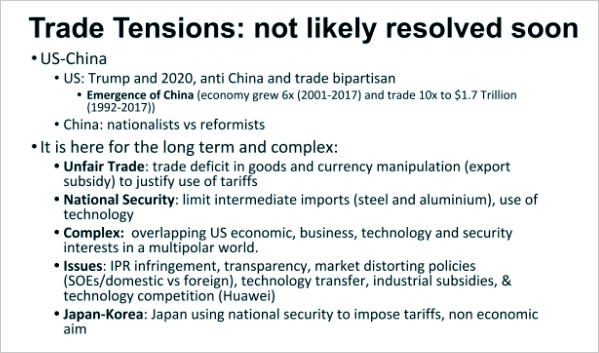 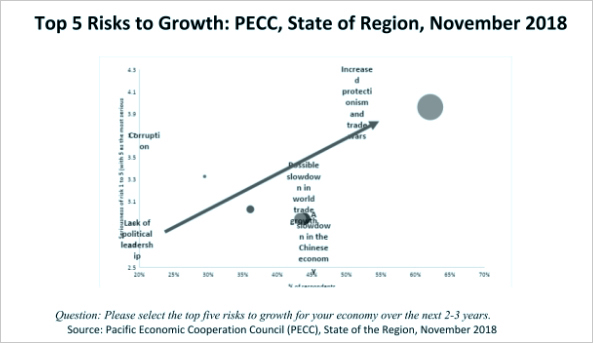 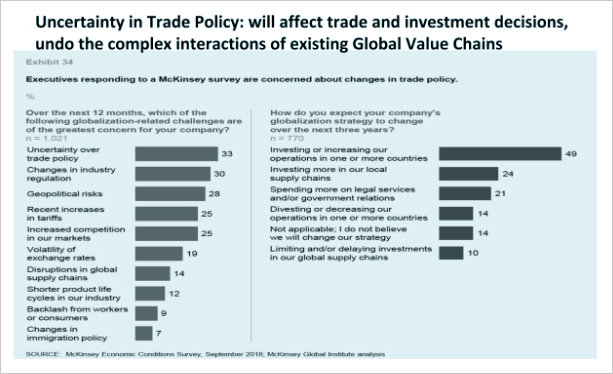 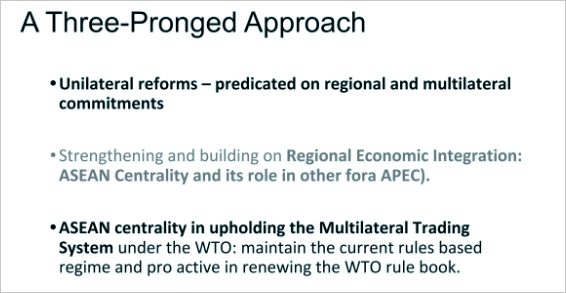 Dr. Hanna opened his speech by admitting that the rise of protectionism around the world was in part because economists were for too long focused on the power of the market to the detriment of the responsibility of the state to address inequality.

In conclusion, ASEAN is entering an era where global norms are being disrupted due to the rise of populism, shifts in the global economy, and rapid technological development. As such, it is incumbent on ASEAN to reconceptualise its vision to guide the bloc over the next two decades. This will include adopting new technologies without fear to further deepen the bloc’s involvement in regional supply chains, as well as promote inclusive and sustainable growth. ASEAN will need to reemphasise its centrality in regional architectures in light of the ongoing US-Sino tensions to maintain the bloc’s integrity and maintain regional stability. 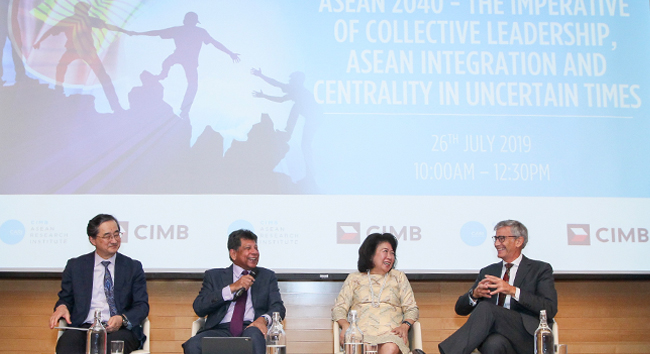 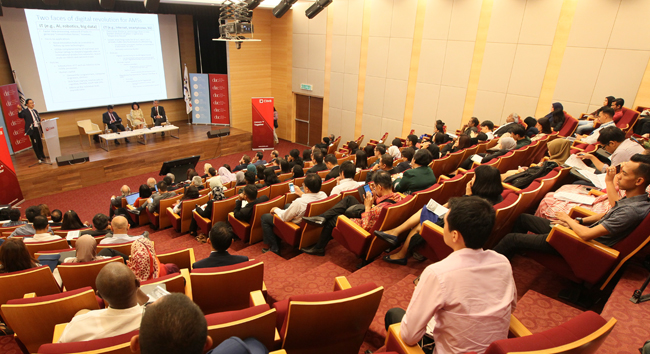