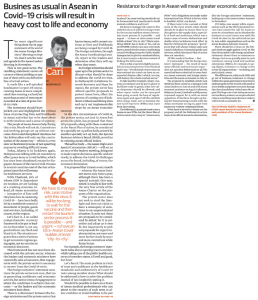 The most significant thing about the 28-page statement at the end of the ASEAN Foreign Ministers’ Meeting on 9th September is that it sets the tone and agenda for the ASEAN Leaders Meeting in November.

This is not good news. The rambling statement covers all corners without settling on any one of them with any definitive line of actual action.

It reads like a self-satisfied headmaster’s report. Of course, running ASEAN is more complicated than running a school, but rather more than an end-of-term report is needed at a time of grave COVID-19 crisis.

The statement should have picked out and highlighted the critical issue of protecting lives and livelihoods in ASEAN, what has to be done about it, with timelines and a sense of urgency.

The people of ASEAN deserve help during this crisis. Words will not do. Committees and working groups set up without outcome-driven and disciplined timelines for the deliverables will only see the continuation of the ASEAN way – which is a very slow orchestrated process of not upsetting anyone by avoiding difficult issues.

Jakarta is in lockdown again. Malaysia was talking with six countries to effect green lanes or travel bubbles, which has since been abandoned, except for Singapore, because of the rise in COVID-19 cases in several countries and of the fear of imported cases that will swamp its healthcare services.

With Thailand, 20% of whose GDP is dependent on tourism, we are looking at a crashing economy. Indeed all ASEAN economies – irrespective of how well they have done in containing COVID-19 – have been badly hit by a worldwide control of movement of people, goods and services, including, of course, in the region.

Let’s face it. A so-called comprehensive recovery framework to be put to leaders in November is not any good without any flesh and blood in it. The situation requires first a series of actions to get economic engines going again, not an exercise in economic discourse.

The foreign ministers’ statement mentions the private sector just once, that too in generating confidence and economic activity, but not in terms of engagement to attain the conditions to achieve that outcome – as the leaders and the economic ministers have done.

There is a disconnect between the foreign ministries and the private sector that harms ASEAN and it cannot continue as lives and livelihoods are being ravaged by COVID-19. The foreign ministers, through the ASEAN Coordinating Council, report to the leaders and determine what they will say when they meet.

So, foreign ministries should open up to the private sector, to discuss what should be done to address the Covid-19 crisis. In Pathway225 (“A Pathway Towards Recovery and Hope for ASEAN”), the private sector has offered specific proposals to protect ASEAN lives, effect the process of coming out of lockdown without sacrificing lives, and to carry out implementable steps for ASEAN economic recovery.

In the dire circumstances of COVID-19, the private sector, not just in ASEAN but across the globe, has proposed that these 225 proposals, along with those contained in the Hanoi Plan of Action, be considered by a specially set-up ad hoc body, assisted by another specially set-up body, the Special Business Advisory Board (SBAB), as well as by existing ASEAN official bodies.

This ad hoc body – the ASEAN High-level Special Commission (AHLSC) – will act as an exco of the leaders meeting, delegated to make urgent decisions, specific and not wordy, to address the COVID-19 challenges across the board, including of course the economic dimension.

It is proposed that it meets every month – whereas the ASEAN Summit only meets twice a year, although there has been a special summit this year. The AHLSC is totally in line with the very first article of the ASEAN Charter on the purposes of the organisation.

The private sector does not seek to steal the limelight and does not claim to have the monopoly of solutions to an unprecedented situation. It puts out those 225 proposals to be considered by the AHLSC, for it to prioritise and adopt as it sees fit, but importantly to pick out proposals for urgent implementation, not more and more further study by more and more committees while Rome burns.

For example, the foreign ministers’ statement talks about opening travel corridors while taking care of the public health concerns of member states. All well and good, but how?

Let’s face it. The main problem is lack of trust and confidence in the healthcare standards and in the authenticity of COVID-19 tests among member states. What should be addressed is how to solve this problem instead of just implicitly stating it.

Would it be possible to have an A-Team of ASEAN medical professionals who can attest to the veracity of such tests to allow corridors or travel bubbles to be put in place? Can mass testing standards not be harmonised and monitored to build mutual confidence and trust?

We have to manage risk. Learn to live with this virus. It will be too long to wait for the vaccine and then restart the tourism sector process. It is possible – and urgent – to have an intra-ASEAN travel bubble, at least “city-to-city”. This is something the AHLSC has to look at. Yes, call on the ACCWGPHE (which, I am sure everybody knows, stands for the ASEAN Coordinating Council Working Group for Public Health Emergencies), to give its considered advice, but the it must come down to a decision instead of kicking the ball around.

This is what a top-level, highly successful tourism entrepreneur from Thailand had to say: “Overly harsh restrictions on international air travel can have an unexpected domino effect which will, in turn, destroy the whole tourism sector.”

To take another example, what e-customs procedures can be put in place to facilitate trade in goods, what low value shipments should be allowed, and what repeat trades can be exempted from going round the loop of regulations again and again? All this inhibits intra-ASEAN trade, not to mention the non-tariff barriers (NTBs) that have been increasing.

The Pathway225 proposals want to see a freeze on new NTBs, but the Hanoi Plan of Action only wants a stop to “unnecessary NTBs” with obligations not made under international law. Which is better, what is feasible? The AHLSC can decide.

If there were to be a second or third wave of the virus attack, what should already be in place to ensure there is no disruption in the supply chain, especially of food and medicines, which was a major cause of severe dislocations and deaths when lockdowns took effect in March? Pathway225 proposes “green” ports that will always remain open and a quick definition of essential goods (and services, which the Hanoi Plan of Action does not mention).

All this needs to be done – fast.

It is astounding that the foreign ministers’ statement – the result of many ASEAN officials’ and secretariat’s input – should not mention Pathway225 at all. The report had been submitted to ASEAN leaders, ASEAN economic and foreign ministries and the ASEAN Secretariat on 23 July 2020.

The proposal to establish the AHLSC and SBAB had been raised in a dialogue with ASEAN leaders on 26 June and with ASEAN economic ministers on 24 August. Indonesia, Malaysia, Brunei, Cambodia and Myanmar expressed support for it, with no stated opposition. It had been brought up during the brainstorming session with the ASEAN Secretariat on 14 August, apart from numerous written communications.

What hand is at work to freeze out the proposal, and all the Pathway225 action steps, from official ASEAN documentation, like the foreign ministers’ statement, leading up to the ASEAN Leaders Summit in November?

If it helps, now august white organisations like the World Economic Forum have joined the call for ASEAN to move to a Great Reset, and to abandon the business-as-usual ASEAN way amid the COVID-19 crisis. So the call is not led just by non-white organisations such as the ASEAN Business Advisory Council.

There should be a focus on the life-and-death struggle against COVID-19. The kind of narrative in the foreign ministers’ statement shows there is resistance to change. Just as we grandly point to such resistance among small and medium enterprises (SMEs) for example, to going digital, resistance to change exists across all organisations – including, and particularly, ASEAN.

The difference is, while such SMEs will go out of business, resistance to change within the ASEAN governance structure in addressing the COVID-19 crisis will result in more deaths and greater economic damage than has already been visited upon the region. This huge cost of not taking necessary extraordinary action in an unprecedented crisis is something ASEAN decision-makers will be held accountable for.