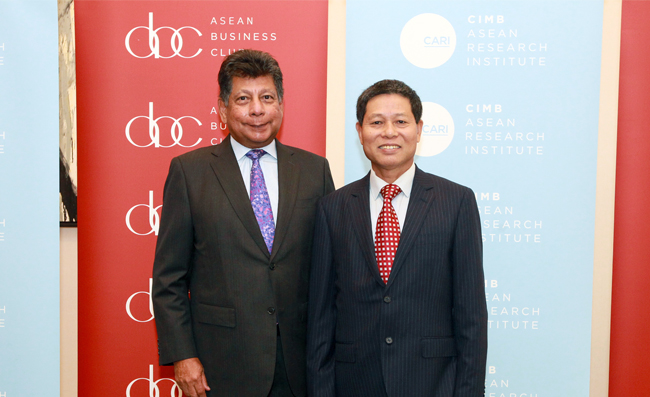 During his presentation, H.E. Dr. Quynh spoke of Vietnam’s theme and priority areas for the year. As unveiled by his government in Hanoi on 6 January, the ASEAN 2020 theme of “Cohesive and Responsive” will be centered on five priorities: 1) strengthening ASEAN unity and regional centrality, 2) intensifying economic integration, 3) promoting the ASEAN identity, 4) enhancing ASEAN’s global partnership for peace and stability, and 5) developing the bloc’s institutional capacity and effectiveness. 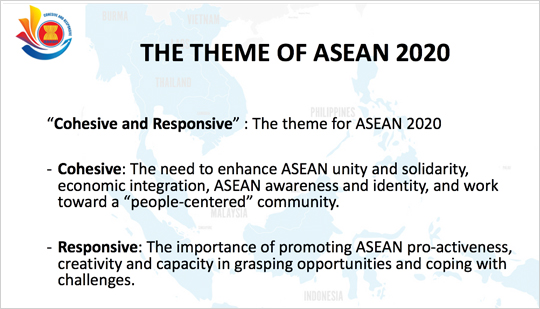 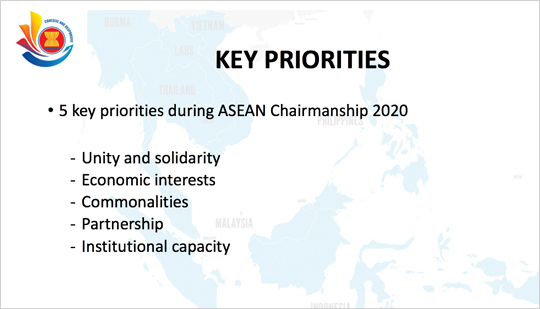 According to Dr. Quynh, the theme of cohesiveness meant the need to enhance ASEAN unity and solidarity, economic integration, ASEAN awareness and identity and efforts towards creating a “people-centered” community. As for the theme of responsiveness, Vietnam would like to promote ASEAN proactiveness, creativity and capacity in grasping opportunities and coping with challenges. Among the challenges ahead include the uneven implications from the Fourth Industrial Revolution (4IR), the escalation of traditional security issues, the rise of non-traditional security threats and the strategic competition between major powers.

2. Leveraging upon ASEAN unity and solidarity on the international stage

With the many challenges facing ASEAN, one of Vietnam’s focus for ASEAN in 2020 is unity and solidarity. Under this priority area, Vietnam intends to forge close relations among ASEAN Member States and respond effectively to challenges and threats, said Dr. Quynh.

Tan Sri Munir asserted that ASEAN needs to work through its Member States’ individual membership in prominent international avenues in order to have a louder voice on the global stage. According to him, ASEAN countries already have representation at the G20 meetings. Indonesia is a firm member of G20, Singapore is usually invited to the G20 through the Forum of Small States (FOSS) and in 2020, Malaysia, as the chair of the Asia-Pacific Economic Cooperation (APEC), is invited to the G20 meetings as an observer.

“ASEAN needs to work together now and prepare the groundwork for the position it is going to take in these meetings.”

While ASEAN has performed well in terms of GDP growth in this decade (it became the fifth-largest economy in the world in 2018 ), its share of intra-ASEAN trade in goods has remained below 25% in the last 10 years. The number of non-tariff measures (NTMs) has increased as well. The cost of intra-ASEAN trade should be brought down in line with the reduction in the number of NTMs, he said.

In 2018 ASEAN has risen to fifth place among the largest economies in the world, with nominal GDP estimated at USD 3.0 trillion, an increase of more than 50% from its 2010 level 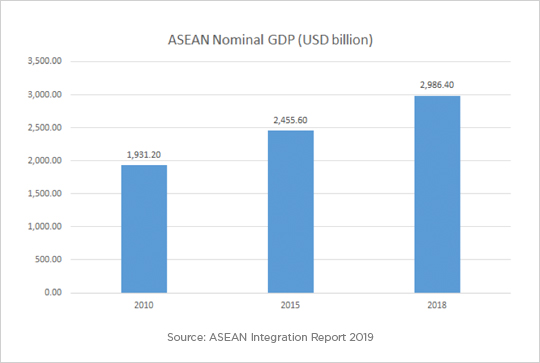 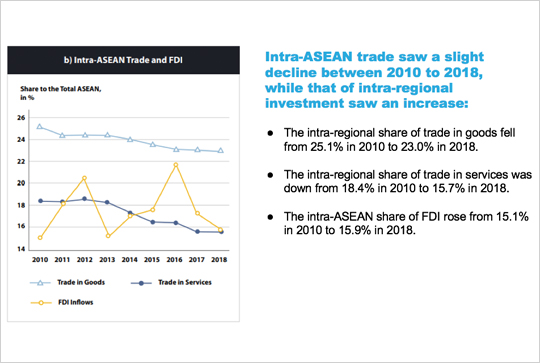 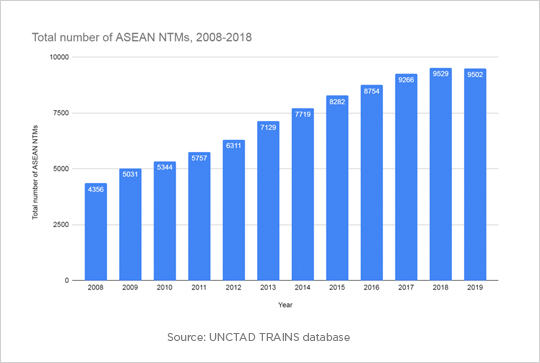 3. Equally important issues for ASEAN to address – the environment and sustainability

Aside from the essential, key issues of multilateral trading system, the promotion of intra-ASEAN trade and efforts to reduce the number of NTMs, Tan Sri Munir highlighted other issues the regional bloc has failed to deal with in any vigorous fashion: the environment and equitable development.

“ASEAN has shown a surprising lack of attention to the environment, particularly when it has experienced the transboundary haze issue for many, many years now. ASEAN must begin to address these issues for its own sake. The topic that is frequently discussed has always been growth, economy and investment. Issues like the quality of life of the ASEAN people, their income level and the environment has not received the same amount of attention,” he said.

He added that the haze has been going on for a generation. Has ASEAN been able to stand up and talk about the environment and other business? This is disgraceful. Are we waiting for August to come again this year and go through the whole thing again?” he added.

He added that the haze has been going on for a generation and it is a regret that ASEAN could not resolve this annual problem. The cost of the haze in 2019 on the Indonesian economy according to World Bank estimates was US$5.2 billion. This amount is equivalent to 0.5% of the Indonesian economy and caused US$157 million in direct damages and US$5.0 billion in losses from affected economic activities. He further pointed out that these figures, however, do not include the economic cost to other affected ASEAN countries, as well as the cost to health. ASEAN must make the effort to address the haze, be it at the bilateral, trilateral or quadrilateral level, or risk it happening again this year.

Another issue vital for ASEAN is equitable development. The rise of anti-globalisation sentiments around the world in the form of large scale protests are due to many factors including income disparity and inequitable growth. Tan Sri Munir stressed that if the disparities between ASEAN countries, and within ASEAN countries continue without being addressed, ASEAN could face the possibility of political upheaval.

Dr. Quynh pointed that the areas that Vietnam would also pursue the sustainability agenda in the form of the circular economy, and the Digital Integration Index.

“Sustainability is important for Vietnam. Our GDP growth was 7% last year, we can achieve more but we need to focus on sustainability,” he said. Under the fourth priority of enhancing ASEAN’s global partnership for peace and stability, Vietnam will promote partnerships for sustainable development. The country also intends to create a platform that would allow the sharing of best practices in the circular economy and develop the Digital Integration Index to monitor and improve the effectiveness of areas under the ASEAN Digital Integration Framework, which was endorsed at the 33rd ASEAN Summit in Singapore in December 2018 and had its action plan adopted at the 35th ASEAN Summit in Bangkok in November 2019.

The year 2020 marks the mid-term mark of the ASEAN Community’s Master Plan 2015-2025 and ASEAN Vision 2025. It also marks 25 years of Vietnam’s participation in ASEAN. How Vietnam goes about implementing the priorities the country has laid out for its chairmanship will have much bearing on the direction of the regional bloc going forward. One of the priorities, which aims to strengthen ASEAN’s institutional capacity bears much promise but it is not without its challenges. Nevertheless, if ASEAN-led mechanisms and processes could be made more efficient and outcome-driven through institutional reform and improvements of rules and procedures, ASEAN could fully realise its economic potential.