CARI Briefings on How can ASEAN bounce back: China’s economic trajectory and ASEAN 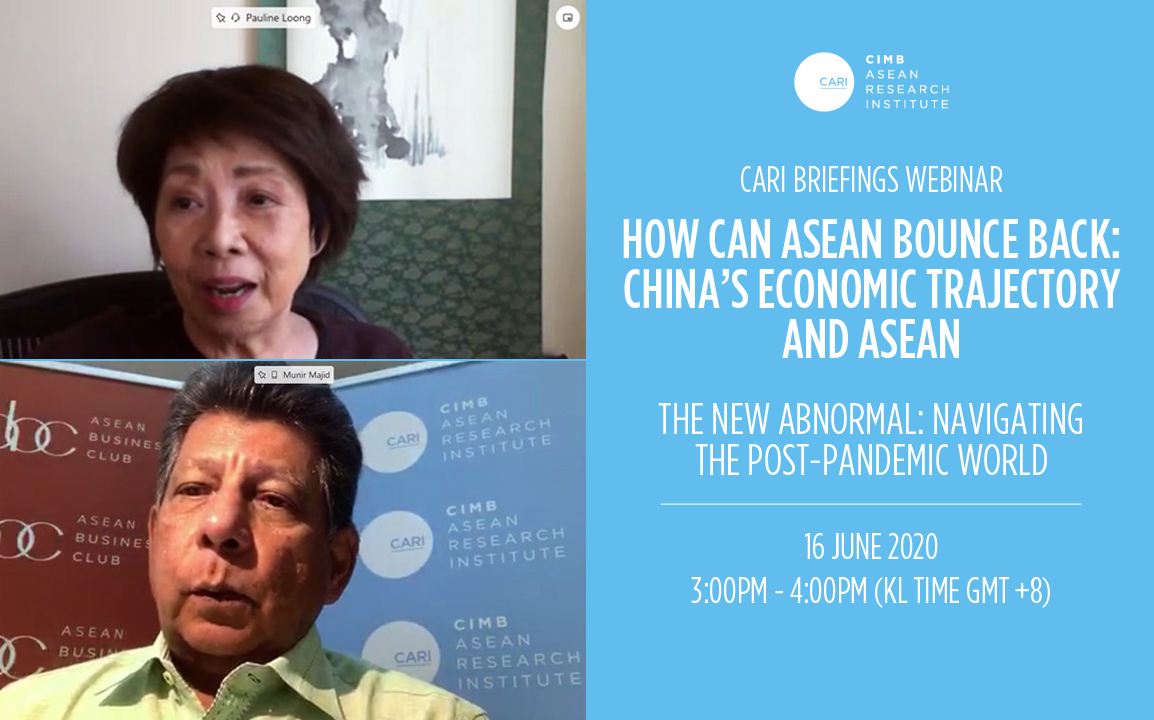 CARI Viewpoint: China’s economic recovery likely to take place in 2021 while ASEAN needs to stop selling itself short to gain from its sweet spot

Businesses in many countries have started to reopen in the hopes of restarting battered economies amid the COVID-19 pandemic. To add to the uncertainty, political rumblings ranging from anti-racist protests in the US to those protesting against the imposition of security law in Hong Kong threaten to have long-term implications. With the situation looking bleak, many look to China to lead the world back on the economic recovery path.

During the briefing, among the key insights shared were:

1) China will be back in business, just not this year


a. The world talks of de-globalisation but the reality is we are all shackled together

When and by how much the Chinese economy recovers depends on not just what’s happening in China itself but what’s happening in other countries as well. According to Pauline, the talk of de-globalisation exists but the reality is that economies remain tied to each, albeit reluctantly. “We are shackled together,” she said.

“The government of China has started to unwind its measures to contain the pandemic but simply allowing people to go to work does not mean that Chinese growth will automatically get back on track,” Pauline said.

In the GDP projections by both the IMF and the World Bank, China is the only one among major economies to make it into positive growth in 2020 and 2021. However, Pauline cautions that the various forecasts are based on varying levels of assumptions each with their respective butterfly effects. 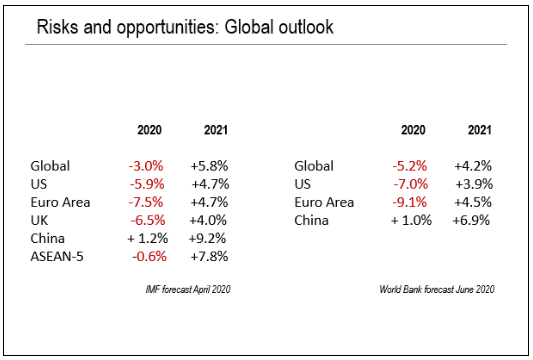 Domestic consumption as an engine of growth for China is often misunderstood, Pauline pointed out. There is the argument that because the consumption’s share of the Chinese economy is large and growing, it must, therefore, be replacing investment and productivity as the top engine of growth.

However, size is always just a part of the story. The notion of consumer spending driving growth is the result, and not the cause of a productive, healthy economy. “Efficient investment and productivity generate the wealth that spurs the consumption, that in turn, spurs investment in a virtuous cycle of growth,” she said.

To drive her point, Pauline revealed how Chinese private consumption in 1962 accounted for 71.3% of its economy but did not push growth as the GDP shrank 5.7% that year. She then presented current figures for the Chinese economy. 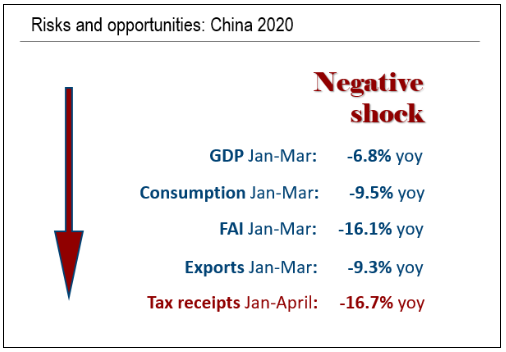 According to her, the one-stop indicator of a country’s economic pain is the government’s tax receipts, which in China’s case, fell 16.7% year-on-year in the first four months of 2020. The effect was felt throughout China’s 31 provinces and regions: Guangzhou province, normally the nation’s best performer, saw its GDP fall 6.7% while Hubei province suffered a catastrophic 39.2% drop in GDP.

The International Monetary Fund (IMF) is forecasting a 1.2% growth for China while the World Bank has forecasted 1.0%. “Interestingly, the Chinese government itself was less confident than the IMF or the World Bank that growth could even get back to positive territory by the end of this year,” said Pauline.

During the National People’s Congress meeting on 20 May 2020, part of Chinese premier Li Keqiang’s work report presentation included the announcement that the government would not be setting a GDP target for 2020. This was a departure from a decades-old tradition of setting parameters for lower-level governments in their economic plans for the economy. In a command economy like China, official targets guide decisions on investments, trade and even monetary policies and are also seen by investors as something to strive for.

The reason behind the Chinese government’s decision to not set a GDP target becomes clear when one looks at premier Li’s list of six priorities for 2020. The list on the left hand side (Six Priorities) displays the six areas with the highest policy priorities while the list on the right hand side (Six Kisses) is a list of sectors that would require what the Chinese government calls “stabilising.” According to Pauline, the second list was promptly nicknamed the “six kisses” by the people because the Chinese word for stability is identical in pronunciation to the word “kiss.” 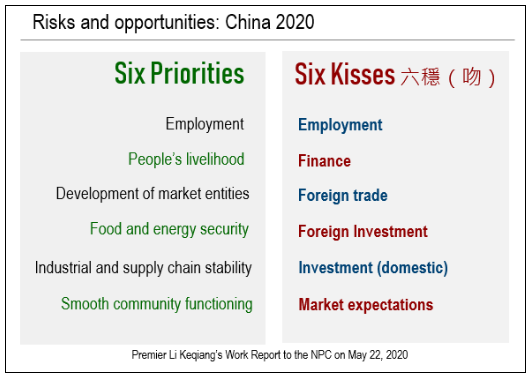 As can be observed from the last item under the Six Kisses list, managing market expectations may have something to do with the way the Chinese government has been acting this year, i.e., not setting a GDP target for 2020 and playing up the economical challenges facing the nation instead of playing them down. “By emphasising the many areas of the economy that needs fixing, Beijing is dampening expectations of a quick rebound. If growth this year chips into the negative, markets will take it in stride. There would be no mad rush for the door by frightened investors,” said Pauline.

“If on the other hand, growth manages to eke into the positive territory, everyone with exposure to China will be congratulating themselves. So dampening expectations is a PR win-win [for China].”

Since it is already halfway through the year, Pauline said businesses should forget 2020 as the chances of a meaningful recovery for the Chinese and global economy is slim. The global economy has been under lockdown for months and only just reopening. People in China, in the US, in Europe, people around the globe are concerned and therefore are not spending or investing. The return of confidence will take time.

“Even though Chinese numbers in the coming months may launch headlines, the real turning point in terms of business opportunities in China is in 2021,” she said.

Reasons to look to 2021 for China’s economic recovery:

Given the political imperative for a good show in 2021, Pauline is of the opinion that the odds are very good for a robust rebound for the Chinese economy next year.


a. ASEAN sells itself short

The many advantages of ASEAN such as a young demographic, third-largest labour force globally and the potential consumer market of 650 million are well-known. The region was also the fifth-largest economy in 2019, with a combined GDP of US$3 trillion. 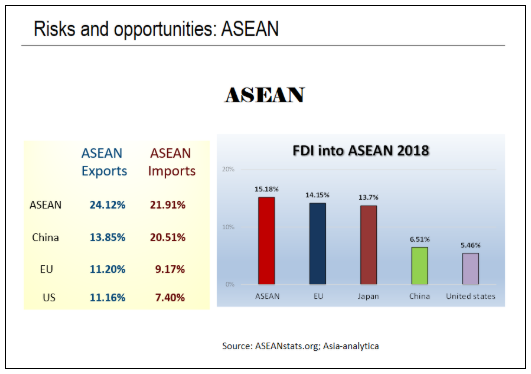 b. The region looks set to emerge from the pandemic better than others

Even though ASEAN countries have been badly hit by the COVID-19 pandemic and some are still struggling to contain it, Pauline believes the region is likely to survive this pandemic better than many other parts of the world.

ASEAN as a group entered into the crisis in relatively good economic shape; its banks are mostly well-capitalised, with low levels of non-performing loans and it has adequate levels of foreign exchange reserves. Things are understandably looking a little grim at the moment due to the pandemic.

Pauline reveals that the outlook for ASEAN for 2021 and 2022 is very positive. “ASEAN has hit a sweet spot amid the turmoil rocking the world. The change in risk perceptions worldwide is driving structural shifts in international trade and commerce and the main beneficiaries of these shifts is ASEAN.”

The three reasons behind Pauline’s positive outlook are:


c. ASEAN needs to leverage its strength as a group in a multi-polar world

The longer-term challenge for ASEAN would be to successfully deal with the tectonic shifts underway in trade finance and global alliance. “Despite the talk of integration, ASEAN is still seen, at least from the outside, as a loose grouping of 10 nations, each with its own priorities, its own bilateral trade pacts, its own approach to security, its own approach, at least initially, to the pandemic,” said Pauline. “As individual players, ASEAN member nations have very little standing but as a group, it could leverage its combined strength for more advantages in a multi-polar world.”

Tan Sri Dr. Munir Majid, Chairman of CARI, agreed with Pauline that ASEAN sells itself short. He noted that ASEAN businesses and joint business councils are currently trying to get the regional bloc to get its act faster during the post-COVID-19 economic recovery phase. A proposal has been made for the setting up of a High-Level Special Commission to speed up the decision-making process in ASEAN.


a. The outcome of the US-China trade war still has a role to play


The consensus is that the world is facing the worst recession outside of wartime in 100 years. The latest data shows that the two key gauges of global trade and manufacturing activity are deep in recession. The real question is, whether we are in a short, sharp shock, or prolonged economic pain?


b. Economic uncertainties should be viewed in the regional, local context


For a question as broad as to how the global economy, comprising 195 countries, will recover, to say “we don’t know” seems quite reasonable. When one looks at the world simply as a market, then all the economic uncertainties should be viewed in context, said Pauline.

“Politics and economics may be global but business is always local. Who trades with 195 countries? The opportunities in Shanghai are very different than that of Beijing and definitely very different from Wuhan,” she further explained.

Those looking to benefit from the Chinese market should focus on the specific risks and opportunities of the city or province they are trading with, or investing in.


c. China will not implode

Pauline pointed out that the real world is not quite as simple or tidy. “Truth is often perched precariously on an ever-shifting continuum. I hold a popular view that the Chinese economy is much less robust than die-hard China investors believe. I think that the slowing growth in recent years are due to structural, not cyclical factors. But this does not leave me to conclude that the Chinese economy is about to implode,” she said.

China is expected to experience a meaningful economic recovery but no earlier than 2021. Even though its government has already deployed unique policy tools unique to a command economy, the effects will only be seen next year. It should be noted, however, that due to the nature of a globalised world, China’s recovery will also depend upon the opening up of other major economies around the world. ASEAN stands to gain once China and the global economy recovers if it could leverage its strength as a group in relation to supply chain diversification, its advantage as a neutral investment destination and a China Plus One model for manufacturing supply chain.