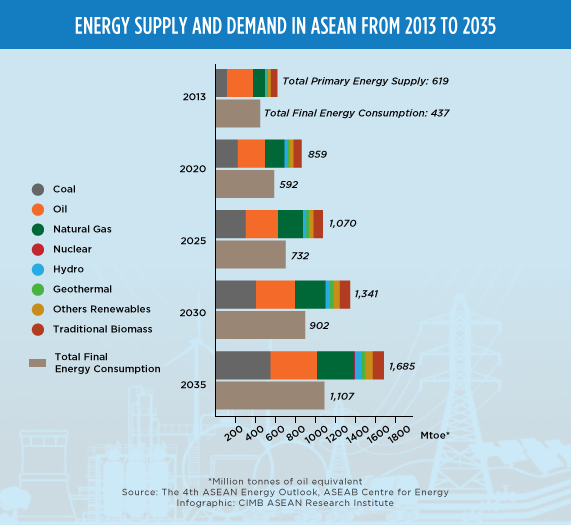 ASEAN Council on Petroleum meet in Vietnam
(19 May 2017) The ten members of the ASEAN Council on Petroleum (ASCOPE) agreed to boost cooperation when they convened for their 83rd national committee meeting in Vietnam. The participants agreed to promote the reuse of waste catalysts in refineries, upgrade and expand refineries, optimise the model of heat exchanger cleaning and rank the optimal level of operating capacity. ASCOPE also agreed to enhance an emergency response system for gas shortages to address possible energy security emergencies in ASEAN. The Council will also continue developing guidelines for decommissioning the region’s substantial stock of ageing offshore oil and gas infrastructure.

Vietnam to approve US$7.5 billion coal-fired power plants
(24 May 2017) Vietnam’s investment minister Nguyen Chi Dung said that the country is set to grant investment licenses for three coal-fired power plants worth a combined US$7.5 billion in June. The projects will be undertaken by Japanese, South Korean and Saudi Arabian investors. The projects are expected to be operational by 2021 and 2022 respectively. While Vietnam aims to boost renewable energy output, it has been mostly reliant on coal-fired and hydropower plants to meet its annual electricity demand growth of around 11 percent.

Manufacturers moving out of Malaysia
(22 May 2017) Some multinational corporations are leaving Malaysian shores citing a difficult operating environment as the reason for their departure. The Federation of Malaysian Manufacturers said that the new regulations including the Employee Insurance Scheme, Employee Mandatory Commitment, mandatory health checks for foreign workers, the energy subsidy rationalisation, the increases in minimum wage as well as increases in logistical charges including depot charges, seal charges and the bill of lading fees, are the increasing costs of doing business. Recently, JTI Bhd, British American Tobacco Bhd, Seagate Technology Plc, and Western Digital Corp have ceased manufacturing operations in the country.

Former secretary-general of ASEAN proposes
(19 May 2017) Former Secretary General of ASEAN, Surin Pitsuwan, said that the 10-member group could play a peace broker role in the ongoing crisis over North Korea’s nuclear weapons program. He said that the ASEAN Regional Forum should appoint a special envoy on the Korean Peninsula. The ASEAN Regional Forum discusses security issues and includes all members of ASEAN and the six-party security talks on North Korea namely U.S., Japan, China, Russia, North and South Korea. He said that the adversary will usually not be the one to make a concession and that an ASEAN envoy could move among the six capitals and help find them common ground, he added.

ASEAN trade ministers attempt to fast-track RCEP
(19 May 2017) In an attempt to facilitate negotiations on the Regional Comprehensive Economic Cooperation (RCEP), ASEAN trade ministers will hold another intersessional meeting in Hanoi. Trade and Industry Secretary Ramon M. Lopez, who is the current chairman of the ASEAN Economic Ministers Meeting, said the 3rd RCEP Intercessional Meeting will take place in Hanoi. The Philippines hosted the 18th RCEP Trade Negotiating Committee (TNC) Meeting and Related Meetings recently but there was no official report yet on what took place during the meetings in Manila. Lopez has also proposed the adoption of the principle of reciprocity to avoid delaying the conclusion of the negotiations.

ASEAN military heads to increase cooperation on terrorism
(22 May 2017) Military chiefs from ASEAN signed the joint statement aimed at improving joint military exercises, humanitarian assistance and disaster relief capacities. The move also seeks to beef up efforts to formalise the ASEAN Chiefs of Defense Forces Informal Meeting (ACDFIM) which first agreed upon at the 12th ACDFIM held in Malaysia in 2015 to become a mechanism to combat the prevalence of violent ideologies and create a coordinated response to non-traditional threats like disasters. Armed Forces of the Philippines public affairs office chief Col. Edgard Arevalo said threats of terrorism, particularly the spread of ISIS-inspired extremism, maritime security concerns, and the onslaught of disasters and calamities became the focus of the meeting and that these inspired the mutual agreement to forge stronger partnerships.

Government launches project to help 15,000 farmer
(24 May 2017) The Cambodian government launched the first phase of a project to help 15,000 farming families commercialise their operations and bring their produce—rice, cassava, chickens and silk—to market. Cambodian Commerce Minister Pan Sorasak said the supply and demand in the country are not balanced— like with vegetables, so they import these goods to fulfil demand. The project, called Accelerating Inclusive Markets for Smallholders, has two components: building infrastructure to help farmers, and offering special micro finance deals, including longer terms and 20 percent government subsidies. The government expects to spend US$60 million on this project.

Singapore’s first quarter GDP shrinks at a lower rate than estimated
(24 May 2017) Singapore’s Ministry of Trade and Industry reported a quarter-on-quarter fall in GDP of 1.3 per cent against an advanced estimate of a 1.9 percent dip. A Bloomberg forecast indicated that there would be a 0.9 percent fall. The manufacturing sector contracted by 1.5 per cent quarter-on-quarter, a sharp fall from the 39.8 percent growth seen in the previous quarter, but smaller than the estimated 6.6 percent drop. In year-on-year terms, the city state’s economy grew by 2.7 per cent in the first quarter, down from 2.9 percent in the previous quarter. The Singaporean government is confident that growth forecast for 2017 will remain between the 1 to 3 percent range.

ASEAN and China agree on framework for code of conduct
(18 May 2017) After a meeting between Chinese and ASEAN officials, China’s foreign ministry said the framework had been agreed upon. However, no further details of the framework were given. The Ministry said that all parties will use the framework of regional rules to manage and control disputes, deepen practical maritime cooperation, promote consultation on the code and jointly maintain the peace and stability of the South China Sea. The framework will be submitted at a meeting of the foreign ministers of China and the ASEAN countries in August 2017. Chinese Vice Foreign Minister Liu Zhenmin also made comments which called on others to stay out, an apparent coded message to the United States.

Aung San Suu Kyi kicks off another round of peace talks
(24 May 2017) Myanmar state counsellor Aung San Suu Kyi is hosting peace talks in the capital city of Naypyidaw in her second attempt to end fighting in the country’s troubled frontier regions. So far, only eight ethnic groups have signed the National Ceasefire Agreement (NCA) which was negotiated by the previous administration. This round of talks will see those signatories as official participants while those who have not signed will only be special guests. Seven groups have refused to sign the ceasefire agreement but have representatives attending the conference including United Wa State Army, Myanmar’s largest non-state armed group, the Myanmar National Democratic Alliance Army (MNDAA), the Shan State Army-North (SSA-N) and the Ta’ang National Liberation Army (TNLA). Many armed groups have complained that Suu Kyi has not listened to their concerns and is working too closely with the military.