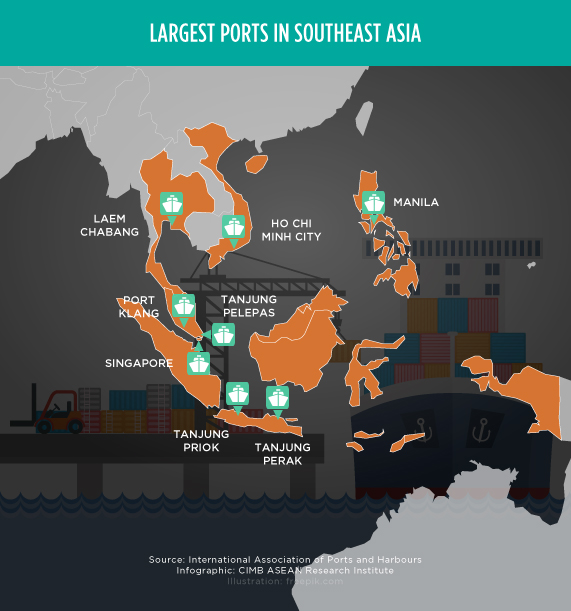 Singapore plans ahead to retain spot as major trade hub
(21 August 2017) Singapore plans to retain its spot as a major trading hub Southeast Asia with the new Tuas Port which will be completed by 2040. The port features deep-water berths to cater to mega vessels and will have the capacity to handle 65 million standard cargo containers per year. However, Singapore faces competition from neighbouring ASEAN countries such as Malaysia, Indonesia and Thailand as they are planning or have begun constructing similar ports. These ports may impact Singapore’s status as a trade hub as new maritime routes may bypass the country.

Indonesian central bank cuts policy rate
(22 August 2017) Bank of Indonesia made a unexpected move by cutting its policy interest rate by 0.25 percentage points down to 4.5%. This was due to the country’s underperformance in the second quarter of 2017. Indonesia’s gross domestic product grew 5.01%, lower than the estimation of 5.1%. Bank of Indonesia Governor Agus Martowardojo said that credit grew less than 3% as of June and the bank downgraded its projection for credit growth from 10%-12% to 8%-10%. He added that the cut is expected to strengthen the intermediation of the banking sector and increase the credit disbursement next year.

Thai GDP showed fastest economic growth in 4 years
(22 August 2017) Thailand showed the fastest economic growth in the past 4 years and is expected to grow further. According to National Economic and Social Development Board (NESDB), Thailand’s GDP grew 1.3% which is 0.3% faster than forecasted and the growth is expected to increase with assistance from strong external demand and loose monetary and fiscal policies. NESDB revised up the country’s 2017 economic growth and export growth forecast to 3.5-4% from 3.3-3.8% and 5.7% from 3.6% respectively.

Southeast Asia’s GDP continues to depend on exports
(22 August 2017) Southeast Asia’s economic growth continues to depend on exports. In the April-June quarter, Thailand’s exports grew 6% with GDP rising to 3.7%, Vietnam and Philippines GDP growth exceeded 6% change to while Malaysia’s GDP rose by 5.8% supported exports in the manufacturing sector and by a 6% growth in the services sector. Infrastructure investment is also propping up growth in Southeast Asia, and is expected to continue in the future.

Turkey-Singapore FTA will begin in early October
(21 August 2017) The Turkey-Singapore Free Trade Agreement (TRSFTA) which was signed in November 2015 will come into full force on 1 October 2017. According to Singaporean Prime Minister Lee Hsien Loong, the FTA is a milestone as both countries are gateways to their specific region. The Ministry of Trade reported that the agreement will reduce barriers to trade and investment, increase access to different markets, improve connectivity and allow Singapore to leverage on Turkey’s regional markets. In the past decade, the bilateral trade between the nations has surpassed US$700 million.

Cambodia to build its first oil field
(23 August 2017) Cambodia signed a deal with a Singaporean energy company to build the country’s first oil field, marking the country’s first step to become an oil-producing nation. KrisEnergy will develop an offshore field in the Gulf of Thailand and is expecting to produce 8,000 barrels per day by 2020. A majority of the project stake at 95% will be held by KrisEnergy while the remainder will be owned by the Cambodian government. Cambodia forecasts that the project will make at least US$500 million in royalties.

Malaysia aims for US$12 billion in halal exports by 2020
(23 August 2017) Malaysia aims to reach US$12 billion in halal exports by 2020 from the current US$10 billion. According to Malaysian International Trade and Industry Minister Datuk Seri Mustapa Mohamed, the ministry is targeting an increase in job opportunities from the industry from about 250,00 to 330,000 jobs. Deputy Prime Minister Datuk Seri Dr Ahmad Zahid Hamidi added that he hopes for the halal industry to cater to 23% of the global Muslim population and beyond as Malaysia has set the highest benchmark for halal products.

Thousands of migrants must leave Thailand
(24 August 2017) Thousands of undocumented migrants from Cambodia are required to leave Thailand as they are ineligible for legal status according to the Thai Labour Ministry. The migrants who were mostly workers were required to register with the Thailand Employment Department for an interview last August and those who did not register or did not pass the interview were required to leave the country. The Employment Department database showed more than 9,000 migrants failed the interview and approximately 800 of them were between the age of 15-18, making them ineligible for legal status. In total, there are more than 223,000 Cambodians are to interviewed.

Malaysian Prime Minister to meet Trump in September
(24 August 2017) Malaysian Prime Minister Datuk Seri Najib Razak is set to meet with United States President Donald Trump in Washington DC on September 12. According to the White House Press Secretary, the meeting will mark 60 years of the bilateral relationship between the two countries and the leaders will discuss ways to further strengthen the bond as well as on issues such as national security, trade and investment.