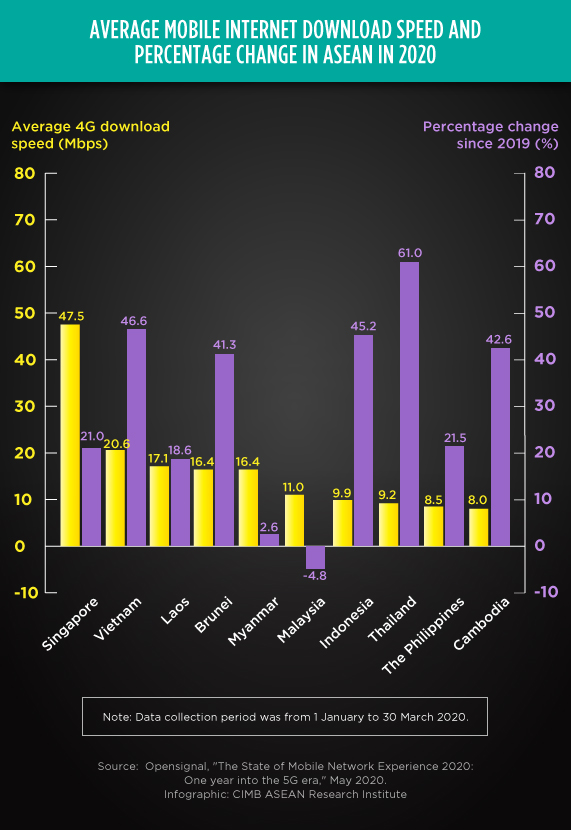 Laos ranks third in ASEAN for average mobile internet speed
(18 May 2020) Laos ranks third-fastest among ASEAN countries in terms of average 4G download speed of mobile internet data, according to a report released by UK-based Opensignal which looked at mobile network experience across 100 countries. Singapore has the fastest download speed of mobile data in Southeast Asia at 47.5 Mbps, followed by Vietnam (20.6 Mbps) and Laos (17.1 Mbps). The global ranking of ASEAN countries are: Singapore (6th), Vietnam (41st), Laos (52nd), Brunei (55th), Myanmar (56th); Malaysia (73rd); Indonesia (80th); Thailand (81st); the Philippines (83rd) and Cambodia (87th). Among ASEAN countries, six of them saw an increase of above 40.0% in download speed with Thailand having the largest increase at 61.0%. Only Malaysia saw a decrease in mobile download speed at 4.8%. Globally, Canada and South Korea topped the ranking of internet speed with an average 4G download speed of 59.6 Mbps and 59.0 Mbps, respectively.

Indonesia to tax internet giants from July 2020
(18 May 2020) Indonesia will require big internet companies to pay value-added tax on sales of digital products and services from July 2020 onwards. The country will impose a 10% VAT on digital products sold by non-resident internet companies with significant presence in the Indonesian market and this includes streaming services, applications and digital games beginning 1 July. Indonesian authorities have previously said services by streaming platforms like Spotify and Netflix would be among those subject to the new tax. According to analysts, the COVID-19 pandemic has heightened a push by governments around the world to tax internet giants, who could see a jump in revenues as people stay at home during global lockdowns. The move by Indonesia could accelerate a wider push in the region as other countries seek to boost revenues following the pandemic.

Fundraising by Southeast Asian-centric funds slows in the first quarter of 2020
(14 May 2020) Fundraising by Southeast Asian venture capitalists in the first quarter of 2020 tripled year-on-year but declined 47% when compared to the previous quarter, according to a report by a regional media company. The funds managed to raise more than US$1.3 billion in the first three months of 2020 but the situation is expected to worsen as the COVID-19 pandemic further affects investors’ risk appetite, said industry stakeholders. In the first quarter of 2020, Singapore and Indonesia achieved total fund closes worth US$983 million and US$161 million respectively, while Malaysia, Thailand, Vietnam and Cambodia recorded no deals. Market observers expect a challenging year for early-stage funds and those without a proven track record.

Ministry says no to halting of petroleum imports
(16 May 2020) The Ministry of Industry and Trade has rejected a proposal that Vietnam stop importing petroleum, saying large domestic inventories cannot negate other factors such as international commitments. Deputy Minister of Industry and Trade Do Thang Hai said at a meeting on 15 May that the proposal by state-owned oil giant Petrovietnam (PVN) for the country to stop importing petroleum was considered very carefully but infeasible based on several factors. All 33 businesses in petroleum import and export have reported difficulties with domestic retail prices having dropped eight times this year. The ministry, however, pointed out that the petroleum industry was not the only one facing similar issues due to COVID-19. Suspending petroleum imports would mean Vietnam prohibiting other countries from exporting, which is a violation of international commitments made in trade agreements and as a WTO member.

ADB to provide US$7.2 million loan for Thai wind-plus-battery project
(18 May 2020) The Asian Development Bank (ADB) told an energy news outlet on 18 May that it will lend US$7.2 million for the construction of the Southern Thailand Wind Power and Battery Energy Storage Project, which is the country’s first private sector initiative to combine the two technologies at scale. The project has added an “integrated” 1.88MWh battery energy storage system (BESS) to an existing 10MW wind turbine power plant. The addition of the BESS is being considered a pilot scheme that has the potential to be replicated and scaled-up elsewhere in Southeast Asia. The project will contribute to Thailand’s Power Development Plan, introduced in late 2018, which aims to source 18% of the country’s energy from renewables, mostly solar, by 2037.

Panasonic to close facility in Thailand and consolidate production in Vietnam
(21 May 2020) Japanese electronics corporation Panasonic plans to close its appliance production facility outside Bangkok, Thailand, by fall 2020 and consolidate its production in a larger facility in Vietnam. The plant in Thailand will stop producing washing machines and refrigerators by September and October 2020 respectively, the building itself will be closed by March 2021. The Thai plant’s 800 employees will be let go. By consolidating production in Vietnam, Panasonic hopes to reduce costs, but it also represents a larger shift of production by Japanese electronics manufacturers away from Thailand due to labour costs. The company currently employs some 8,000 workers in Vietnam.

Indonesia’s current account deficit narrows in first quarter of 2020
(20 May 2020) Indonesia’s current account deficit narrowed to 1.4% of GDP in the first quarter of 2020, down from 2.8% of GDP in the previous quarter. This was attributed to falling imports and the shrinking deficit in services amid the COVID-19 pandemic. While Indonesia’s import value dropped 3.69% in the first quarter to US$39.17 billion, its exports grew 2.91% to US$41.79 billion. This led to a trade surplus of US$2.62 billion. At the same time, financial and capital accounts recorded a US$2.9 billion deficit in the January-March period, compared with the previous quarter’s US$12.6 billion surplus, which was attributed to a jump in capital outflows. Indonesia’s current account deficit for the full year of 2020 is expected to be around 1.81% of GDP versus 2.72% in 2019.

Government to charge 50% of hotel charges for returning Malaysians’ quarantine
(20 May 2020) Malaysia’s Senior Minister for Security Ismail Sabri stated that starting 1 June, Malaysians returning to the country would have to pay 50% of the hotel charges for the mandatory 14-day quarantine. The remaining half of the costs would be borne by the government, for a fixed ceiling rate of US$34.46 per day. Permanent residents and foreigners will be required to pay the charges in full. Both Malaysians and foreigners alike will be required to sign the agreement for payment prior to entering the country. The letters will be issued by Malaysian embassies abroad. Ismail also stated that those under Malaysia’s My Second Home programme will be allowed to enter the country but subject to approval by authorities.