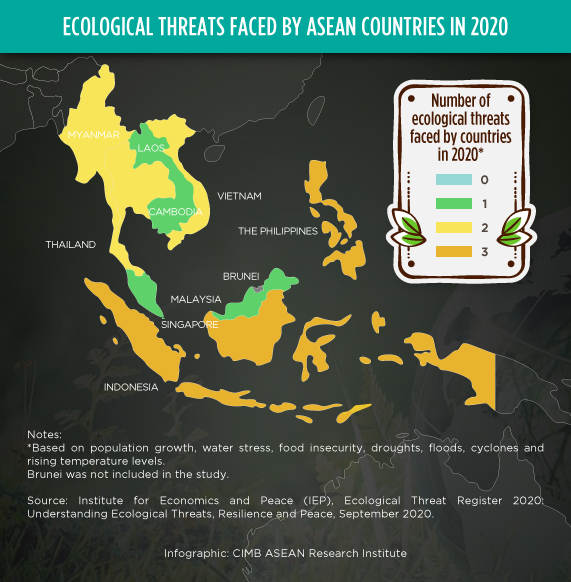 Finance leaders approve increase of “condition free” access to cash swap fund
(21 September 2020) ASEAN+3 finance leaders at the 23rd ASEAN+3 Finance Ministers and Central Bank Governors’ Meeting have approved to increase the “delinked portion” of the US$240 billion Chiang Mai Initiative Multilateralisation (CMIM) cash swap fund from 30% to 40% of borrowing capacity. The meeting was held virtually on 18 September and was co-chaired by Vietnam and Japan. The increase means all 10 ASEAN countries, as well as, Japan, South Korea and China can now access up to 40% of their maximum borrowing amount from the facility without the need for any conditions on the funds provided. Implemented in 2010, the CMIM is a means of addressing balance of payments and short-term liquidity difficulties in the region during times of financial crises; it allows members to access a pool of US dollars in exchange for their own currencies.

Government announces US$2.4 billion additional stimulus
(23 September 2020) The Malaysian government announced that it would implement several initiatives and additional assistance under the US$2.4 billion (RM10 billion) Prihatin Supplementary Initiative Package (Kita Prihatin) in line with its efforts to boost economic recovery. Prime Minister Muhyiddin Yassin said the Kita Prihatin package targets four main groups, namely the bottom 40% income group (B40) who are married and single; M40 group with family and who are single; local workers in various fields and micro-traders in various fields. The package is an extension of previous economic stimulus packages, worth a total of US$70.8 billion (RM295 billion), or about 20% of the nation’s GDP, with an additional fiscal injection by the government totalling US$10.8 billion (RM45 billion). According to Muhyiddin, the latest figures from the Department of Statistics Malaysia revealed encouraging developments in economic indicators, such as the unemployment rate, manufacturing index and consumption index.

Cambodia and Indonesia agree on tax deal
(23 September 2020) Cambodia and Indonesia have reached an agreement on double tax avoidance (DTA), Cambodia’s General Department of Taxation (GDT) said on 22 September 2020. The DTA could take effect as early as 1 January 2020 if the remaining approval procedures are completed in 2020, said the GDT. The agreement is expected to protect nationals from both countries from double taxation. The Indonesian government recently notified the Cambodian government, as obliged by Article 29 of the DTA, that it had completed the internal procedures that are required for the entry into force. An official from the GDT told a local news outlet that the DTA will further shore up bilateral trade and investment between the two countries. Cambodia Chamber of Commerce said that apart from preventing double taxation, the DTA would also allow income tax to be paid wherever individuals or companies make a profit.

Shell to sell its 45% stake in gas-to-power plant in Malampaya
(24 September 2020) Royal Dutch Shell is looking to sell its 45% stake in a gas-to-power plant in Malampaya, a key source of power for the Philippine’s main island of Luzon. Shell’s move is part of its larger portfolio rationalisation initiative to simplify and increase the resilience of its business. Malampaya’s natural gas was discovered by Shell in 1991 and fuels four power plants that deliver about a fifth of the Philippines’ electricity requirements. Shell’s divestment plan comes about a year after Chevron agreed to sell its 45% interest in the project to Philippine oil and shipping group Udenna Corp. State-owned Philippine National Oil Company holds the remaining 10% stake in the Malampaya project.

Trade department confident of retaining GSP+ privileges
(23 September 2020) The Philippines is confident that it can retain tariff perks with the European Union (EU) after the European parliament voted in support of their removal. Trade Secretary Ramon M. Lopez said in an interview on 23 September that the Philippines is currently working on addressing the EU’s concerns by providing them with the right information. Last week, the European parliament asked the European Commission to begin the process of temporarily withdrawing the Generalized Scheme of Preferences Plus (GSP+) privileges enjoyed by the Philippines after the country failed to improve its human rights situation. The Management Association of the Philippines has asked the government to take the matter seriously, noting that the removal of tariff perks would hurt various industries and worsen unemployment.

Reimposed restrictions expected to further hinder revival of domestic consumption
(23 September 2020) Jakarta’s recently reimposed restrictions is expected to further hinder the revival of domestic consumption in Indonesia. The hit to domestic consumption, which contributes about 60% of GDP, is expected to worsen an economy already projected to contract by between 0.6% to 1.7% in 2020. Consumer confidence among Indonesians who spend more than US$339 a month declined, according to a central bank survey carried out in August 2020. As of 11 September 2020, visits to retail and recreational spaces were still 10% lower than before the pandemic started, according to a mobility report by Google. According to Indonesian Retailers Association chairman Roy Mandey, retailers are already dipping into capital reserves to stay afloat. If the pressure on retailers continues, he believes it would just be a matter of time that modern retailers would stop operations, particularly those with smaller business scale.

Singapore implements measures as it moves to reopen the economy
(24 September 2020) Singapore will allow more people to return to office and will be trialling a new business travel pass for senior executives as the city-state moves to re-open its economy. The updated requirements will allow staff to return to the office for up to half their working time, with no more than half of the workplace’s employees at any point in time. The updated measures will take effect on 28 September 2020. The international business travel pass will be for executives with international responsibilities who need to travel regularly. Among the other aspects of the updated measures include allowing the resumption of work-related events within the workplace, allowing cinemas to expand their capacities from 1 October, and an adjustment of the legal cut-off age for children to wear masks.

China’s Great Wall Motors to start automobile production in Thailand in 2020
(24 September 2020) China’s leading automobile manufacturer Great Wall Motors (GWM) will start production in Thailand in 2021, with a capacity for 80,000 units a year. The company will start with the production of sports utility vehicles and pickup trucks. GWM Thailand has a registered capital of US$715.88 million and will employ 3,435 people. The company will also manufacture key parts including batteries and transmissions for its electric vehicles. Locally produced parts will form 45% of parts for its first model to be produced in Thailand, with the proportion to increase to 90% by 2025. The GWM Thailand operation will also establish a research and development hub for Southeast Asia.