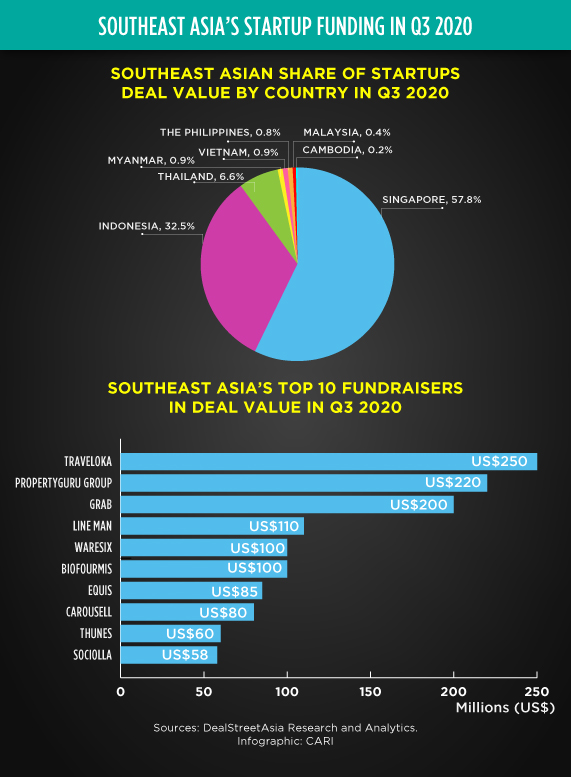 Funding in Southeast Asian startups continues to decline in Q3 20200
(9 October 2020) Investments in Southeast Asian startups declined for the third consecutive quarter in 2020 due to the impact of COVID-19 pandemic on dealmaking and investor sentiment. Startups in the region raised US$1.8 billion in the third quarter of 2020, marking a 40% year-on-year decline and 34% quarter-on-quarter decline, according to the Southeast Asia Deal Review Q3 2020 report. Singapore was the only market in the region to witness a growth in both deal value and deal count, replacing Indonesia, the region’s top investment destination, which saw an almost 50% decline for year-on-year, as well as quarter-on-quarter. Early stage startups in the region, particularly those focused on fintech and healthtech continue to draw interest from investors. Overall startup fundraising in Southeast Asia is expected to remain muted in the near term due to the pandemic.

State of emergency declared in Bangkok amid protests
(15 October 2020) Thailand has declared a state of emergency in Bangkok after tens of thousands of anti-government protesters surrounded the prime minister’s office demanding greater democracy and less power for the monarchy. According to a notification in the Royal Gazette, the emergency declaration, which goes into immediate effect, bans gatherings of five or more people and allows for the arrest of anyone violating the rules. The latest protest is a series of anti-government demonstrations which began in early July 2020. Protesters are calling for the resignation of Prime Minister Prayuth Chan-Ocha and curbs on the monarchy, such as prohibiting the king from endorsing any coups and revoking laws that criminalise insults against the king and top members of the royal family. Anger in Thailand has also been exacerbated by the economic impact of COVID-19 which is even greater than in other parts of Southeast Asia because of the importance of tourism to its economy.

Singapore expected to add about US$73.5 billion of fiscal stimulus
(15 October 2020) Singapore is seeking to add US$73.5 billion worth of fiscal stimulus to help strengthen an economy expected to contract by 5.0% to 7.0% in 2020. The Singaporean government will use its budget in early 2021 to deliver more support to the battered economy. Government measures so far this year have focused on helping cushion businesses and consumers from the impact of the global COVID-19 pandemic. The Monetary Authority of Singapore has warned that fiscal measures will be crucial in supporting the economy as central banks have little room left to navigate with regards to cutting interest rates or buy back bonds.

BI keeps rates steady as it focuses on alternative measures to shore up economy
(13 October 2020) Indonesia’s central bank, Bank Indonesia, kept its policy rates steady at 4% on 13 October, as expected by 23 out of 25 economists surveyed by a news agency. The Indonesian government plans to use alternative measures such as government bond purchases to help finance stimulus measures, as well as easing banks’ reserve ratio requirements and liquidity rules. Direct bond purchases will remain a one-off policy in 2020, according to the central bank’s governor Perry Warjiyo. Bank Indonesia has directly purchased some US$15.6 billion in government securities this year. There may be room for further rate cuts amidst subdued inflation and growth, with inflation expected to ease below the lower end of the central bank’s target range of 2.0% to 4.0%.

Merger of Islamic units of state-owned banks to form entity worth US$15 billion
(13 October 2020) Indonesia’s planned merger of the Islamic units of state-owned lenders such as PT Bank Mandiri, PT Bank Negara Indonesia and PT Bank Rakyat Indonesia is expected to create an entity with US$15 billion worth of assets. By 2025, the merged entity’s assets could reach US$26 billion. The vice president director of Bank Mandiri, Hery Gunardi, stated that the merged bank would help raise Indonesia’s profile in the global Islamic banking industry, and the merged entity will look at global sukuk (Islamic bonds) that can be sold in the Middle East. Indonesia has been planning on creating a mega-Islamic bank since 2015. PT Bank BRISyariah will be the surviving entity of the current deal, which is expected to be completed by February 2021.

Jobless rate remains at 4.7% in August 2020
(13 October 2020) Malaysia’s unemployment rate remained at 4.7% in August 2020, according to the Department of Statistics Malaysia. The latest labour force statistics showed that the number of those unemployed decreased marginally by 3,500 persons to 741,600 in August compared to July 2020. The resumption of more economic activities from July 2020 was reflected in the continued rise in employment, particularly in the tourism, education, arts, entertainment and recreational sectors, said chief statistician Mohd Uzir Mahidin. The employment-to-population ratio, which indicates the ability of an economy to create employment, was 65.2% in August compared to 64.9% in July. The labour force in August numbered 15.90 million compared to 15.82 million in July. Although Malaysia’s labour force situation showed improvement in August, the continuous improvement will depend on the COVID-19 situation in the country, said the chief statistician.

Government begins national ID system registration
(13 October 2020) The Filipino government began the process of registering millions of citizens for its national identification system on 12 October 2020, to promote electronic payments and make it easier for low-income earners to access financial services. Officials from the Philippines statistics agency will visit homes to collect personal information, hoping to complete the process before President Duterte’s term ends in June 2022. The system is expected to begin operations in the second half of 2021. All Filipino citizens and foreign residents will be required to register such information as name, sex, date of birth, place of birth, blood type, address and nationality. The country’s current system, in which different agencies issue their own numbers, has been criticised as inconvenient. The new system will grant each person a unique number that can be used across agencies.

Lao tourism operators slash prices to attract local travellers
(15 October 2020) Tour and hospitality business operators in Laos have massively cut the cost of their services and package tours and are offering special promotions targeted at local visitors in a bid to make up for the absence of foreign tourists during the COVID-19 pandemic. According to Luang Prabang province’s president of the Chamber of Commerce and Industry, Bounthieng Soulivan, some businesses have reduced the cost of their services threefold or more. “Some hotels that previously charged US$200-500 for a room have reduced the rate to just US$70-80,” he said, adding that such a huge drop in price was unprecedented. There have also been additional attractive offers such as free pick-up services to and from airports. The changes are being made to enable businesses to survive at a time when tourism has been virtually wiped out by the pandemic, resulting in millions of dollars in lost revenue.