Home / News & Views / CARI Captures 476: Malaysia’s COVID-19 fatality rate among the lowest in the region despite rise in number of cases

CARI Captures 476: Malaysia’s COVID-19 fatality rate among the lowest in the region despite rise in number of cases 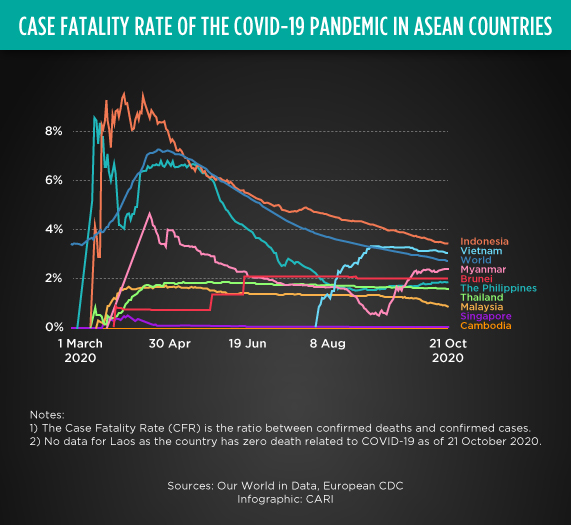 Malaysia’s COVID-19 fatality rate among lowest in the region despite rise in cases
(19 October 2020) Malaysia’s COVID-19 fatality rates are much lower compared to other countries globally despite recording higher number of deaths recently, according to health experts. Universiti Malaya (UM) department of social and preventive medicine Dr Moy Foong Ming said Malaysia’s statistics are on the low side compared to total COVID-19 deaths and case fatality rate (CFR) in other countries and the global trend. As of 21 October 2020, Malaysia’s CFR was 0.9%. According to the Our World in Data COVID-19 dataset, in the ASEAN region as of 21 October, Singapore recorded the lowest CFR with less than 0.1% while Indonesia recorded the highest CFR at 3.5%. The global CFR rate stood at 2.8%. UM epidemiologist Dr Awang Bulgiba said that Malaysia’s CFR in June was around 1.4% and has now fallen to 0.9% due to the much larger increase in the number of cases.

Demand for green bonds expected to remain strong despite COVID-19 setback
(20 October 2020) The strong growth of the green bond market is expected to continue, especially in the ASEAN region, said Climate Bonds Initiative’s ASEAN programme manager Cedric Rimaud. He expressed confidence in the green debt issuance market even though the number of issuances declined by 26% in the first half of 2020 to US$91.6 billion. According to him, ASEAN markets are strong in terms of accessing capital to finance and with regulators fully supporting and governments making progress in sovereign securities. In 2019, global green bond and loan issuance rose by more than 50% to US$258 billion from 2018. In ASEAN, the total issuance size almost doubled to US$8.1 billion in the same period. Singapore accounted for 55% of ASEAN’s green debt issuance in 2019, posting a 29% increase from 2018. While investing in green bonds may not pose high risk, analysts say caution should be exercised and warned against the risk of green washing.

Singapore Airlines to restart flights to New York in November 2020
(20 October 2020) Amid “early signs of optimism” of a recovery in air travel, Singapore Airlines (SIA) said on 20 October that it will resume its flights to New York. The nonstop thrice-weekly flights between Changi Airport and New York’s John F Kennedy airport will start on 9 November. SIA anticipates significant cargo demand from a range of industries based in the New York metro area, including pharmaceuticals, e-commerce and technology firms. The airline said it will continue to review its operations to the US, and “assess the growing demand for air travel amid the ongoing recovery from the COVID-19 pandemic”, before deciding to reinstate services to other points in the US. The airline currently operates nonstop services to Los Angeles. For SIA, the resumption of international traffic is much more crucial as they have no domestic networks to fall back on.

Vietnam Airlines to increase number of domestic flights
(20 October 2020) Vietnam is set to raise the number of domestic flights to meet increasing demand, said a representative of the national flag carrier. Vietnam Airlines will increase the number of flights between Hanoi and province of Dien Bien to 14 per week starting from 26 October while routes linking Ho Chi Minh City with the Kien Giang and Ca Mau provinces will see seven flights per week served by the airline’s affiliate Vietnam Air Services (VASCO). In the first nine months of 2020, Vietnam Airlines reported a 12% increase in domestic passengers compared to the same period in 2019. Meanwhile, Vietnam Travel Aviation Company Limited is set to become Vietnam’s sixth airline once the Ministry of Transport issues an air transport business licence for it. It is expected to make its first flight on 18 December 2020 and in the short term, will fly domestically.

Stakeholders push for wider travel bubble between Singapore and Johor state
(22 October 2020) Stakeholders in the Malaysian state of Johor are pushing for the government to free up border travel with Singapore to allow the state’s economy to pick up again. As of now, both Malaysia and Singapore have established the Reciprocal Green Lane (RGL) and Periodic Commuting Arrangements (PCA), which critics have claimed is limited in scope and has stifled cross-border movement. The Federation of Malaysian Manufacturers (FMM) stated that both countries needed to find a way to facilitate the 250,000 travellers who used to commute daily from Johor to Singapore before COVID-19 struck. It was suggested that a “targeted travel bubble” with strict SOPs for Johoreans who want to commute to Singapore daily for work be implemented.

The Philippines lifts ban on foreign travel
(21 October 2020) The Philippines lifted a ban on non-essential foreign trips by Filipinos on 21 October, but the immigration bureau said the move did not immediately spark large numbers of departures. The government has gradually eased travel restrictions to support the economy, which slipped into recession in the second quarter of 2020 following months of lockdown and quarantine to fight the COVID-19 pandemic. Those who travel to other countries are required to show confirmed two-way tickets, travel and health insurance, a declaration acknowledging the risks of travel and trip delays, and a negative COVID-19 test within 24 hours of departure. Nevertheless, aside from the pre-departure requirements, many countries still restrict the entry of travellers from nations with a high number of COVID-19 infections, including the Philippines.

Petronas to cut jobs at Yetagun offshore gas field in Myanmar
(21 October 2020) Malaysian state-owned oil and gas company Petronas acknowledged that there have been job cuts at its Yetagun offshore gas field in Myanmar as part of its review of its business portfolio. The job cuts started in the first week of September 2020, with further reductions expected in December 2020 and March 2021. Petronas has been engaging with the relevant authorities in Myanmar, including the host authority, Myanmar Oil and Gas Enterprise (MOGE) in order to share its plans. Compensation has been arranged for the retrenched workers in accordance with Myanmar’s labour laws. According to a local daily, the Yetagun field produced nearly 300 million standard cubic feet (mmscf) per day at its peak, but has now curtailed production to only 60 mmscf per day. Petronas holds a 40.9% stake in the gas field, and currently operates it.

House prices rose 0.8% quarter-on-quarter in Q32020
(23 October 2020) Singapore house prices rose 0.8% quarter-by-quarter in the third quarter of 2020, which ended 30 September. With a second consecutive quarter of growth, analysts have revised their forecasts and now believe house prices are expected to rise by as much as 1.5% in 2020 (the prices were previously expected to decline by as much as 6.0%). The rise in home prices comes on the back of home sales rising to its highest in more than two years. This rise in home prices is reportedly due to low-interest rates available and the more than US$74 billion of stimulus provided by the government.