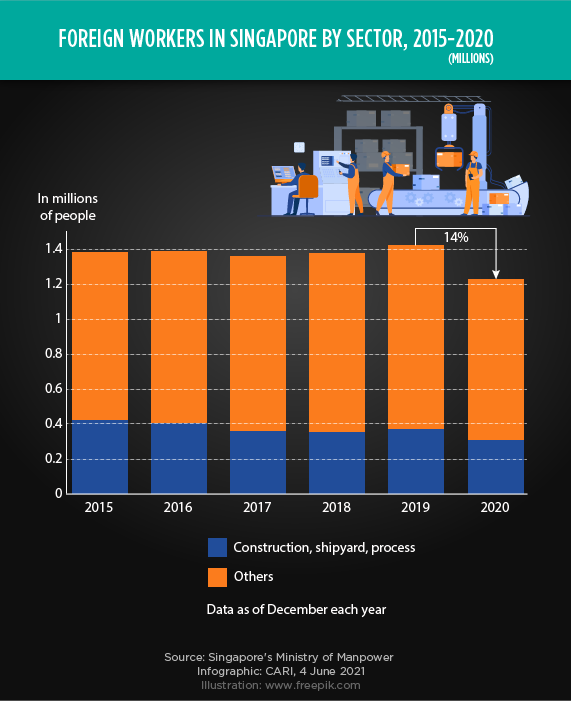 SINGAPORE
COVID-19-induced border closures from South Asia causing labor shortages in Singapore
(01 June 2021) The COVID-19 induced border closures with South Asian countries have caused labor shortages in Singapore, particularly in sectors which depend on low cost labor such as construction and shipping. Even before the authorities had prevented entries from India in late April 2021, and subsequently other South Asian countries in early May 2021, tighter travel rules were already keeping workers away. The labor shortage has caused construction projects to be delayed by as much as a year, pushed up labor wages by up to 30%, and have forced many laborers to undertake higher workloads. In 2020, the number of foreign workers working at building sites, shipyards, and factories plunged 16% year-on-year to 311,000, while the total number of international workers dropped by 14% year-on-year to reach 1.23 million. While the government has maintained its annual growth outlook for 2021 at 4% to 6%, versus last year’s 5.4% contraction, they noted the recovery could be uneven across different sectors and industries.

INDONESIA
Indonesian government to stick to promise of narrowing budget deficit to less than 3% of GDP by 2023
(31 May 2021) The Indonesian government intends to stick to its pledge of reducing its budget deficit to less than 3% of GDP by 2023, despite the fiscal uncertainty caused by the COVID-19 pandemic. The Indonesian Finance Minister stated that the government would be able to reduce its budget deficit to as low as 2.71% of GDP in 2023, from 5.7% in 2021 and 4.5% to 4.85% in 2022. The deficit ratio is expected to go down steadily, to as low as 2.6% by 2025. Indonesia’s efforts in fiscal consolidation has been complicated by a fresh spike in COVID-19 cases. The Finance Minister stated that the government can make spending more efficient and tap new funds like the sovereign wealth fund to bring in more equity financing instead of relying on debt financing. New taxes may also be introduced.

MALAYSIA
Malaysia’s wealthiest saw their combined wealth jump by 14% in 2021
(04 June 2021) According to Forbes, Malaysia’s wealthiest saw their combined wealth jumped from US$79 billion in 2020 to US$90 billion in 2021, an increase of 14%. This was largely attributed to Malaysia’s dominant position as a major exporter of gloves to the world. During the pandemic, demand for protective gear increased significantly, causing Malaysian's exports of rubber gloves to doubled. Sugar baron Tan Sri Robert Kuok remains the richest Malaysian, with a fortune of US$12.2 billion. Tan Sri Quek Leng Chan, second-generation head of the privately-held Hong Leong Group, remains at No 2 with US$9.6 billion. Seven individuals from the 2020 list dropped out in 2021, including AirAsia duo, Tan Sri Dr Tony Fernandes and Datuk Kamarudin Meranun, due to the effects of the pandemic on the travel industry.

THAILAND
Thai government approves US$4.5 billion in stimulus measures to counter impact of new COVID-19 wave
(01 June 2021) The Thai government approved a package of economic stimulus measures totalling US$4.5 billion to counter the impact of Thailand’s most recent COVID-19 wave. The measures include cash handouts, co-payments, and cash rebates, and are expected to be implemented starting on 01 July 2021. Thailand’s economy is facing headwinds from its most recent COVID-19 wave, which has totaled more than 130,000 cases since it began in Bangkok in April 2021. The Governor of the Bank of Thailand stated on 31 May 2021 that the Thai economy may not return to its pre-pandemic growth levels until early 2023. Thailand’s most recent packages will be financed through borrowing under a US$32.0 billion program approved in April 2020.

JAPAN
Household spending in Japan jumps by 13% year-on-year in April 2021
(04 June 2021) According to Japan’s Ministry of Internal Affairs, household spending in Japan rose by 13% year-on-year in April 2021, as consumers got a temporary reprieve from COVID-19-related restrictions, as well as due to the low baseline figures in 2020. On a seasonally adjusted basis, outlays rose 0.1% from a month earlier, a third month of improvement indicating staying consumer demand despite on-again-off-again COVID-19 related restrictions. It is believed that consumer spending could soften again in May and June 2021 amid a renewed state of emergency that had been extended through the middle of June 2021.

CHINA
China reimposes COVID-19-related travel curbs on Guangdong province following spike in infections
(31 May 2021) On 31 May 2021, China reimposed COVID-19-related travel restrictions on Guangdong province following a recent spike in infections. Under the restrictions, anyone leaving the province must be tested for COVID-19 and present results within the past 72 hours. Provincial authorities also stated they would set up testing centres for truck drivers along major roads. The government of the provincial capital, Guangzhou, ordered mass testing after locally acquired infections were found beginning on 21 May. China on the whole has relaxed restrictions on domestic travel after the Chinese government declared the virus under control in March 2020.