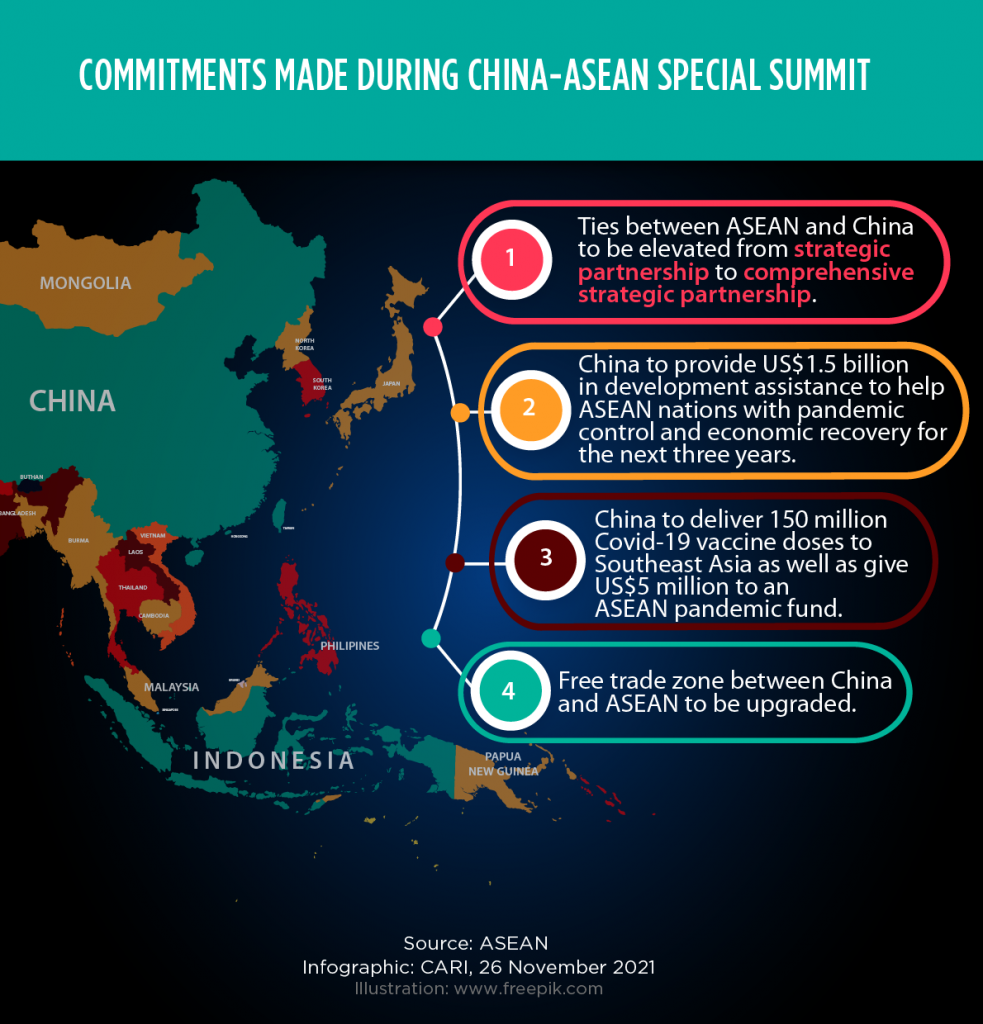 ASEAN, CHINA
China pledges to upgrade relations with ASEAN from strategic partnership to comprehensive strategic partnership
(22 November 2021) During the recent China-ASEAN Special Summit to Commemorate the 30th Anniversary of ASEAN-China Dialogue Relations held on 22 November 2021, Chinese President Xi Jinping announced that ties between China and ASEAN would be raised from strategic partnership to comprehensive strategic partnership, with more focus to be made on security cooperation and development funding. Among the commitments made during the summit included a pledge by China to provide US$1.5 billion in development assistance to help ASEAN nations with pandemic control and economic recovery for the next three years, as well as a pledge to deliver 150 million COVID-19 vaccine doses to the region as well as give US$5 million to an ASEAN pandemic fund. The free trade zone between China and ASEAN would also be upgraded, and more advanced technologies transferred to ASEAN from China.

SINGAPORE
Singaporean government projects growth of 3% to 5% for 2022 as borders reopen and restrictions are loosened
(24 November 2021) On 24 November 2021, Singapore’s Ministry of Trade and Industry projected in its quarterly economic update that the Singaporean economy would grow by 3% to 5% in 2022, as borders reopen and domestic restrictions are loosened. It also predicts that the economy will expand by around 7% in 2021. The ministry stated that the recovery of the various sectors in 2022 is expected to be uneven, with the aviation and tourism sectors expected to recover gradually. The economy also expanded by 7.1% year-on-year in the three months to September 2021, supported by manufacturing and a rebound in the services sector. Authorities warned however of downside risks, such as the uncertain COVID-19 situation, China’s economic slowdown and protracted global supply chain disruptions.

INDONESIA
Indonesia to consider banning tin exports in 2024 to attract investments into domestic resource processing industries
(24 November 2021) The Indonesian government is considering banning tin exports in 2024 in order to attract investments into the domestic resource processing industry, and to improve the country’s external balance. The government is also considering banning the export of bauxite in 2022 and copper ore in 2023. The Indonesian President, Joko Widodo, had made previous public remarks stating that the country is too dependent on the export of raw commodities, depriving it of revenue and jobs in the manufacturing industry. He stated that stopping the export of raw commodities and attracting investment in downstream industries will improve Indonesia’s trade and current account balances. Indonesia has already banned the export of nickel in order to attract investments in the manufacture of electric car batteries.

MALAYSIA
Malaysian state of Sarawak to hold state election on 18 December 2021
(24 November 2021) Malaysia’s largest state of Sarawak will hold state elections on 18 December 2021, with votes to be cast for 82 state assembly seats. Nomination day will be held on 6 December, while early voting will start on 14 December. The Sarawak poll result could influence the timing and outcome of Malaysia’s next general election that’s due before July 2023. This comes as the ruling coalition won 21 out of 28 seats in the recent state elections in Malacca. While there are concerns that the local elections may put Malaysia at risk of a renewed surge in COVID-19, Malaysia’s rapid vaccination progress may prevent a repeat of a nationwide lockdown. As of 24 November 2021, some 77% of the population have been fully vaccinated.

MALAYSIA, SINGAPORE
Malaysia and Singapore to reopen causeway linking both countries starting on 29 November 2021
(24 November 2021) Malaysia and Singapore have agreed to reopen the causeway linking both countries starting on 29 November 2021, allowing cross-border land travel for the first time since March 2020. Vaccinated passengers will be allowed on designated buses between Singapore and Malaysia’s southernmost city of Johor Bahru. As many as 2,880 people a day will be allowed to travel between the countries in the initial phase of the causeway reopening, with the quota to be reviewed weekly. Initial priority will go to people who have been working in either country to visit their families, while eligibility to be expanded over time to general travellers. Singapore was Malaysia’s largest source of tourists in 2019 at 10 million arrivals, while some 1.2 million Malaysian tourists visited Singapore in the same year.

THE PHILIPPINES
IKEA opens largest branch in the world in Manila, hopes to pull in 7 million shoppers in first year of operation
(25 November 2021) Swedish home furnishings multinational IKEA opened its first outlet in the Philippines, and its largest branch in the world, in Manila on 25 December 2021. IKEA plans to pull in 7 million shoppers in its first full year of operation, and plans to open other branches in the country. The new outlet can accommodate up to 8,000 people, but for now capacity will be held to half that to maintain physical distancing. Sales of home furnishings in the Philippines are expected to reach US$4.6 billion by 2023, up from US$3.5 billion in 2020, a year that saw sales decline by 16.4% due to COVID-19-related restrictions. IKEA stated they intend to keep prices low despite ongoing global supply chain challenges and high electricity costs in the Philippines.

THAILAND
Government to hand out US$4.7 billion in handouts to Thai farmers impacted by COVID-19 and floods
(24 November 2021) Thailand’s government plans to hand out US$4.7 billion in cash handouts to Thai farmers impacted by COVID-19, floods, droughts, and poor crop prices. The Thai Cabinet will consider a program to allocate US$4.7 billion to growers of rice, rubber, palm oil and other crops at a meeting on 30 November 2021. The money will be transferred to the accounts of eligible farmers through the Bank for Agriculture and Agricultural Cooperatives. The payments will be used as price-support measures for rice, rubber and palm oil as well as to prevent distress sales of agricultural produce. Flooding in October and November 2021 caused extensive damage to the Thai rice industry, and it is believed the money for farmers will help Thailand’s nascent economic recovery.

NEW ZEALAND
New Zealand’s central bank raises interest rates for second straight month due to rising inflation
(24 November 2021) The Reserve Bank of New Zealand (RBNZ) lifted interest rates for the second straight month since October 2021 due to inflationary pressures and a resumption of economic activity due to a loosening of COVID-19-related restrictions. The central bank raised the official cash rate (OCR) by 25 basis points to 0.75% in the final policy meeting of 2021, pointing to a need to maintain price stability and support maximum sustainable employment. The central bank also stated that further stimulus measures in the future may force the interest rate to be raised above its neutral rate. Large amounts of fiscal and monetary stimulus injected in response to the COVID-19 pandemic have helped New Zealand’s economy recover strongly and pushed inflation to its highest and the jobless rate to its lowest in over a decade. Annual inflation hit 4.9% in the third quarter, the fastest pace in more than a decade while the jobless rate fell to 3.4%, matching its lowest on record from December 2007.

AUSTRALIA
Retail sales surge by 4.9% month-on-month in October 2021, representing largest rise since November 2020
(26 November 2021) Retail sales in Australia surged by 4.9% month-on-month in October 2021, being the largest rise since November 2020. Retail sales rose by 1.3% month-on-month in September 2021. This comes as protracted lockdowns have started to be eased, helping build momentum for the economy for the final quarter of 2021. The Australian central bank is expected to hike interest rates sooner than later, on the wave of strong consumer spending, high job vacancies, and firms boosting investment intentions. The central bank predicts a 5.5% expansion in 2022, but expects core inflation to reach the 2.5% midpoint of the central bank’s target in late-2023. Retail sales in New South Wales surged by 13.3% in October 2021, while in Victoria it rose by 3%.

JAPAN
Wages hikes occur across industries in Japan as economy recovers from COVID-19 pandemic
(26 November 2021) Wage hikes are occurring across different industries in Japan after the country lifted its monthslong COVID-19 state of emergency at the beginning of October 2021. This comes as Japanese Prime Minister Fumio Kishida touts higher subsidies for companies that pay workers more, part of his declared goal of balancing economic growth and wealth distribution. About 20 million people across Japan work temporary or in part-time jobs, and are now increasingly in demand as companies in the auto and food service industry struggle to find workers as they resume operations. Japan is also reportedly to allow foreign nationals working in farming, food service and other sectors to remain in the country indefinitely as soon as next fiscal year.