CARI Captures Issue 531: Grab lists on Nasdaq after SPAC merger at a US$40 billion valuation 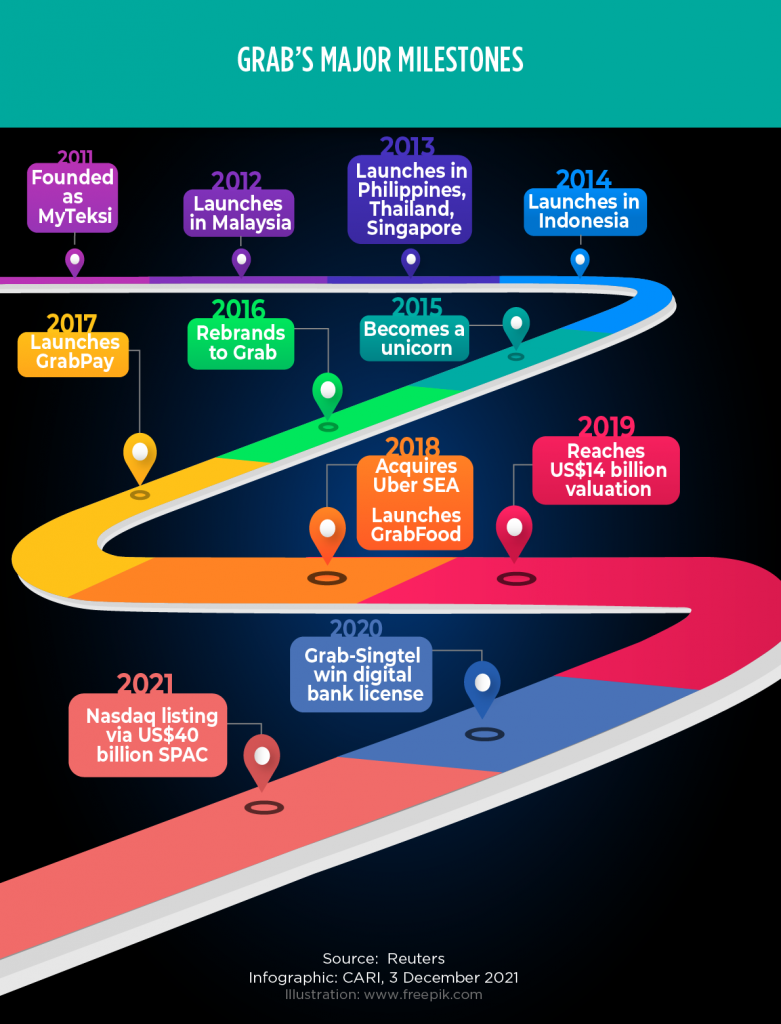 ASEAN
Grab lists on Nasdaq after SPAC merger at a US$40 billion valuation
(2 December 2021) Southeast Asia’s largest ride-hailing and delivery “super app” began trading on Nasdaq on 2 December 2021 under the ticker symbol “GRAB” after completing a US$40 billion merger with a special purpose acquisition company (SPAC). The merger with Altimeter Growth Corp, said to be one of the biggest SPAC transactions to date, was first announced in April 2021 and approved by Altimeter’s investors on 30 November 2021. The company will receive a cash injection of US$4.5 billion as part of the deal. Grab debuted with an opening price of US$13.06 and rose as much as 21% in opening trades before retreating to close at US$8.51 on its first day of trading.

ASEAN
Governments respond to new COVID-19 variant
(1 December 2021) ASEAN governments have heightened precautions in response to the new Omicron variant which is said to potentially be more transmissible. Singapore is pausing vaccinated travel lane launches and will now require travellers arriving at or leaving from Changi Airport to undergo a PCR test. Indonesia has increased its quarantine period to 10 days and placed temporary bans on foreign nationals who visited high-risk countries in the past two weeks. Malaysia will temporarily ban the entry of travellers from countries who have reported Omicron cases or are considered high risk. The Philippines has banned travellers from 14 countries in Africa and Europe, while Vietnam has halted flights to and from seven African countries.

SINGAPORE, MALAYSIA
Singapore, Malaysia launch land vaccinated travel lane
(29 November 2021) Malaysia and Singapore launched their land and air vaccinated travel lanes (VTLs) on 29 November 2021 for citizens, permanent residents, and long-term pass holders of either country. The land VTL could also open to general travellers in mid-December as both sides plan to gradually expand access. In light of the Omicron variant, Malaysia now requires travellers from Singapore to self-test on the third and seventh day after entering the country and report their results via the government’s COVID-19 tracing app. This comes in addition to the VTL’s standard pre-departure and arrival tests, though travellers need not undergo quarantine.

CAMBODIA, THAILAND
Bangkok Airways resumes flights to Phnom Penh
(2 December 2021) Cambodia welcomed its first flight from Thailand this week as both countries look to ease border controls, resume air travel and revive tourism. Thailand opened its borders to fully vaccinated Cambodians on 31 October 2021. Cambodia also hopes to resume flights between Siem Reap and Bangkok in the near future as it pushes ahead with plans to reopen its borders to fully-vaccinated foreign visitors despite concerns over the Omicron variant, safe for temporary bans on a few African countries. Bangkok Airways has also suspended food and beverage services on its flights and made mask-wearing mandatory.

MALAYSIA, SINGAPORE
Malaysia, Singapore sign RTS Link Grantor Agreement
(29 November 2021) The Johor Bahru-Singapore Rapid Transit System (RTS) is now one step closer to reality following the signing of the Link Grantor Agreement by the countries’ respective transport ministries. The RTS is a cross-border rail link that will travel between a station at Woodlands North in Singapore and a station at Bukit Chagar in Johor Bahru. Each one-way journey is expected to take approximately five minutes, with passenger service starting by the end of 2026. The RTS link will have a capacity of up to 10,000 passengers per hour per direction.

INDONESIA
Constitutional Court orders amendments to omnibus job creation law
(29 November 2021) Indonesia’s apex court last week ruled the government’s 2020 Job Creation Law “conditionally unconstitutional” due to procedural flaws—particularly relating to public participation—and ordered the legislature to “redo the legislative process” following prevailing laws and regulation within two years. This means that the law will remain in force and will only be deemed unconstitutional if legislators fail to make amendments by 25 November 2023. President Joko Widodo responded to the ruling by reassuring investors that their investments remain secure, that business will go on as usual, and that the revision of the law will be a priority.

VIETNAM, RUSSIA
Vietnam to expand local production of Sputnik V vaccine
(1 December 2021) Vietnam’s state-owned pharmaceutical company VABIOTECH and investment company Sovico Group signed an agreement with Russia’s sovereign wealth fund, the Russian Direct Investment Fund (RDIF), to increase local production of the Sputnik V vaccine and start manufacturing the one-shot Sputnik Light vaccine in Vietnam. The RDIF also facilitated an agreement between Vietnam’s largest industrial company T&T Group and Russia’s Binnopharm Group for a US$60-70 million Sputnik V production facility in the first Vietnamese-Russian industrial park located in Quang Ninh province. The facility is expected to be fully operational in early 2023 after which it will produce 40 million doses of the vaccine per year.

SOUTH KOREA
South Korea ratifies the RCEP
(2 December 2021) South Korea’s National Assembly ratified the Regional Comprehensive Economic Partnership (RCEP) on 2 December 2021 following the Assembly foreign affairs committee’s approval of the ratification bill the previous day. The RCEP will go into effect on 1 January 2022 for member states who had ratified the agreement earlier and will go into effect for South Korea in early February 2022. This will also be the first trade agreement between South Korea and Japan, which do not have a bilateral trade agreement. South Korea’s exports to RCEP member states accounted for around half of the country’s exports in 2020, totalling US$254.3 billion.

JAPAN
Japan puts border reopening plans on pause
(2 December 2021) The Japanese government briefly banned all inbound flight bookings for December in response to concerns around the Omicron variant before reversing their blanket ban as they took into account the need for flights for returning Japanese nationals. The latest transport ministry directive allows airlines to take new flight bookings with a daily arrival cap of 3,500, down from November’s 5,000 per day limit. Foreign nationals and non-resident foreigners are also temporarily barred from entry, and the government has halted the issuance of visas for special purposes, such as visas for musicians and athletes.

CHINA
China releases five-year green development plan for industrial sectors
(3 December 2021) The Chinese government published a five-year green development plan for its industrial sectors as part of its plans to meet its carbon peak commitment by 2030 and become carbon neutral by 2060. Shorter-term goals include reducing carbon dioxide emissions by 18% and energy intensity by 13.5% by 2025. The plan involves initiatives to encourage the use of clean energy sources such as hydrogen energy and biofuels in its industrial sector, promote the “rational” use of mineral resources, encourage the use of recycled sources, and impose strict carbon controls in its steel, cement, aluminium, and other industrial sectors.