Home / News & Views / CARI Viewpoints / CARI Briefings on How can ASEAN bounce back: An EU perspective

CARI Briefings on How can ASEAN bounce back: An EU perspective 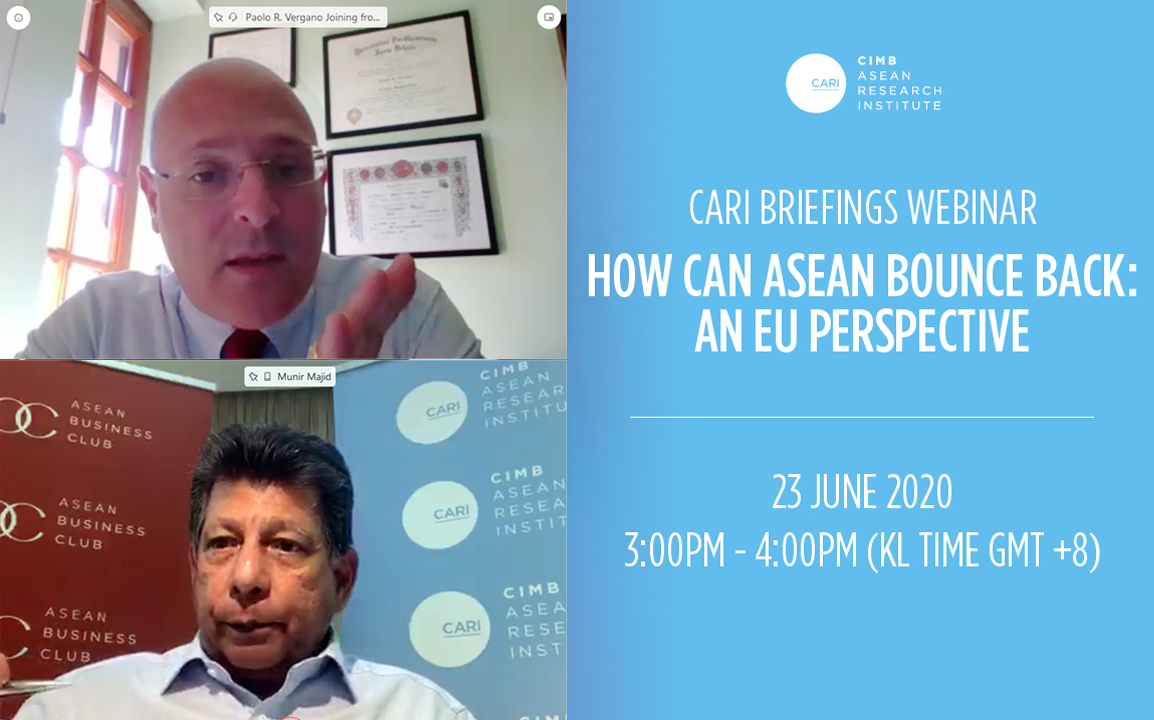 CIMB ASEAN Research Institute (CARI) hosted a CARI Briefings webinar under its COVID-19 Economic Recovery Plan Series, titled ‘How Can ASEAN Bounce Back: An EU Perspective’, on 23 June 2020. The session featured Paolo R. Vergano, Senior Fellow of CARI and Partner at FratiniVergano – European Lawyers, and key expert for trade facilitation in the ARISE Plus project of the ASEAN Regional Integration Support by the EU.

The COVID-19 global pandemic has had major ramifications for the global trading system, with supply chains disrupted and protectionism on the rise. For trade-dependent ASEAN, 2020 will prove to be a painful year economically as the Member States seek to find ways of returning to pre-pandemic growth levels. Paolo sought to provide an answer to this conundrum through a trade and institutional perspective; arguing in favour of greater economic integration within the region and pointing to the EU experience as providing a possible path forward for ASEAN policymakers.

During the briefing, among the key insights shared were:


Paolo observed that with world trade expected to contract by between 13% to 32% in 2020 due to COVID19, ASEAN will no longer be able to depend on external trade as its main economic driver, and should instead foster greater ASEAN economic integration. ASEAN integration should be pushed in favor of what he describes as the present ‘emotional’ response to the pandemic, which was to restrict trade and ban exports. He noted that the European Union encountered the same emotional response, and reacted by placing bans on the exports on foodstuffs. With bans now being lifted, Paolo stresses that policymakers should start to think rationally about how to respond to these challenges.

Stressing the importance of comparing intra-ASEAN and intra-EU trade stats to help facilitate the larger discussion, Paolo first points to the share of intra-ASEAN trade vis-a-vis ASEAN’s total trade. Despite eight years of implementations of various agreements meant to increase intra-regional trade, the percentage share of intra-ASEAN trade actually decreased by 10% between 2010 and 2018. Within the same period, overall ASEAN exports actually increased by 30%. Within the same time period, intra-EU trade increased by roughly 10%. 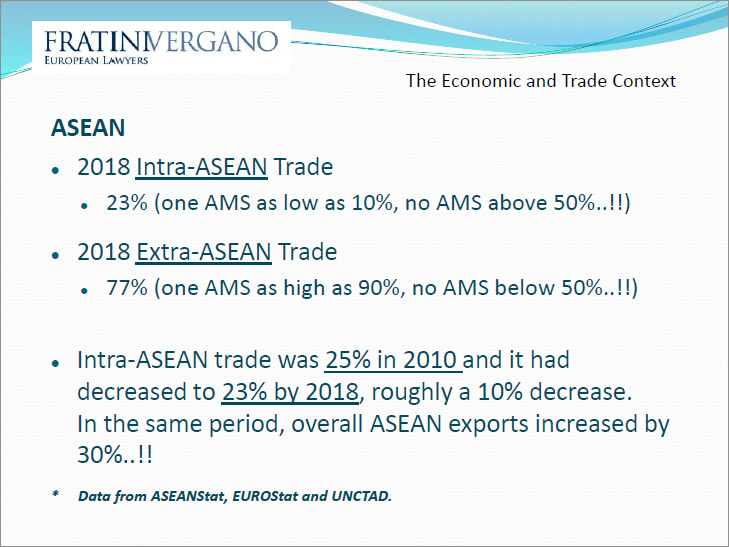 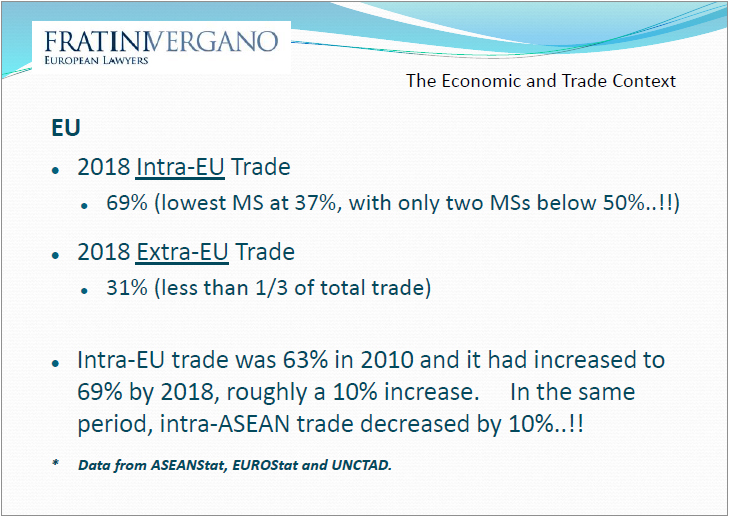 As Paolo stresses, these numbers indicate not just a problem for ASEAN, but also an opportunity. If ASEAN were to lift all restrictions and simplify its trading regime, it has the potential of significantly expanding its economic gains. This has been the objective of most agreements and legal instruments in ASEAN (e.g. ASEAN Trading Goods Agreement, ASEAN Economic Community Blueprint 2025).

So what has been impairing greater intra-regional trade?


Paolo notes that traders and producers need to know about trade-related regulations, legislations, and procedures in place in order to be able to produce and sell their products within ASEAN. As he observes, this transparency is ‘claimed, proclaimed, and sought after in abundance’ in almost every single ASEAN legal instrument. For instance, according to Articles 11 and 40 of the ATIGA, for NTMs and NTMBs, as well as the NTM Guidelines, countries are obliged to notify relevant parties of the implementation of new NTMs. However, between 2013 and 2018, only 180 notifications were made and none within the 60 days of advance notice.

By comparison, the European Union has a number of systems to ensure regulatory transparency. The Technical Regulation Information System (TRIS) requires EU Member States to notify the European Commission of all draft technical regulations (TBTs), with an average of over 700 notifications made every year. 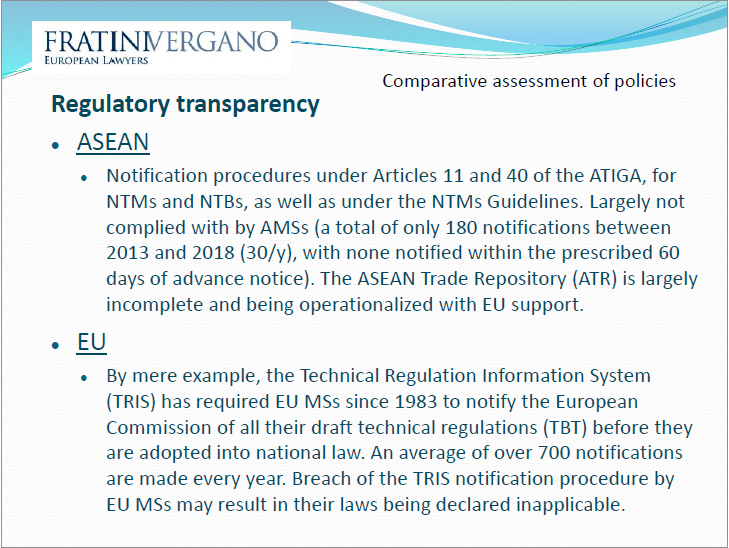 As Paolo notes, ultimately both the EU and ASEAN have different institutional setups. However, regulatory transparency needs to remain a fundamental bedrock upon which everything else builds upon.


While ASEAN rules and commitments tend to be very ambitious, what is less ambitious is the appetite among member states to implement the commitments they have undertaken. The ASEAN Solutions for Investment, Services, and Trade (ASSIST) for B2G solutions to cross-border intra-ASEAN trade issues has seen only 10 cases since 2016, with just one arguably resolved.

By comparison, the EU’s SOLVIT mechanism (the EU’s equivalent of ASEAN’s ASSIST) has dealt with some 10,000 cases within the same period as ASSIST. Over 70% of SOLVIT’s business cases are resolved within an average of 10 weeks. 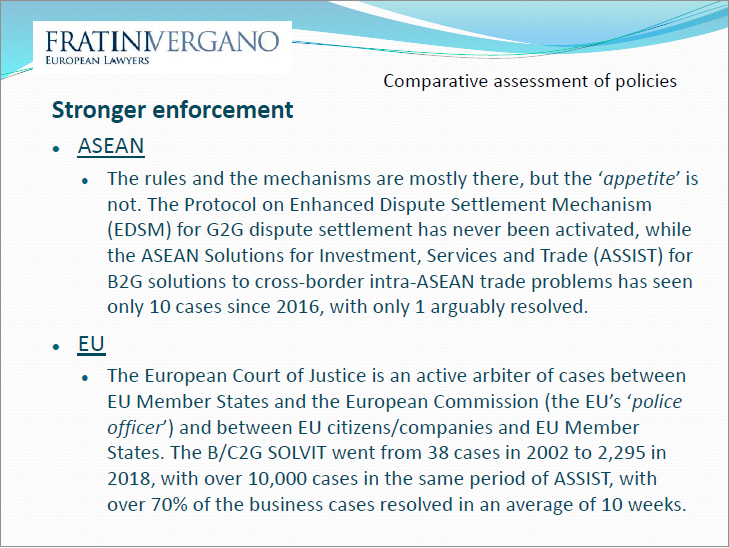 
As Paolo argues, the reason why many rules in ASEAN tend to be cumbersome and difficult to comply with by operators is due to the fact that said rules are implemented in a vacuum, with little to no input from the private sector. Recently, ASEAN has launched the e-Platform for Consultations with Private Sector, a mechanism for ASEAN business action councils (ABACs) and joint business councils (JBCs) of ASEAN to engage with ASEAN sectoral bodies to help improve the process of developing regulations. However, only five consultations have been held so far.

By comparison, the EU has very transparent process where every piece of legislation at regional level is subject to legislative roadmaps, inception and detailed impact assessments (where private sector and civil society groups can interact with the regulators to discuss new pieces of legislation), public hearings before parliaments and the European Commission, stakeholders consultations, expert groups, etc. 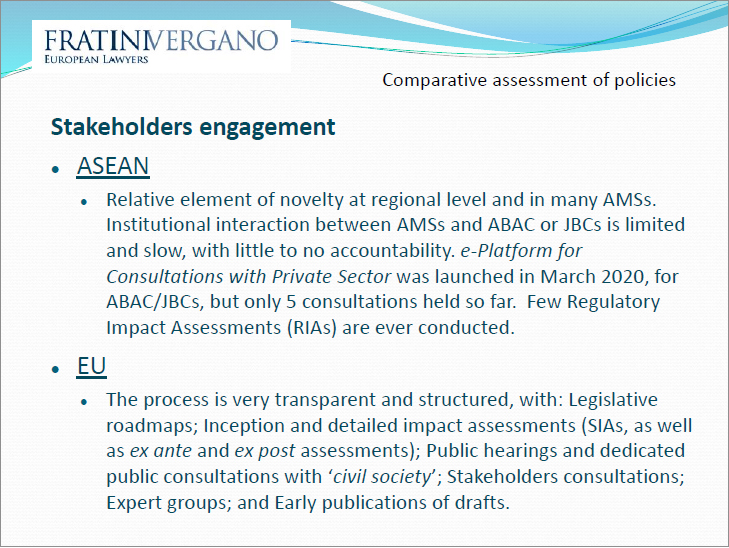 
In his closing remarks, Paolo made a few observations: 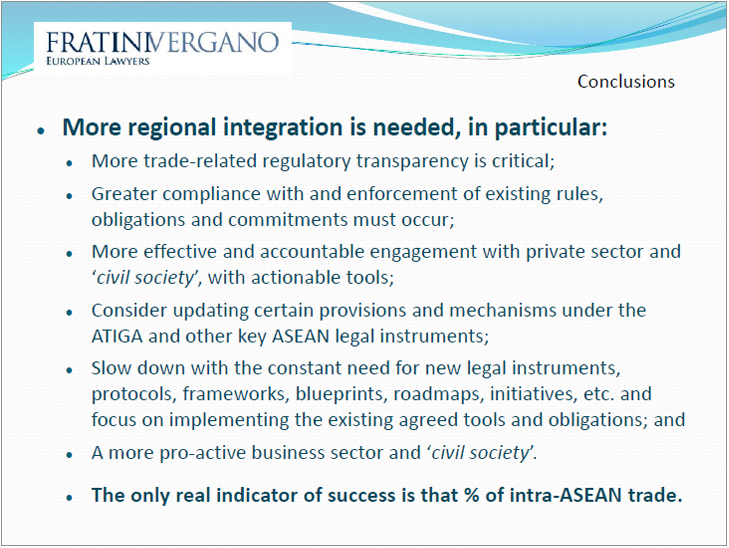 
During the ensuing questions and answers session, the following topics were discussed:
Elimination of NTMs and minimizing NTBs

As Tan Sri Dr. Munir notes, certain ASEAN Member States have been relatively successful in attracting extra-ASEAN investments. For example, Indonesia is currently attracting lots of American investments from US companies relocating from China, while Vietnam recently ratified an FTA with the EU. As such, why should these countries focus on ASEAN then?

Paolo concurs that while all regional blocs, including the EU, will always have an element of inter-state competition between its members, he believes that it is a particular issue in ASEAN. He believes that ASEAN being too dependent on external trade to sustain itself may not be feasible in a post-COVID world. As he points out, the issue of near-shoring may see a lot of foreign production in China simply return home rather than relocate to ASEAN.

Paolo believes that the future for EU-ASEAN collaboration will be ‘very rosy’, and that he remains confident the relationship will remain strong. However, he does not see the prospects of an FTA between ASEAN and the EU due to intra-regional competition between ASEAN Member States. ASEAN Member States with current preferential access to EU market such as Vietnam and Singapore may not like their ASEAN competitors getting the same preferences.